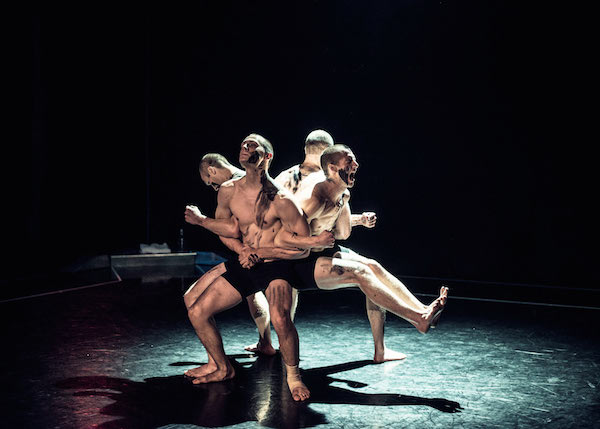 Theatre Parallax’s KATA, could be qualified as a modern dance version of a psychological thriller. The piece elicits strong feelings, though they are mostly of apprehension, revulsion, awe, and fear. In regards that the goal of the show was to drive these feelings out of the audience, it was a resounding success. The programme and press release tell the story most clearly of the show: four male dancers have been honed and developed since birth to be perfect soldiers, raised in a hyper-masculine dystopian world. Put on display for the audience, the investors, KATA asks us to decide whether the breeding of men simply for strength, determination, reproduction, and aggression is a viable investment. Exploration using space, reactions with sound- and video-scape, and effective prop use gives this performance its effective nature.

The show begins with the “birth” of these four test subjects, and one can’t help but be reminded of The Matrix, where newly formed and awakened human forms thrash naked and bald in embryonic goo. They are run through rigorous physical tests, fight training, and hygienic cleansing. The dancers used their physical prowess to create interesting effects, such as being hung on a line and slid along a conveyer hanger, on display for our viewing pleasure. I found myself both interested and disgusted by this type of display, and knew that this reaction is a goal of many performance arts pieces. KATA also showed a transition in time passing well, incorporating development of the subjects’ mental statuses, physical abilities, and aggression levels. However, although I absolutely believed in each of these men as a test subject in a twisted game, I didn’t believe them as fighters. Sections of the piece that were more dance-oriented featured fighting movements punctuated with breathing patterns or yells. I just missed a certain commitment to completion of movement and realism in these men, perhaps they held themselves separate from the floor, instead of using it at their fuel for movement.

Attending KATA in the Dancemakers theatre was a positive aspect from the show, with the audience being able to surround the stage on three sides, and sit in close proximity to the dancers. It made the effect of sitting as some sort of investor to a human trafficking ring that much more attainable. Although what interests me most about this show is not the physicality, movements, music, or set. It is the dancers’ experience: the rigorous physical regiment they have undergone for four months leading up to the show, buzzed haircuts, and heavy dietary restrictions, let alone the potentially psychologically damaging effects of performing this piece days in a row. In conclusion, KATA is certainly not a show for the squeamish, nor faint of heart. There were some moments on stage that had me physically recoil in my seat, nose wrinkled, clutching the armrests. On the other hand, KATA is a wonderfully developed performance piece on the cutting edge of many of the common philosophical arguments of our day, and is thoroughly thought provoking and enjoyable.