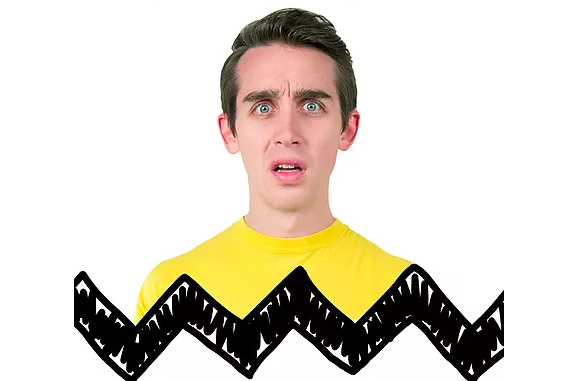 I’ve seen a lot of theatre this November but nothing’s surprised me quite like Echo Productions’ Dog Sees God, a tiny, under-marketed labour of love with only one week left in The Second City’s John Candy Box Theatre around the corner and two flights up from the rowdy mainspace. The trappings read like student theatre- a young cast, a nothing set, off-stage characters sit off to the side in plain view, a small audience of mostly friends, clunky blackout transitions- but it’s been a long time since I’ve seen anything with the sincerity and emotional complexity of Dog Sees God.

12 years after its first performance, Bert V. Royal’s dark comedy about the Peanuts characters as adolescents feels a little dated- not as dated as it should feel, but dated nonetheless- and some of its characters retain too much of their cartoonish simplicity and are left behind by the real humans that surround them (poor Marcy is dull as rocks, despite the valiant efforts of Sara Jackson). Director Victoria Fuller acknowledges the text’s flaws and makes the most of them, placing the production out of time in a larger-than-life colour-coded world where two dimensionality is the norm that three dimensional CB (Charlie Brown, Thomas Duplessie) is breaking with his rejection of binary labels and easy answers.

In this hypothetical adolescence, Schroeder is called Beethoven (an engagingly mercurial Eric Rich), a smart and funny but brutally bullied gay kid whose method of coping looks more like hiding. Adrian Yearwood plays germaphobic/homophobic poser Matt who beats you up if you call him Pigpen. Olivia Clarke is deliciously vicious as Tricia, a popular girl who is purposefully nothing like the Peppermint Patty we knew. The best (in my opinion but why argue) Peanuts character Lucy is revealed to be institutionalized for pyromania. Courtney Lamanna (a MyTheatre Award-winning actress I associate with subtle, deeply felt performances) confusingly plays Lucy very broadly, more wide-eyed crazy than sad-eyed wounded. The subtlety mantle is carried far more by her brother Linus, appropriately transitioned from child philosopher to teenaged stoner and played here by Stephen Mashalidis with thoughtfulness and gentleness that perfectly conveys the character despite how under-written he is. “CB’s Sister”, as played by the awesome Sheri Anne Godda showing off her incredible range, doesn’t have much in common with her cartoon predecessor Sally but her chameleon act is what really defines the world of the play, capturing in one recurring joke the panicked searching for self that makes high school such a horror show.

Grounded by Duplessie’s alluring introspection and strong chemistry with Rich, enlivened by Nathan Bonafacio’s music choices and a cast of spirited supporting players, Echo’s Dog Sees God is so much more than the sum of its scrappy parts. It speaks with honesty, it cleverly manipulates nostalgia, and it brought up the only tear my eye’s seen in a month of too much theatre. You should go. Tickets HERE.