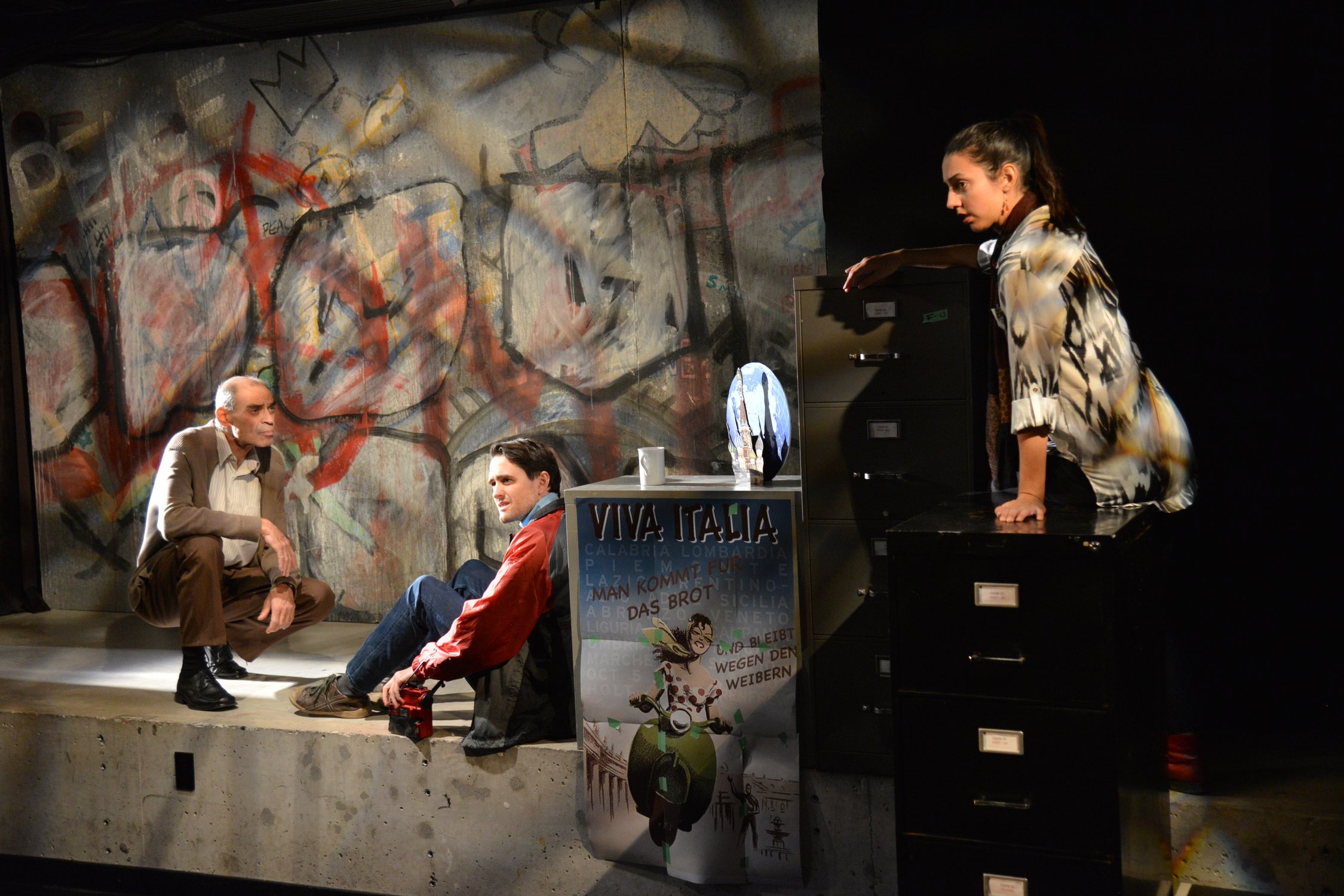 Agency at The Theatre Centre

What I loved most about Yell Rebel’s Agency is its originality. I’ve never experienced a story of this sort before. A young women, Hannah (Eva Barrie), shows up at a travel agency in a former East Berlin neighbourhood determined to learn what really happened to her father after her family fled to West Berlin. After having done some inconclusive research, she is not convinced of the cause of his death. So she seeks answers from Thomas (Earl Pastko), the man who presumably spied on him. The new script is thrilling and quirky, full of twists and turns, as well as, emotionally complex characters. After all, this agency appears to use Expedia to book flights, and this agent hides drugs in a fake computer!

At the helm of this star-studded cast is actor-playwright Barrie. She captures the gist of the play best in her notes: “I desperately desire to see things in black and white – it’s easier. But that’s not how people work. People live in the grey zone.” All three characters in this piece, indeed, float idly between truths and lies, choosing strategically when and what to share about the past. It’s frustrating but that’s what keeps us enthralled. Once you realize that a third character interacting with Thomas is, in fact, the spirit of Hannah’s father, Peter (Ben Sanders), you settle into an uneasy, yet poetic journey back and forth between 2012 and 1980s Germany. Why did Thomas spy on his friend and colleague Peter? At times you think Thomas may have killed Peter. Then you are led to believe they may have been lovers.

One of the most thought out motifs I’ve seen on stage was that of fragile birds. They intricately linked past to present. Hannah’s interrogation of Thomas is periodically interrupted by a strange thump that we learn is the sound of birds crashing into the office window. It’s peculiar that this does not bother Thomas. Flashback to Hannah’s childhood: a sweet and frantic young girl swaddles an injured bird as her father, unknowingly to her, is physically attacking her mother inside. And in a flashback further back in time we see an excited Peter showing off his similarly swaddled newborn daughter. Barrie almost makes it too easy to fall in love with her character; you just want her to find all the answers to her questions so she can finally have some peace of mind, and come to terms with a tumultuous past.

The design of the show (Karyn McCallum) has us intrigued from the start, and is well utilized. It is great to see lots of levels on stage for once, with the upstage area elevated, and entrances and exits visible to us on set. The upstage transitions simply from Peter’s apartment to the childhood home of Hannah to a Berlin Wall hangout – amidst the wonderful display of graffiti.

Keen direction (Megan Watson) must be behind the careful attention to detail throughout the production. The entire cast does very well despite an almost empty audience. I have a strange feeling that this show would resonate tenfold given some more energy in the room for the actors to play off of. All in all, a very entertaining night out.