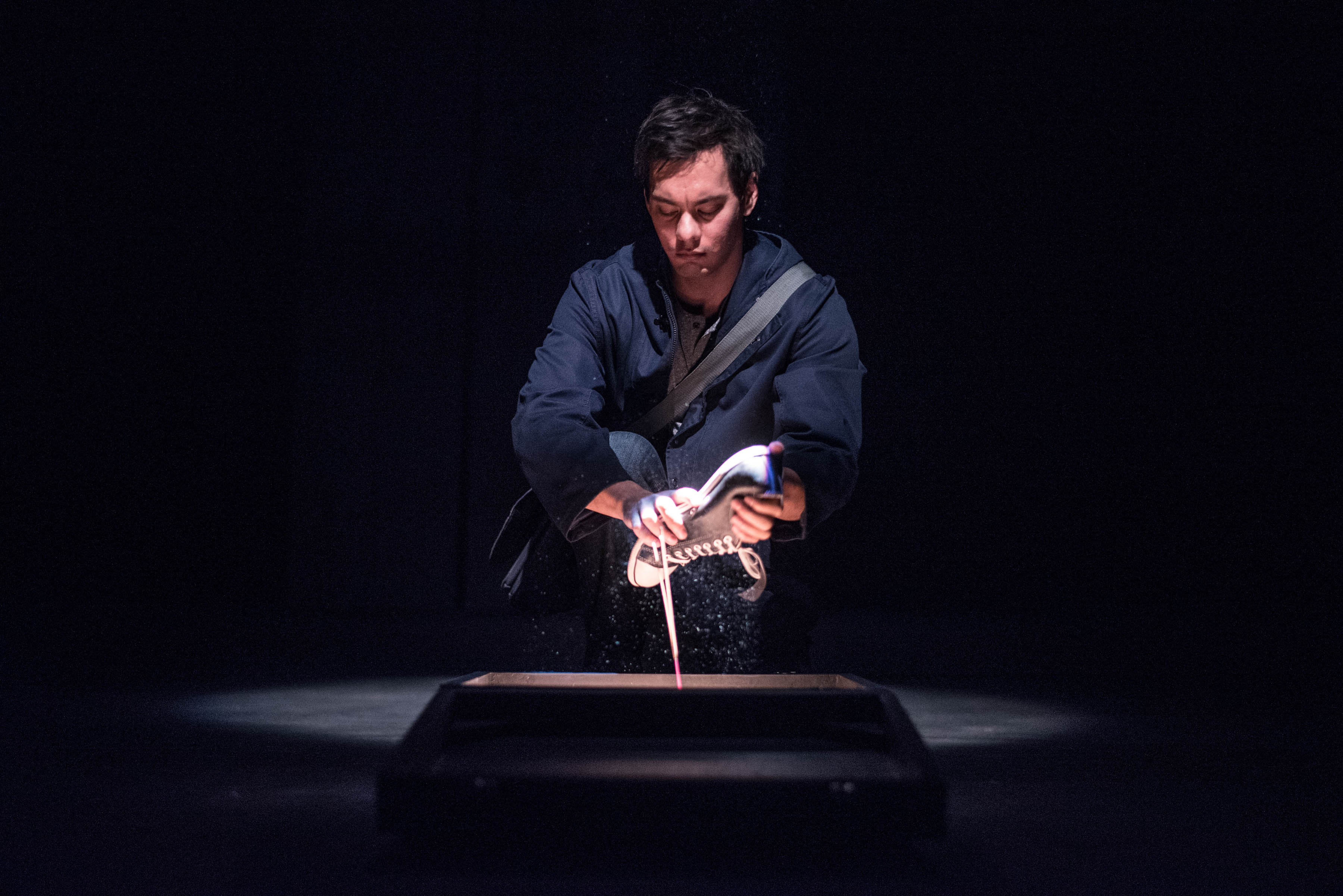 The beautiful geometric highrises are dark grey, crisp and askew, creating a darkly modern, if slightly nightmarish cityscape which the audience observes as we wait for Acquiesce to begin. Downstage centre, an open briefcase is slightly illuminated with a gentle tungsten spotlight from above. Then, without warning— no dimming of the lights, no audio cue—  something begins falling from above, perfectly within the light of the spotlight, directly into the briefcase. What is it? Is it grain? Or is it ash, or sand? It looks like a river of gold…. whatever it is, it’s beautiful. And the audience goes quiet, as we watch. The lights dim, and I can breathe again, as David Yee, playwright and main character, Sin Hwang, walks on stage. This startlingly beautiful, yet excruciatingly gentle opening sets the tone for the world debut of Acquiesce, by David Yee, directed by Nina Lee Aquino, and the first play of Factory Theatre’s much anticipated Beyond the Great White North 16/17 Season. This beautiful mix of complex and evocative visual metaphors,  strong, strange stage moments, startlingly simple movement transitions, and excellent performances, make’s fu-GEN’s Acquiesce a performance not to miss.

The story involves Sin Hwang’s (David Yee) sudden trip from Toronto to Hong Kong after the death of his father. There, he meets mystery cousin Kai (Richard Lee), and is confronted with a list of obscure tasks that are somewhere between traditional Chinese duties and fairytale-esq quests. Haunted by memories of his girlfriend Nine (Rosie Simon), and helped and hindered by a number of strange characters (John Ng), Sin— lost in translation— is taken on a journey of self-discovery, spiritual exploration and perhaps even forgiveness. But this is not your traditional boy-meet-culture, second-generation-Canadian tale. Instead, Yee has weaved Buddhist folklore and metaphors with magical realism and surrealist comedy. What results is a unique performance, one that explores the complexity of culture, family and legacy and packs a proverbial punch.

What struck me most about Acquiesce was the strength of it’s writing and the depth of it visual metaphors. So many powerful images are still running around my head: What is the symbolism of a trash-talking paddington bear, purchased in Heathrow airport and living in Hong Kong? What is the relevance of an author who can never find a pen? What of the briefcase, carried throughout the play, filled with dirt, fire, light, and water? And what of the pearl that characters routinely cough up during the show?  There are many possible answer to these questions— some of which resonate with the play’s themes of translation, cyclical life, or interconnectedness. And it is perhaps here, where, like the character of Sin himself, I give up the role of translator, and instead, reflect gently on the beautiful stage design, strong transitions, and excellent performances in Acquiesce. This, strange, funny, heart-breakingly beautiful show gives us a journey of self, family and spirituality that is difficult to put into words. And that is perhaps the point.