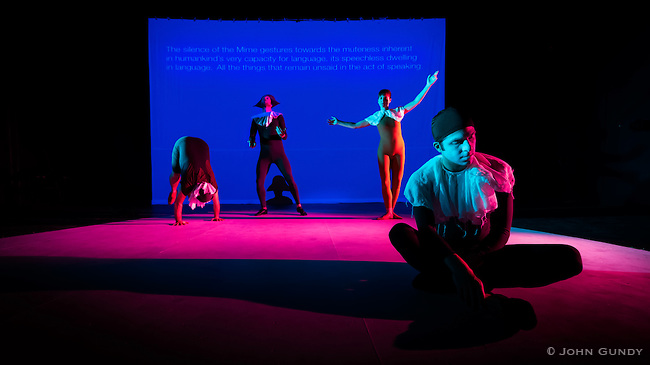 Bad New Days in the Absence of Textual Dialogue

Bad New Days recently premiered their intriguing double bill Italian Mime Suicide & Three Red Days at The Theatre Centre. Both pieces take on a physical approach to delve in to the complex topic of politics and art, using mime. The absence of words to clutter our minds presents an opportunity to focus closer on the issues and art form at hand.

Simply-put, Three Red Days is anxiety-inducing. Without a doubt, the absence of words from the narrative heightens the stakes as we anxiously await the fate of Shostakovich, a composer who lived under the totalitarian USSR government. More importantly, the absence of dialogue allows us to become enchanted by the technical elements such as a vivid projection of only Stalin’s torso. Set and Projection designer Anahita Dehbonehie is smart to be minimal in this regard. A notable scene is when the official interrogator who doubles as Shostakovich’s wife (Miranda Calderon), along with three men (Rob Feetham, Adam Paolozza and Viktor Lukawski), shockingly begin to pull out an endless stream of recording tape from their suitcases and clothing. I assume this represents the realization and paranoia of (the composer) living under government surveillance. Since the gestures of the three men are sometimes synced, sometimes not, I am not sure if they are meant to act as doubles for the protagonist, like a Greek chorus – another ancient performance feature – or, perhaps, representatives of other oppressed composers of the time. The music underscoring the piece most appropriately compliments the highs and lows of the action (Sam Sholdice).

In Italian Mime Suicide – the much more clearly executed of the two – we are offered some comic relief as the chorus of mimes appear to explore their relevance. I loved the use of an exercise ball as a large “balloon” which Feetham brilliantly tumbles over in more ways than one, demonstrating the importance of play with this artform. A live band is visible to the audience, an element I loved. It helped highlight certain moments better. In fact, it made me wish the musicians (Arif Mirabdolbaghi, Justin Ruppel, Bruce Mackinnon) were present in the first piece too, even if subtly tucked away behind a scrim. Actor-Director Paolozza demonstrates a profound connection to this story, putting his heart into every gesture, beginning with an introspective transformation, gazing at the audience as he applies white grease paint. The tragic climax is ironically the most beautifully staged moment, with a white ladder leading up to the moon and stars – wonderfully alluded to in other staging and projection elements earlier on (Dehbonehie). An odd turn of events is a staged fake talk-back with the audience in which the complete ensemble interviews Paolozza who, of course, is not allowed to speak. While funny, I was distracted asking myself why a show with an important theme, talented able-bodied performers, and the power to transform physically and visually without text decided to break its format. Is it a mockery of contemporary tendencies which try to “talk” about things we cannot easily define, or mediums such as reality TV which try to tell us what is real? All in all, it is easier to appreciate the second-half for its non-traditional narrative (as the plays director deems it) because the gist of the story is more easily understood.

It’s clear that this double bill wishes to challenge our notions of art: what it can represent and how. The relevance of traditional performance arts in a world where culture as we once knew it is diminishing every day is an important topic. While the pay-what-you-can after the show format is certainly an innovative approach to making theatre accessible, it does not necessarily make the content accessible. I worry that the show’s abstractedness resonates more for performers themselves who have a higher stake in the evolution of artistic practices. I hope individuals working outside of the performance realm have as much opportunity to appreciate the significance of niche artistic practices such as mime, clown, masque, and puppetry. And I hope these practices continue to reflect various political realities while still inciting deep emotions not always afforded by written text.