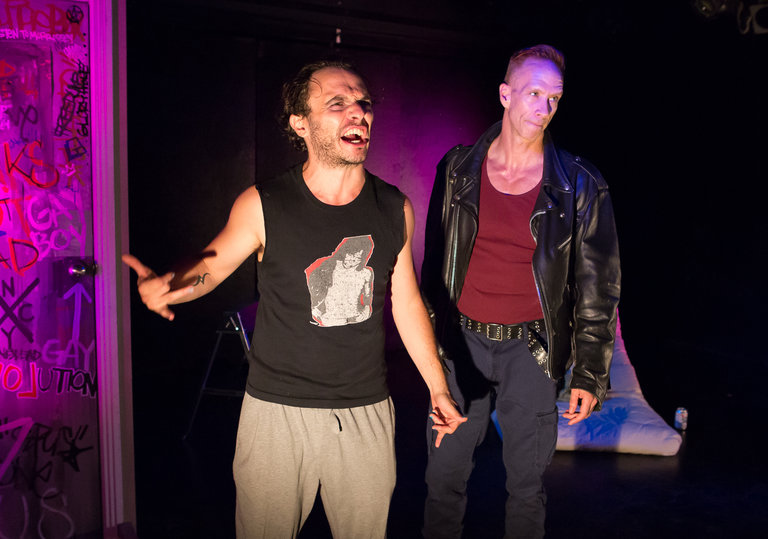 J. Stephen Brantley has a distinct voice for re-creating the New York of yesteryear – to paint a picture of the gritty pre-Giuliani New York that I only know from films and rerun credits of Saturday Night Live. Of course, living in the city during that time was bound to have some lasting effects, and those are the stories that Brantley seems most keen on telling. His creative endeavor, The Jamb, is no exception. Brantley’s work frequently explores the intersection of sexuality and heavy drug use, and how breaking the cycle of substance abuse alone is insufficient to bring about self-acceptance and self-fulfillment. The Jamb introduces two men who are caught in a battle with their insecurities as they search for meaningful engagement in life. They are also stuck in the closet doorjamb about their own relationship – not quite accepting of their feelings for one another, which have been simmering below the surface for years, nor unwilling to deny the sexual tension.

Set in 2008 just before President Obama’s historic election, The Jamb depicts the relationship between trust fund baby and addict Tuffer who, on the cusp of turning 40, is regularly dancing the night away in clubs and bedding a Parsons student named Brandon who almost never understands his pop-culture references. After a bad night, his friend Roderick shows up and tells Tuffer that it is time to clean up his act. Eager to take Tuffer away from the drug Sirens of the city, the pair and Brandon head to Roderick’s mother’s home in New Mexico. A retired folk singer who has never outgrown her 1960s hippy persona, Abigail supports Tuffer’s rehabilitation while soothing her own prodigal son who has outwardly built a relatively stable life for himself but struggles to control inner demons as well. This mecca home leads to revelations about the men’s approaches to relationships, and to life, and starts them on a more personally fulfilling path.

One of Brantley’s strengths as a writer is his ability to craft realistic and compelling characters. Products of their childhood experiences and of living in the drug-laced rave that was the East Village in the late 80s and early 90s in New York City, Tuffer and Roderick are fascinating juxtapositions to young, doe-eyed Brandon. While it is possible to draw comparisons between Tuffer and any privileged young man who shirks responsibility and has fallen into the grasp of addiction, there is almost an ethereal quality to Tuffer who senses pain in others and has somehow managed to cling to life despite engaging in risky behavior for decades. Roderick, on the other hand, appears to embrace the life of a responsible adult, but his steely façade shows how dissatisfied he is with the lack of purpose in his life – as his mother points out, he is opposed to a great many things, but it is unclear what he supports. Tuffer and Roderick are meandering through life with different demons but similar disengagement.

The Jamb occasionally stumbles over its own narrative with flashbacks interrupting the flow of the tale. David Drake’s direction during these interludes can feel heavy-handed at times, with needlessly busy staging that distracts from the intriguing chronicle presented by the characters. However, these critiques are minor when considering the totality of the production, which is a powerful reflection on the challenges that one faces in the search for self-acceptance and the relationship possibilities that arise when one is at peace with him or herself, all explored in a skillfully devised and smartly written theatrical package (dressed up in grunge clothing).

Featuring a small ensemble, the four members of The Jamb cast compliment one another well. Of particular note are the performances of Carole Monferdini as Roderick’s mother Abigail and J. Stephen Brantley as Roderick. Monferdini exudes a natural grace and wisdom in her role as Roderick’s mother, but she also infuses a touch of levity and unpredictability into her performance, which befits the character and lightens somber moments in the show. A human oxymoron, she somehow manages to come across as both slightly crazy and extremely grounded, which is no small feat. Brantley displays an unparalleled depth of emotion onstage as Roderick, which both terrifies and transfixes. His anger feels palpable and raw, his passion frenzied and a bit domineering and his frustration heartbreaking. To his credit as a performer, Brantley’s performance ranks among the most believable and visceral that I have ever seen on stage in some time.

Ultimately, The Jamb has many of the trademarks of a J. Stephen Brantley work, from the gritty New York backdrop to the crippling drug addiction to the complexity of human relationships. However, Brantley uses these elements to craft intricate characters that may be damaged and struggling but are also grippingly authentic and relatable in many ways. It is clear that Brantley has given careful thought to the backstories, experiences and motivations that propel his creations and that he understands the forces that drive them. The beneficiaries of this artistic diligence are the audience members who have an opportunity to live in the world of Brantley’s creations for a short time.