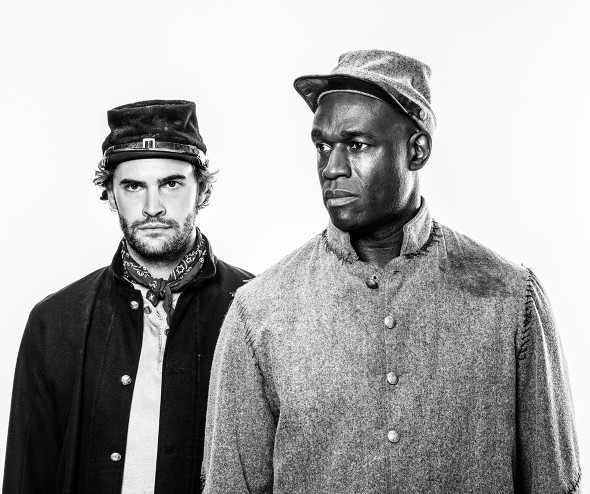 Father Comes Home from the Wars at the Royal Court

It’s a grind to attend three hours of theatre. But grinds aren’t always bad. Sometimes, the alienation that accompanies “why I am watching this?” can induce some valuable critical distance. There are good questions to be raised about Suzan-Lori Parks’ Father Comes Home from the Wars. In the process of watching it: “why three parts?”, “are these three parts ‘plays’ as the programme appoints them, or are they dependent acts of a larger work?”. But what I actually asked during the performance was different. “When will it end?” is the concern of this particular production at the Royal Court.

It’s not all Parks’ fault, I think. The language is analytical enough to avoid sensationalism, which is pretty essential in the story’s context. FCHFW is a tale about slavery during the American Civil War. Visual media about slavery—and I mean stories about slaves, not Amazing Grace—is problematic, and recent popular films about it (all coming from the US; Steve McQueen is British but 12 Years of a Slave is entirely American in sensibility) are pitched, gallingly, at white audiences, with guilt-assuaging narratives and compromising forms. Maybe Birth of a Nation will change things, if Nate Parker’s reputation doesn’t keep audiences away.

Theatre, with its attendant patience, is a better home for critical dissection than Hollywood, though it’s odd, to be sure, that the subject is staged here in Britain: we aren’t nearly as horrified by our slave-owning past as our colonial crimes (the labour in former colonies was often slavery proper, but we’re talking about it in the country itself). Our black population is mostly Windrush and beyond; we had no substantive equal to Reconstruction that is so important to this play. The blurb line “Black Americans will always be branded with ‘the mark of the marketplace’” doesn’t nail down the race relations in our country. I can’t speak for others, though I note there were fewer black audience members proportionally than in attendance for Torn upstairs, and only half of that cast is BME.

So a plot in three plays: Hero (skilfully played by Steve Toussaint), the biggest, strongest slave on a Texan plantation cannot make his mind up over whether to join his master, the Colonel, when he goes fighting the Union in the war. Hero’s fellow workers make bets on him staying or leaving. He leaves (not a spoiler, because the title Brecht-aly spoils it for you), abandoning his wife and the confrontation due with Homer, a man he ratted out after he tried to escape. Play two is a three-hander with the Colonel (a sickly debonair John Stahl), Hero and Smith, a Yankee POW. Play three is Hero’s ignominious return.

Parks sets up dramatic conflict in droves but never develops it. Hero is called upon to fight against his own cause: meaty, but the script is all introductions to problems and never a conclusion or even a main body paragraph. Like to the aforementioned quote about the “mark of the marketplace”; yes, racial politics in the Reconstruction and the now were and are awful. We know this. Tell us what we don’t know. There is, regardless, a critical edge bundled in with the form, and it’s usually delivered in Brechtian asides to the audience which Parks smugly stresses in her production notes (“I’m widely employing the convention of direct address to the audience. Enjoy”. I’m sure I will!). These breaks could be useful. They could allow characters to underscore the subtext by speaking it directly to us and out loud. But it comes to nada in the actual production.

Emilio Sosa’s costumes provide an anachronistic mix, decidedly not the garb of slaves. This hash makes it contemporary by making it odd. The direction and set conversely use that same V-effect with no competence whatsoever. Neil Patel’s design is the abstract-but-not-really category of design described here and Jo Bonney’s direction is both blandly natural and Brecht-lite. More than anything it’s the watering down of the presentational that makes the three hours so ponderous, not the intentional crawl of the pacing. An example: Steven Bargonetti strums a guitar, playing songs Parks wrote herself and bookending the individual plays. He sits on the stage for the action in between. A modern-day guitar player onstage for the entirety of the play: that should make him conspicuous. Yet he’s not. Hero acknowledges him once and that’s it. Why put him there? Nothing that could jar in Bonney’s production does.

Father Comes Home from the Wars is frustrating. In some ways that’s precisely the aim: Hero is capricious and doesn’t act as the audience wishes. You want to dislike him in a terrifyingly immoral way. At the same time, the dissection of his actions is absent from the performance itself, despite being absolutely key to the script. When already fighting for relevance, this bungled staging is a death blow.