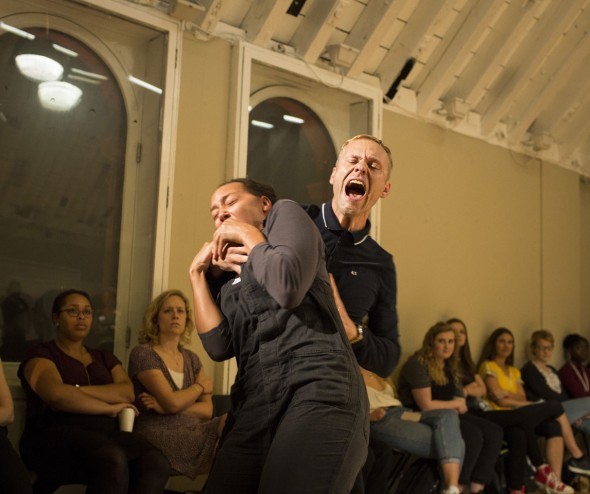 Torn at the Royal Court

A lot of Royal Court’s Upstairs programming is too dry for its own good. Not this. Nathaniel Martello-White’s Torn wears complexity on its sleeve.

Angel arranges a circle of seats and then her family into a room, like an AA meeting, and wants to tackle the wrongs in her life.

We don’t know her problem, who these people are, even if they’re her family. It’s confusing. Dialogue’s very quick, clipped, overlapping, and specific without being necessarily that expository—“When you ran. Away that time, ran away. And we were all worried”—and you get a vague idea of it before it loosens. Asthmatic opening, but it’s purposeful.

Her life and twisted family bonds are dense. Compacting this is the narrative: all over the place (a good thing, mind you). Director Richard Twyman makes past, present, future flow into each other. Lack of indexes by designer Ultz doesn’t clear things up. You get lost. Fair, because Angel is lost too.

Then strands are more visible: an abuse tale, but concerned with rape culture (that the lack of support for victims can exceed the trauma of the act itself). Then an intersection of racism and child abuse makes the politics more difficult to talk about. More on it later.

And race is central to the morass. Mixed-race 1st Twin chooses white life, focussing on her white children and forgoing her black children. White Steve rapes black Angel (offstage). Economic and social abuse is compared with sexual abuse in a harrowing monologue: Steve likens his domination—note the word’s multiplicity—over Angel to that of a slave owner over a ‘house slave’ (he uses different terminology in the play). Rape has obviously has meaning beyond sexual context but combined with the play’s form, fractured narrative and foreboding, this framing of it is potent. It being offstage and denied, shut away by the establishment of the household—there are Yewtree references in there too—adds to the wicked complicity of it.

There are other angles: Couzin and Brotha wrestle with masculinity; Nanny’s iconoclastic marriage; the stances of Aunty L, Aunty J, 2nd Twin re care. These are underdeveloped.

Structurally, Torn climaxes in Steve’s monologue. The journey of bundled narrative to clear presentation ends too clear. Post-climax, it’s tied together too neatly: not emotionally, but plot wise. The tension peters out.

Martello-White was in People, Places, Things. Two elements from that manifest here. The AA meeting of 8 chairs in a circle that informs proxemics. Good. Angel is meticulous in making an octagon to see each person’s angle equally, but by the end the chairs are in disarray. The other element: like his Mark character in PPT, Martello-White’s creations have a high register. Weirdly poetic language. Whereas used for contrast in Macmillan’s play, here the diction is out of place but also lifts you from the fear of the piece. It’s counter-productive.

So Torn at its best is an ideal meeting of form and content. Twyman is necessary in its success, emphasising the moment out of a fragmentary script. And an outstanding cast help him. Indra Ové gives the most impressive performance, working through a minefield of empathy.

Martello-White is as good writing a part as he is performing one. Really good. So is Twyman. Torn is rich and innovative.