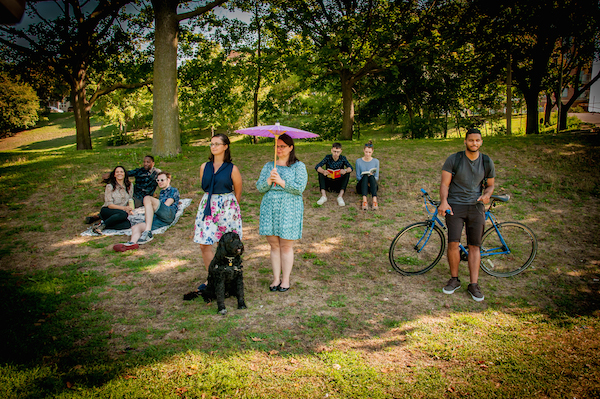 Friday night, Bad Dog Theatre Company premiered the first two new formats in their fall season: Past Dark and La Grande Jatte. Because the improv company’s Bloor West theatre offers the best deal in town (see an additional show for only $5!), I stayed for the 11pm performance of fan favourite Network Notes as well.

Created by Etan Muskat, Past Dark is your basic longform improv comedy piece. The Stranger Things-esque story is largely defined by just one or two audience suggestions, so the hit-or-miss cast of Past Dark is really at the mercy of the crowd. On opening night, the suggestions did not break in their favour and they found themselves having to build their show around the idea of toilet monsters (dear improv audience members: please grow up; no one thinks you’re funny). The most succesful cast members negotiated around the brutal suggestion with impressive grace- Daniel Beirne focused on world building, always the first to jump in with a sound effect, a stage direction or to play a non-human set piece; Liz Johnston focused on character, quickly developing a kid sister archetype into the precocious slicker-clad hero of the story. It’s a topical concept but it’s also a familiar one, resulting in a show that’s entertaining but not all that memorable.

Network Notes is similarly as-expected in terms of comedy style but its serialized central characters and strategic use of audience suggestions set it up for a more reliable rate of return than you can usually expect from improv. Evany Rosen and Kayla Lorette have built such strong foundations for their trashy network executive characters that their interplay is as organic as it is outlandish. The wild cards are the various duos of guest stars who come in to “pitch movie ideas” (ie: improvise scenes based on an audience suggested title and genre). It was a mixed bag result on Friday with one duo completely bombing, another squandering a great concept with messy execution, and the other executing wonderfully a somewhat half-baked concept, but the pitchers are really just there to set up Rosen and Lorette’s numerous homeruns, making Network Notes the closest thing to an improv format that’s going to work every time.

Then there’s La Grande Jatte, a new format created by Bad Dog Artistic Director Julie Dumais Osborne (which actually happens in between Past Dark and Network Notes at 9:30 on Fridays but I wanted to save it for last). Unlike Network Notes, everything about La Grande Jatte is entirely new every single time- its characters are inspired by a location, which is the only audience suggestion at play- but I’m pretty confident that you’re just as unlikely to ever see a bad show. That’s mostly because of the cast, an all-star Bad Dog ensemble. Improv works best when there’s a good balance of power within the group- no one’s hiding in the back or stealing all the limelight, the pros don’t have to rescue less experienced players who paint themselves into a corner- and only a cast this consistent really achieves that key balance. Dumais Osborne’s excellent concept and direction shows each cast member off perfectly with vignette-style storytelling that adds up to one really satisfying big picture.

The show begins with the cast assembling onstage to create an original tableau inspired by Georges Seurat’s impressionist painting “A Sunday Afternoon on the Island of la Grande Jatte” (aka the Sunday in the Park with George painting). They’re in an audience-suggested location (on opening night it was IKEA), each frozen while minding their own business- helping a customer, shopping for blinds, eating meatballs, etc. We “zoom in” on one person (or pair) and explore their story, then the cast returns to their tableau and we zoom in on someone else until every character’s story has been told, or at least touched on. Most intriguingly, Dumais Osborne has put a directorial presence into her format without appearing onstage herself, giving the performers not in a particular scene the power to manipulate what we’re seeing- switching out actors, changing the audience’s viewpoint by turning the action around, even manipulating time by indicating that they’d like to see the character at a younger age, all communicated with dance-like hand motions. This internal direction adds to the already remarkable connectivity on display as the performers interpret, participate in and guide each others’ stories, finding throughlines and major themes in unexpected places.

The success of True Blue having proven the potential of dramatic improv, the company of La Grande Jatte smartly dabbles with the darker side of their storytelling rather than pushing the jokes too hard (though there are, of course, plenty of jokes). Anders Yates starts out as a joyful kid playing in a ball pit but that image spins into a melancholy story of a single mother with abandonment issues when Hannah Spear enters the frame and uses what Yates established to inform her own tableau character- an overworked cashier. The empathetic grownup incarnation of Yates’ character then becomes the only co-worker who shows up for Jan Caruana’s Bachelor viewing party (the night’s shortest scene but the one that almost made me cry). Nigel Downer provided the night’s biggest laughs as a befuddled boyfriend and cop whose partner (a very charming Andrew Bushell) is trying to steal his girlfriend, the incredible Amy Matysio effortlessly matching her love triangle’s big laughs but always bringing the story back down to a relentlessly true place.

La Grande Jatte is being marketed as a follow-up to the company’s very popular Toronto, I Love You, and that lineage is definitely evident in the vignette form and fundamental sincerity of the piece, but La Grande Jatte is on an entirely new level. Dumais Osborne’s thoughtful new format marries an ambitious concept with unexpected style elements and the perfect cast; the result is Bad Dog’s best work yet.