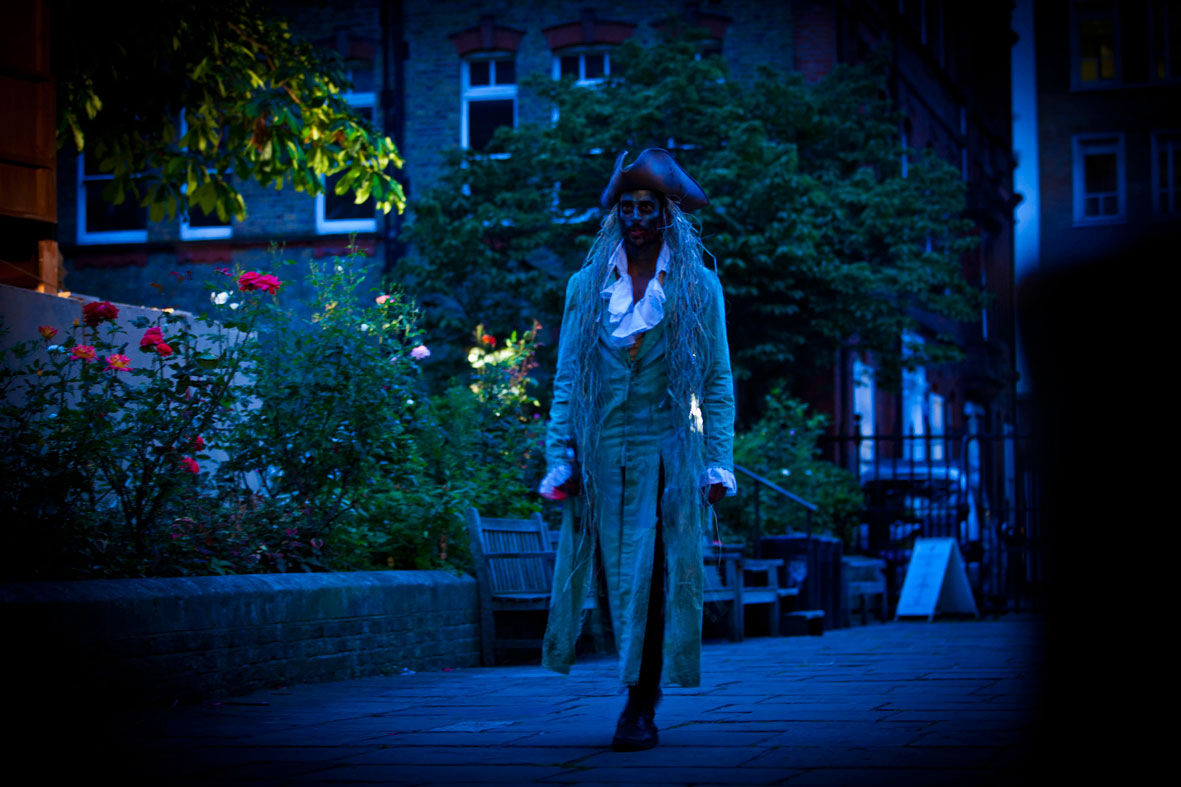 Staged within the pretty grounds and interior of the wonderfully fitting 17th century St Paul’s Church (the Actor’s Church) and situated in the heart of busy Covent Garden, Treasure Island is the second in-house summer production by the Iris Theatre. It is a new take on the Robert Louis Stevenson classic, billed as an immersive, swashbuckling and family-friendly adventure suitable for kids aged 6 and up. A promenade performance, Treasure Island takes the audience on both a theatrical and physical voyage from scene to scene, following the cabin-boy, Jim Hawkins (Harold Addo), treacherous cook, Long John Silver (Dafydd Gwyn Howells), and the other crew of the Hispaniola in their search for the fabled Flint’s treasure. Charming, engaging and thoroughly creative throughout, Treasure Island overcomes some (but not all) of the problems that a promenade performances can bring in providing a story that prospective pirates both young and old are sure to enjoy.

The story is, of course, well-told and well-performed in many types of media, including on the stage and in film; it is inexorably linked to piracy in modern popular culture. In fact, many believe the typical ‘pirate accent’ stems from Robert Newton’s portrayal of Long John Silver in the 1950 film version of Treasure Island. Largely following the same plotlines as its literary source, this production tells the tale of the crew of the Hispaniola on their journey to find the supposed treasure of notorious pirate, Captain Flint. A number of changes are made to the script, most of which are entirely sensible. Dr. Livesy (Rebecca Todd) is made female, as the doctor charged with keeping Jim safe throughout the journey, while characters such as the aptly named shaggy and excitable Black Dog are given much larger roles. Initial scenes suggest the plot to be much darker, more complex and very close to the original source material than one might first expect, given this is ultimately a production for kids. Soon enough, however, the drama mellows and characters cede some of their initial menace. Dafydd Gwyn Howells does an admirable job as the charming, idiosyncratic and (perhaps a little oddly) increasingly camp Long John Silver. Similarly, Dominic Garfield’s frantic Black Dog positively speeds around the stage, perhaps striking a little better balance between kids-cantered pseudo-pantomime and a legitimate sense of threat.

There is certainly melodrama a plenty in Treasure Island, which by-and-large keeps the audience engaged throughout. The promenade aspect of the production also adds a great sense of progression to the production, making the most of the, at-times, decent British summer weather. On arriving, guests are informed that they are either a ‘privateer’ or a ‘pirate’ (the latter instructed to sport a stylish red bandana), then follow that group from scene to scene—from England to a remarkably inventive pirate ship in the Church’s garden and onto the island itself. While adding dynamism and allowing greater creativity through some impressive sets, this aspect is, unfortunately, also the show’s main weakness. Both privateers and pirates are split during the show to follow either the side of the pirates or the otherwise ‘good guys’, each being invited to watch a different scene at the same time as another scene. While perhaps a good idea in theory, this, in practice, means that one only really sees half of what the production has to offer, having later to piece together some of the artificial plot-holes this approach creates. In addition, the resulting shuffling from scene to scene (although made more pleasant by some enthusiastic ukulele playing) nevertheless also leads to some awkward gaps and a lengthy running time, particularly for young children. Indeed, many of the scenes also feel a little unnecessary, perhaps allowing another group to finish their scene before moving on to the next. For example, one scene involving the search for the treasure on the island ultimately doesn’t lead anywhere and feels very stretched out. If refined somewhat, the promenade feature could certainly be improved upon to cement the positive additions it makes and limit these ultimate pitfalls.

In sum, Treasure Island is an enjoyable romp that kids and adults alike will certainly get a lot out of. The performances are characterful and colourful, though at times slip into melodrama and pantomime that might limit their appeal to older audiences. The sets are elaborate and impressive and the promenade aspect of the production adds an interesting flavour to the show, even if that flavour is soured somewhat at times due to some clunky moments. Nevertheless, Treasure Island is a great excursion for the whole family and sure to satisfy both young and old. In all, well worth your pieces of eight.