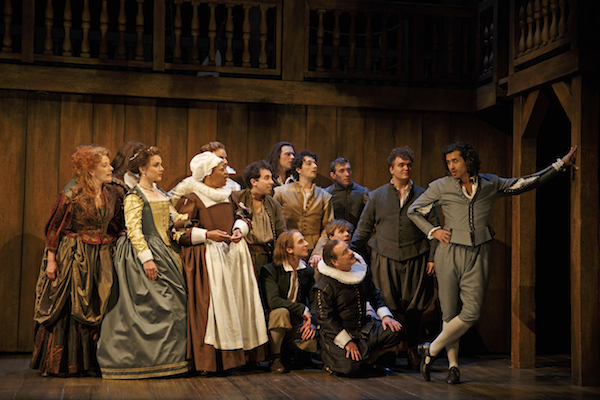 In Stratford: Shakespeare in Love

I have just one rule about adaptations and that one rule makes or breaks my assessment of said adaptation’s worth, every time. I need there to be a reason it’s been adapted. In adapting Victor Hugo’s novel into the Schönberg & Boublil musical, Les Miserables gains the group-think momentum of a rousing war anthem and the haunting ache of repeated motifs, among many other things. As unnecessary an adaptation as it was, those tasked with creating the Legally Blonde musical used their new medium (theatre) to give the story something it didn’t have in its previous medium (film), borrowing from classical theatre tradition to turn the film’s sorority sisters into a narrating “Greek Chorus”. A TV adaptation of a film allows for world expansion and long-form storytelling that couldn’t be achieved in only two hours. A film adaptation of a play brings the audience in closer to the action than even the most intimate of stagings could allow. Adaptation opens existing texts up, focuses them through a new lens and finds something new in them. I firmly believe Shakespeare in Love had no business being adapted.

One of the key elements of the Oscar-winning 1998 film is that it is art of one medium commenting on art of another. It’s about the theatre, it needn’t be presented in one. The intimacy of the film is completely gone in the stage adaptation- a live audience having never once improved a sex scene. Viola and Will’s first kiss (and their second, and almost every other) is played for laughs and the extra time that needs to be filled to stretch the story from feature film to two-act play is made up entirely of hijinks (who doesn’t love a trapdoor gag?!) and a lot more material for the one-joke character of young John Webster.

The only great character to benefit from the transition is Kit Marlowe who, played with absorbing charm by Saamer Usmani, is expanded from his amusing but incidental film role to become a Mercutio-like confidante to Will and (to more mixed effect) a sort of Cyrano in the composition of Sonnet 18. Another highlight character, Brad Hodder’s bluster as megalomaniacal leading actor Ned is excellent but the character’s heart is buried a bit too far beneath the amusing surface. Queen Elizabeth’s role is transplanted almost word-for-word from the film and thus retains its effect (played with wonderful dry wit by Sarah Orenstein) though the lovely Shannon Taylor and Luke Humphrey are robbed of all of Viola and Will’s best material, which relies on the unspoken and the acutely observed (two things next to impossible to project to the cheap seats).

Designer Nick Ormerod’s costumes are beautiful and his set is appropriately versatile but all of it amounts to a pretty solid “who cares”. I’m not against adaptations full stop (again, I liked the Legally Blonde musical, of all things) but we absolutely cannot be making them just to make them; or, more accurately, to make money off an established brand. We should only be making adaptations of stories that are unlocked by being told in a new medium. Shakespeare in Love is most definitely still best seen on film.