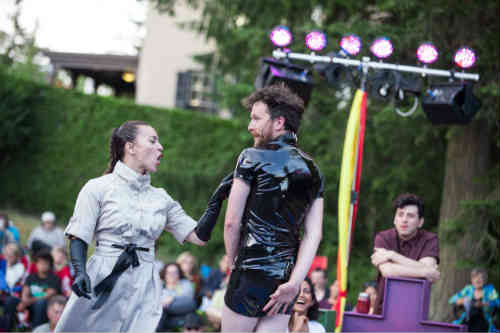 Taming on the Bard’s Bus Tour

For Shakespeare fans feeling like other interests of theirs are being underserved in the theatre, the Driftwood Theatre Group is offering audience members across Ontario the rare chance to enjoy some light S&M along with their Bard, and in the glorious outdoors. Director D. Jeremy Smith and dramaturge Myekah Payne’s adaptation of Shakespeare’s controversial play is a zippy but ambitious production which places the story of the play in a beguilingly specific context: 1989 Toronto (some lines have been altered to make references to GTA geography), during Pride Week. The outdoor stage, around which audience members can set their fold-up chairs and blankets, is flanked by four floodlights festooned with pride-coloured ribbons, and the aesthetic, as well as musical backing, is defiantly 80s-centric. This extends to the casts’ a cappella renditions of period hits like “She Drives Me Crazy”, “Love is a Battlefield”, and, uh, “Fight the Power”. We also get a glimpse of some period-specific TTC subways, which sent me into a brief Proustian reverie.

All of this in service of dealing with the much-debated text, which originally depicts the taming of the titular “shrew” Katherine (Siobhan Richardson), an independent and unapologetically aggressive woman whose father Baptista (a mother in this production, played by Renée Hackett) has decreed that his younger daughter Bianca (Tahirih Vejdani) cannot marry until her elder sister has herself found a spouse. Enter Petruchio (Geoffrey Armour), a loud out-of-towner who volunteers to marry Katherine, and who then essentially gaslights her into submission, at which point she happily exhorts the pleasures of wifely deference.

The cast is strong, and unflaggingly energetic, which is what is most required of actors in a midsummer outdoor production. As Katherine, Richardson is confident and appropriately assured. Perhaps in keeping with Smith’s concept, her Katherine seems less untameable than simply strong-minded, and if the production were set in Shakespeare’s day, it might offer a refreshing read of a character described as violent and uncontrollable because she isn’t some wilting flower. Her attitude might seem less stereotypically “shrewish” than simply very firm. In 1989 Toronto, the strong reactions her behaviour produces seem a little less plausible, but then again it’s no secret that, even twenty-seven years later, a confident woman can cause confusion.

The characterization does serve to make her growing affection for Petruchio less the result of a psychological breakdown and shift in character than a growing recognition of a kindred soul. Again, this is not quite as evident in execution as it is in description, but it offers an alternative read to the frustrating psychological abuse that Katherine endures in Shakespeare’s text. As Petruchio, Armour is amusingly puckish, adding a confident shade of femininity to his sexually progressive characterization, and the two have an endearing chemistry. As the secondary lovers, Fiona Sauder (playing the usually male role of Lucentio) and Vejdani are appealing counterpoints to the brasher pair. Usually, their romance can seem like a dull distraction given too many scenes, but the added gender fluid element and the sensitivity of both performances make their dynamic a quiet highlight of the production.

Everyone in the cast gets a moment to show off, and are almost always constantly in play: when they’re not onstage they’re either running around the space rapidly changing costumes (just about every actor doubles for another character) or moving props between scenes while pulling off some complex a cappella work.

So while the queer angle feels less specifically applied than the program suggests, this is still a lovely and open-hearted production that does an admirable job of wrestling with the warped patriarchal glee of Shakespeare’s play. Staging it in the outdoors even allows one of Petruchio’s most maddening games to seem a little less manipulative: Katherine sees the sun, Petruchio claims it’s the moon, but on a clear evening, when the sun does indeed give way to the moon, isn’t everyone right?

As apart of “The Bard’s Bus Tour”, The Taming of the Shrew is being performed in parks around the province (check Driftwood’s site for schedule and locations).