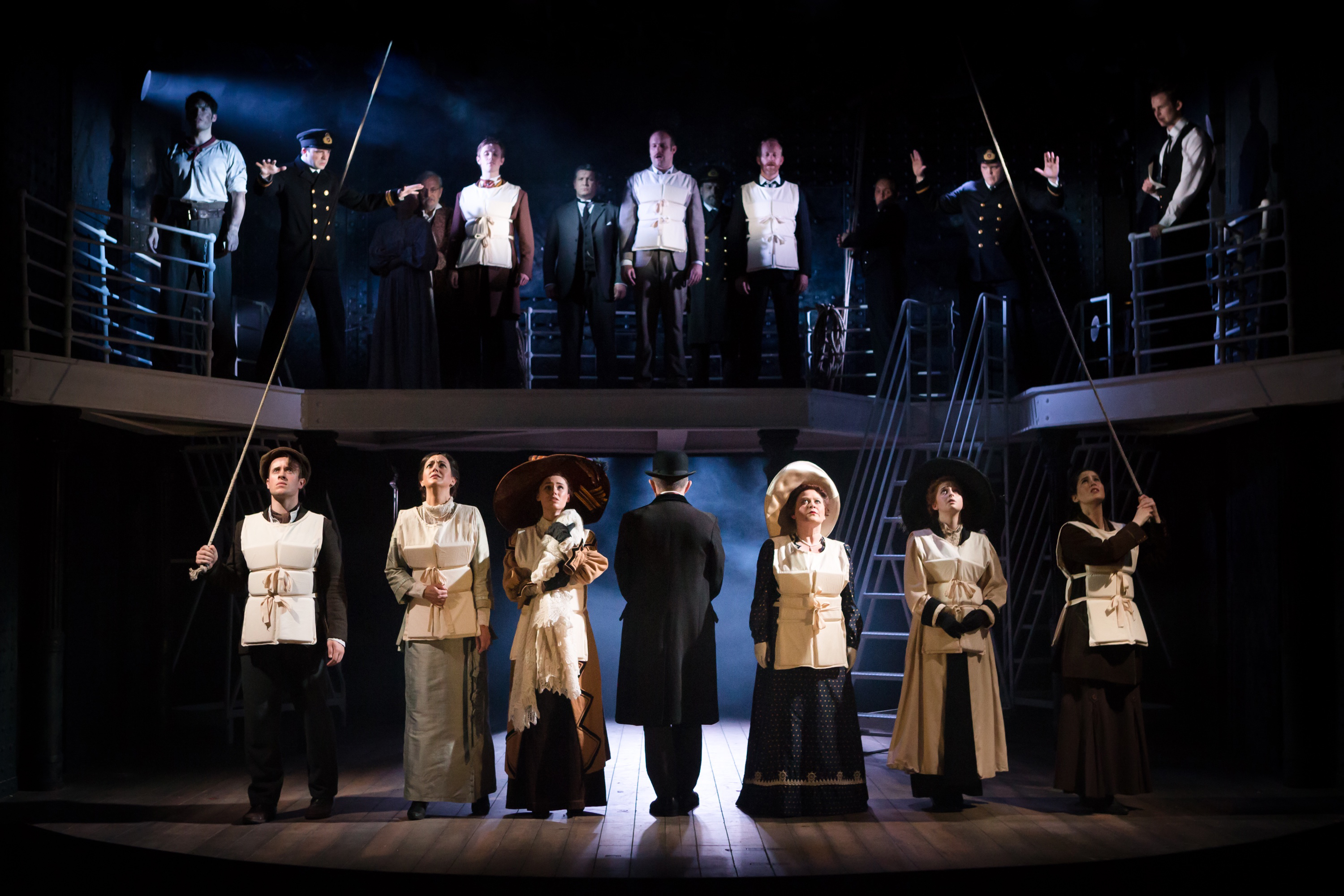 Titanic at the Charing Cross Theatre

Before starting my review I think it is important to mention that this is a musical I already know very well and indeed am incredibly fond of. While this means I was already entering the theatre with the confidence that I would at least appreciate Peter Stone and Maury Yeston’s book and music, it also made my expectations of Thom Southerland’s revival incredibly high and anything other than near perfection would have been a crushing disappointment—I loved this production! From the very start where we witness the ship departing the docks and hear the wonderfully uplifting piece ‘Godspeed Titanic’ blaring through the auditorium sung impeccably by a surprisingly small cast, the show is absolutely breath-taking.

Contrary to sceptical comments I have heard in the past, Titanic has no distasteful jazz hands while a chorus line sings about a sinking ship, nor do Leo and Kate rock up to paint naked pictures or shout about being the king of the world. Stone’s story is based on the real events of the tragedy in 1912, surrounding the lives of real people who boarded the famous ship, many of whom lost their lives. The music and script handle this tragic story admirably, exploring love, loss, fear and hope.

The show is an ensemble piece with a whole multitude of characters sharing the limelight evenly. In the first act, character development is prioritised as the show leads up to the inevitable disaster. Stark differences in wealth are shown as we move amongst the different classes and we learn of the conflicts and relationships of passengers and crew alike. While there are slower sections in this act there are also some incredibly touching moments; the unlikely friendship between Niall Sheehy’s Barret and Matthew Crowe’s Bride is a well-crafted relationship, particularly during ‘The Proposal/The Night Was Alive’ which both sing majestically. ‘Lady’s Maid‘, an uplifting song of the hopes for a new life is also a noticeable highlight and one of many, where the perfect ensemble vocals will leave you with goosebumps. It is a credit to the cast that they manage to portray characters you can both relate to and empathise with, despite the limited stage time each is given. The act ends with the truly haunting ‘No Moon‘, dramatically climaxing in the collision with the iceberg.

The mood unsurprisingly changes from hope and aspiration to fear, panic and eventually unbearable sadness in the second act as we experience the hours between the ship’s crash and its eventual fate. Despite the quality of the first act, it is in the second where Southerland proves his worth as one of the most exciting and talented musical theatre directors around. The way he manages to make the drama so emotional and gripping without being overwrought is no easy task but yet one that he appears to do effortlessly. He manages to naturally paint the fast escalation to tragedy without allowing his audience a second to stop for breath. ‘To the Lifeboats’ pulls on every heartstring available and will leave the coldest of people without dry eyes. Late in the act, ‘Still’ sang by Dudley Rogers and Judith Street who play the elderly Mr and Mrs Straus, is filled with warmth and love despite the underlying horrors of the event.

All of the cast genuinely seem invested in this show and what happened to the people they are playing and this really shines through in their performances. It almost feels a shame to single out only a few performances as all deserve plaudits, but James Grant in particular, playing first class steward Etches, should receive high praise for his personal take and natural approach to an otherwise unmemorable character. Victoria Serra, as confident Irish passenger Kate McGowen, is a joy to watch, instantly likable despite her unabashed demeanour.

The Charing Cross Theatre is significantly smaller than this Tony Award winning musical’s original home on Broadway and the cast is cut by about a third. It is true that the show would benefit from a more elaborate, grander set design and a fuller chorus; however, these limitations are handled incredibly well with doubling up of parts managed effortlessly and the simplistic two levelled set used creatively to maximise the space. The costumes are elegant and well-constructed helping boost the majesty of the piece.

I can’t speak more highly of this production. It has warmth, joy, sadness, drama and heart, and is one of the best musicals you could currently see.