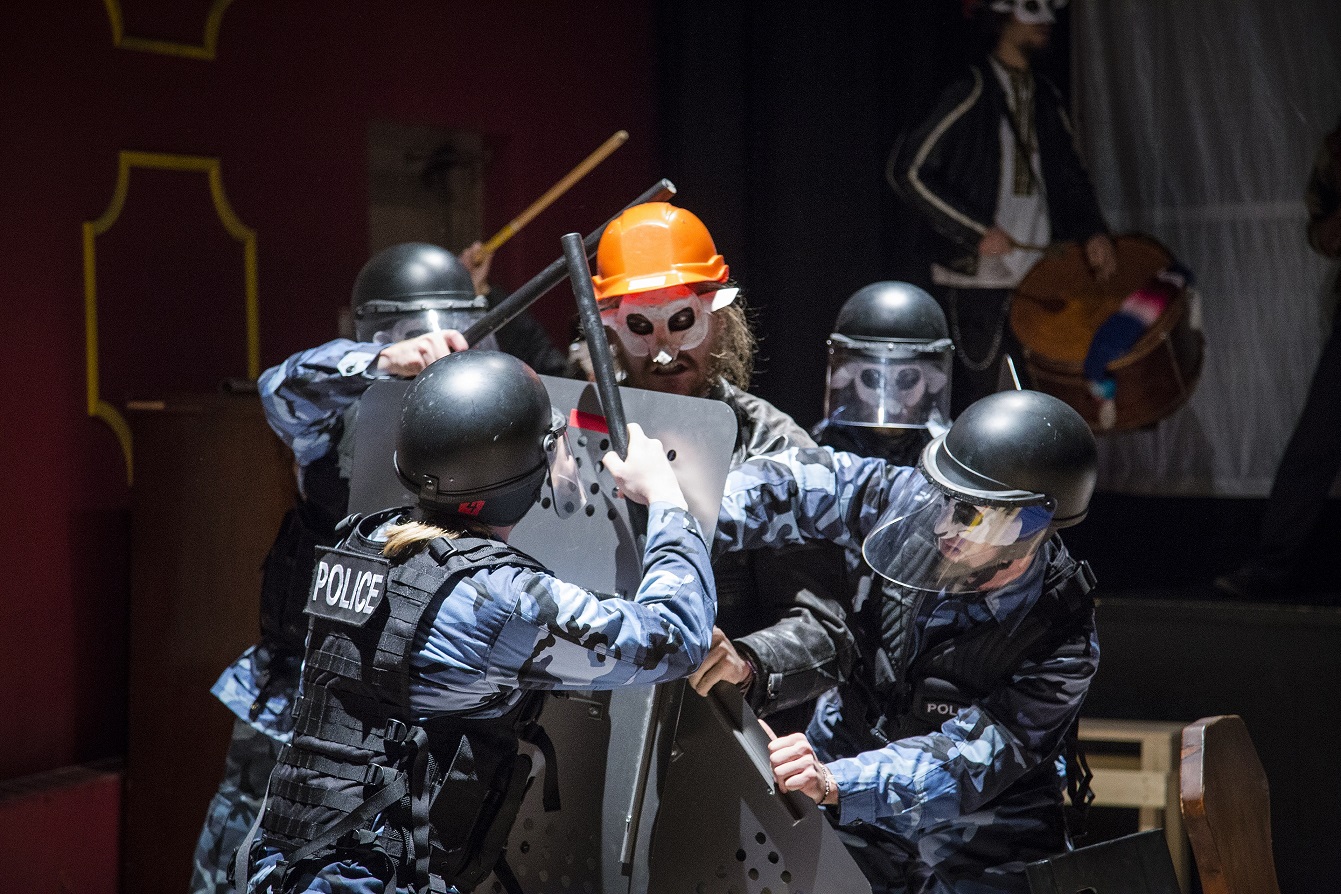 We enter the performance hall at Broadview Place with an air of excitement and expectation. The space is set up with a large community table in the centre of the room that also serves as a stage, the seats at the table fill in quickly and the rest of us find a place on the benches flanking the long sides of the table. Already there is a sense that this is more a community gathering than a performance.

The windows seem to have been hastily covered with cardboard and there are pro-revolution slogans on the walls. We are surrounded by reminders that spaces like the one we are gathered in often serve as safe havens in times of political unrest. There is a large screen at the front of the room and a large wooden Christmas tree reminiscent of the one that stood in Kiev’s Independence Square at the back.

The action starts off feeling upbeat, the top of the show offers background information on the 2014 Euromaidan protests through projections of newsreel clips on the big screen. Food is passed around—a borscht with buttered bread—while the Lemon Bucket Orkestra plays and the wooden Christmas tree is covered in protest flags and posters. Cast members pick people out of the audience to dance with and soon the space is filled with spinning and laughing actors, both those there to share their story and those that came to watch.

It is this invitation to join the action that establishes the immersive nature of the performance, one that will soon have us encouraged to flee our seats for safety, build barricades and hurl bricks at riot police. The show progressed at a hectic pace, many things happening at once, whether it be dancing and mingling while enjoying a heartier second course of perogies, or urgently being encouraged to take shelter. It was challenging to take in all that was happening, but I found myself immediately immersed in my own contribution to the revolutionary cause with a sense of responsibility to those around me.

The action unfolds to a backdrop of traditional polyphonic (many sounds produced simultaneously) songs that were emotionally impactful and took on an otherworldly quality in the performance hall. The creators, Mark and Marichka Marczyk, envisioned this Guerrilla-Folk-Opera while on the frontlines of the Revolution of Dignity, and their use of traditional music to animate their personal account of the Euromaidan uprising surely deserves a place in Ukraine’s folk canon.

The earlier festive feel of Counting Sheep gave way first to the heightened emotions of frontline protest action and than to the sombre bleakness of a revolution turning to war.  The entire cast wore sheep masks for the duration of the show, obscuring their identities while reinforcing the idea that everyone is a hero/no one is a hero in this people’s (folk) uprising. The earlier lighthearted dancing was replaced by vignettes of violence, the community hall replaced by a bunker, and the social gathering turned to a sense of group solidarity. Counting Sheep is an immersive experience that envelops you in a landscape of community and protest action while compelling you to contribute.