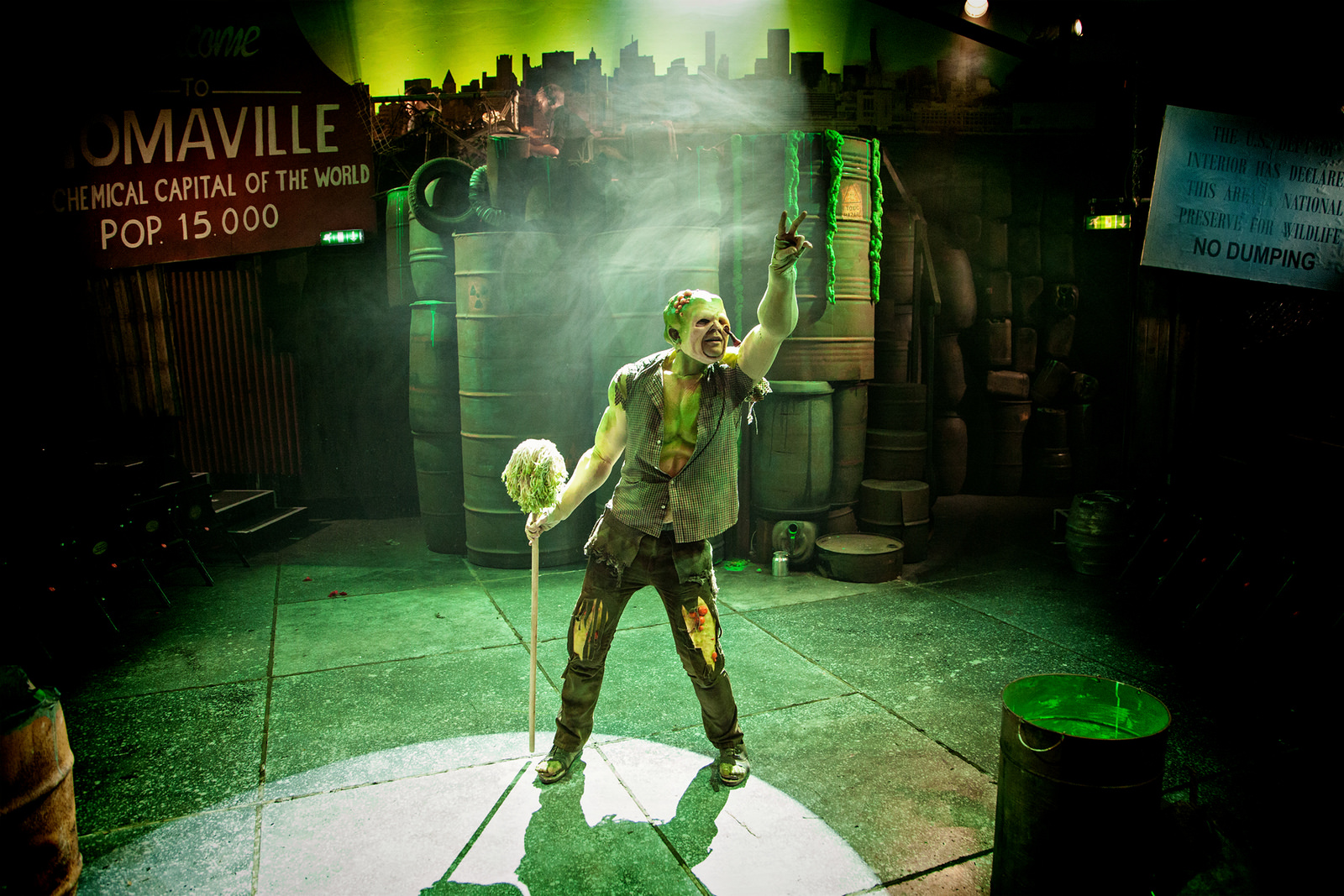 The Toxic Avenger at the Southwark Playhouse

An intelligent and knowing comedy musical that remains totally aware of itself throughout, not shying away from its farcical nature but rather embracing it. This show is fun but polished and a joy to watch.

The title itself, The Toxic Avenger, provides a pretty clear indication of the tone of the musical before you are even welcomed into the theatre by ushers in protective overalls. It takes a generic monster story (borrowed from a 1980s cult movie), throws in some soft rock tunes, litters the narrative with tongue-in-cheek humour, and just goes with it. The plot follows the life of Melvin, a sweet, geeky male living in Tromaville, New Jersey, a town that has been over-polluted with toxic waste under the orders of its evil Mayor. After an encounter with said Mayor, Melvin gets thrown into a can of toxic waste but rather than meeting his fate, emerges as a super strong, crime fighting mutant—no, really! All that remains is to throw in a blind love interest, a judgemental mother and a good guy turned bad turned good again storyline, and you have the premise. Similarities can be made with acclaimed comedy musicals such as Little Shop of Horrors or Urinetown, and The Toxic Avenger genuinely holds its own among these classics.

The crucial point that makes this show work so well is that it doesn’t rely on its admittedly weak plot. There is no attempt to delve deep into these one-dimensional characters but rather the writers choose to keep things firmly on the surface. This allows the show to concentrate on what it is clearly aiming to do: play around with its characters, poke fun at generic plot points, and mix silly lyrics with incredibly listenable music in order to create smart comedy. The show does take a little time to warm up as it introduces the setting and protagonists, but after about 20 minutes you feel comfortable with what is happening on stage and the mood becomes more fluid and relaxed. With a paper-thin plot, there is the fear that the jokes will soon run dry; however, the show never felt repetitive or slow but rather just kept going with an endless string of good quality humour.

A lot of praise needs to go to director Benji Sperring, as in lesser hands this musical could really sink, but with his keen eye for detail and clear understanding of the parody genre, the outcome is a slick and smart operation. Occasionally, lines don’t quite land as one might hope but these moments are few and far between in an otherwise very carefully constructed production. The show is incredibly fast-paced and intense, and Sperring successfully maximises the strengths of his small cast, allowing them to demonstrate their unquestionable abilities as performers.

Mark Anderson, as Melvin, delivers his ballads effortlessly and with a beautiful tone. His riffing and blissful falsetto display him as a West End star in waiting, while he is also able to carry the bizarre narrative through his characterisation, avoiding the temptation to slip into simplistic stupidity. Hannah Glover does a fine job as Sarah, coming across as quirky and cute, though at times her character becomes a bit muddled and some of her cruder lines don’t work particularly well. Nothing can be taken away from her vocal ability though: she has ounces of talent and shows this off during ‘Hot Toxic Love’ and ‘My Big French Boyfriend’.

It is when Ashley Samuels and Marc Pickering are on stage, however, that the production is at its best. The pair are billed simply as Black Dude and White Dude respectively, and take on the roles of “everyone else” in the musical, switching between genders, nationalities and ages, often with very quick costume changes (that do not go unreferenced). They are both fantastic character actors whose expressions and movement do enough to leave you rolling with laughter before even opening their mouths. Highlights include ‘The Legend of the Toxic Avenger’ where Pickering plays a country singer and ‘Evil is Hot’ where Samuels is seduced by Lizzii Hills’ Mayor. Hills herself gives a belting performance, particularly in her Act 1 closing song which has to be seen to be appreciated.

It is becoming increasingly common for the Southwark Playhouse to take a risk in welcoming a relatively unknown musical onto its stage and, again, that risk has paid off with The Toxic Avenger. This is a proper romp of a show that refuses to slow down, throwing joke after joke at its audience and demonstrating B-movie-esque musical theatre at its absolute best.