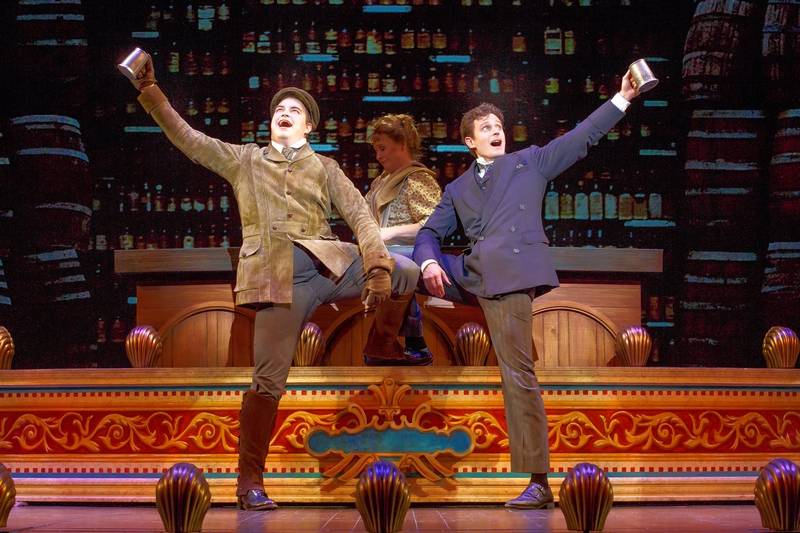 On Tour: A Gentleman’s Guide to Love & Murder

A top-notch cast saves the day in the matter of the National Tour of 2014’s mysterious “Best Musical” Tony winner, currently being presented by Mirvish at the Princess of Wales theatre. There isn’t a weak link in the bunch as they trill and swoon and mug and scheme their way through Robert L. Freedman (book and lyrics) and Steven Lutvak (music and lyrics)’s farce of questionable consequence.

Director Darko Tresnjak’s stage-upon-the-stage conceit lends key self-awareness to the musical’s vaudevillian broadness and Linda Cho’s costumes are scene-stealers, even when they’re thrown on in one of the production’s many (many many) lighting-fast quickchanges (all the kudos to star dresser Nadine Hettel). The musical seems to be constructed almost as a test for the production team. Numerous elaborate set pieces? Check. Constant location changes with very short transitions? Check. One actor playing nine different roles each requiring a hyper-specific costume that clearly defines each character but is also simple enough to transition that he can reappear completely transformed after only a line or two offstage? All The Checks. It’s all terribly complex, unless you’re talking about the musical construction, the thematic storytelling, or the character arcs.

Luckily, an empty, silly musical can always be elevated (at least a little) by the right performers. Led by the sweet-voiced, winking narrator Kevin Massey and role-hopping powerhouse John Rapson, the National Tour cast makes a molehill into, if not a mountain, at least something slightly bigger than a molehill. Kristen Beth Williams and Adrienne Eller delight as contrasting female stereotypes, thoughtfully pulling Sibella and Phoebe away from their caricatured extremes without rejecting the show’s chosen heightened style. Only Rapson is allowed a moment or two of simple, unaffected heart (though he’s also called upon for the most ridiculous of cross-dressed nonsense), beautifully delivering the production’s one sincere song as the kind Lord Asquith D’Ysquith Sr. The assignment here is mostly silly but the cast dutifully leans in, setting their strong voices to a simplistic score and embracing the nonsense in search of some fun.

Personally, I didn’t have much fun. I found the text too tiresome to be truly funny, no matter how great the cast or superhuman the quickchange team. But I’m a grumpy bugger; I’ll freely admit that. Gentleman’s Guide requires fairly low expectations and a quickness to forgive (a lame pratfall here, a dumb gay joke there) but all it really wants in the world is for you to crack a smile so maybe that’s not the worst thing.