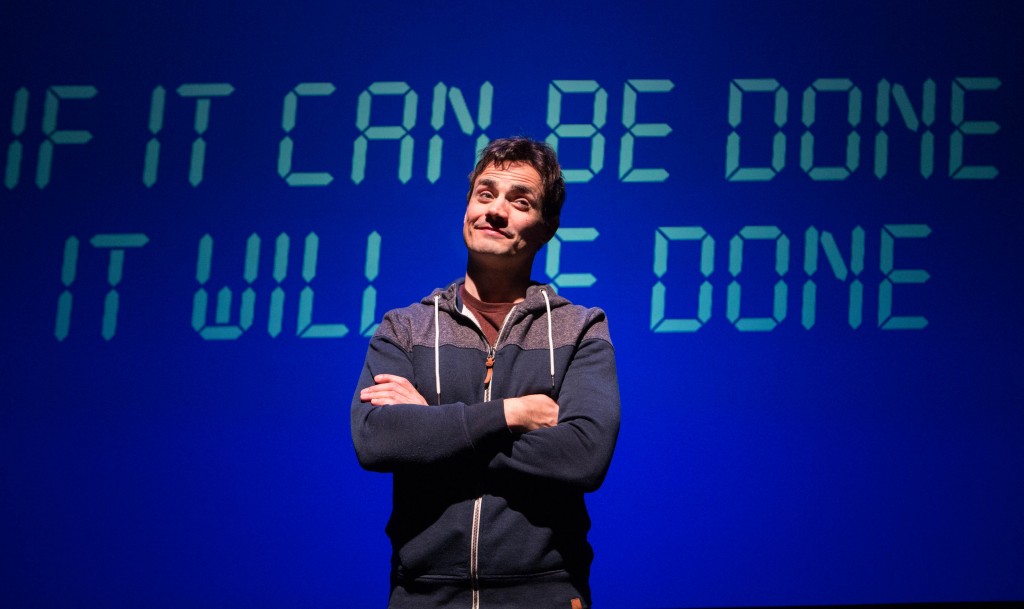 Kahn (playwright Fabrizio Filippo), a tech genius, has died and his friends and colleagues, both intimate and estranged, are summoned to an unremarkable airport hotel for the reading of the will. Once they are there, Kahn continues to manipulate the strings from beyond the grave. There are baffling levels of bureaucracy, and a man named Quentin (Tony Nappo) paces around, destroying cell phones, communicating with his higher ups via walkie-talkie, and constantly spritzing air freshener, to the consternation of the rest of the characters.

Filippo has written an interesting cluster of characters, each quirky and interesting in their own way, coupled with a number of hilarious and awkward conflicts. Gary (John Bourgeois), an older businessman and right hand to Kahn, vacillates between indignant frustration and existential meltdowns. Isla (Rachel Cairns), a young flight attendant, pretends not to understand half of his cultural references, sending Gary further into his angst spiral. Annie (Maggie Huculak) and Laura (Kelli Fox) meet and in the tension between them we immediately sense that there is some sort of significant history. The dialogue of the show is also layered and witty, constantly portraying the relationships in quick, clever moments. “We’re not going to be the kind of women who only talk about their children, are we?” asks Annie, sending Laura nervously backtracking.

There are some clever design elements, like when Aldous ‘manipulates’ the technology, resulting in the house lights flashing on and off, a very effective low-tech way of representing a high-tech idea. When Kahn’s voice comes over the speakers, the accompanying images on the screen mimic a screen saver and provide a hypnotic visual to augment the scene. The screen is also used to offer settings (‘Run Down Airport Hotel’) and punctuate the scenes with hilarious product names (“He never could name anything to save his life”). The device could be used more as a way to provide better visuals and/or cognitive dissonance for the various scenes but, as is, its Windows95-blue functions to remind us of the nostalgia of bygone technology.

As entertaining and clever as the play is, there is something about it that feels a bit shallow. Annie is the only character with real emotional depth. Both Laura and Gary are very funny, but we never find out much about Laura, and Gary, for all his existential angst, seems a bit too effusive and emotional for someone meant to be so successful in the tech business world. At the end of the play, Aldous is convinced of something very quickly in a pertinent exchange, and we never really understand why. Quentin’s secret is revealed at the end but there is literally no denouement for his storyline. For all of the clever set up, the main conflict of the play is underdeveloped and quickly glossed over.

Finally, at the close, Filippo turns to the audience with a final quip: “How far will technology take us from ourselves?” This seems to be the thesis of the play, sure, but a little too on-the-nose for my taste. It isn’t a sign of a fully mature script if the play has to tell you what it’s about.