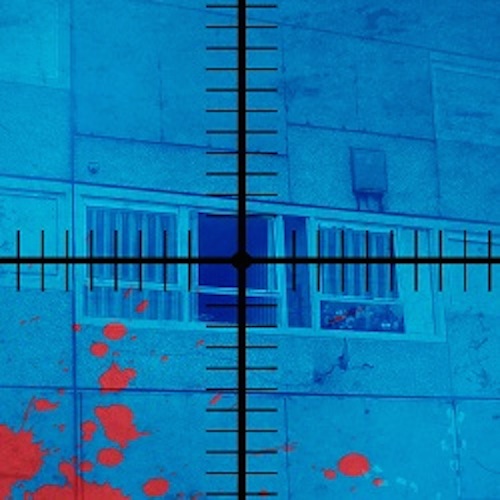 The Skullcap Collective’s Blue on Blue

It starts weak and ends strong. For a play about a physically-disabled protagonist, it pays to have the action centre on how he cares for others rather than himself. Despite a heap of flaws, Chips Hardy’s decade-old play achieves something resembling poignant, even if it takes an hour to get there. Wheelchair-bound veteran Moss (Darren Swift) co-habits an apartment with nervy nephew Carver (Daniel Gentely). When Moss reveals his new carer, Marta (Ida Bonnast), their relationship is strained to the point of breakdown.

At times, Hardy’s language yields impressive naturalism with its vernacular and bluntness. It does stoop on occasion, though, to poor humour and unfitting poeticism; the opening is particularly acrid with its overloud swearing. Once a character’s secret is revealed, however, after two distinct tonal shifts, it all becomes rather tender. Since this reveal is plot-heavy, I can only say that it is unexpected and highly desirable. When Blue on Blue appears as though it is delving into poorly-paced sitcom territory (not unlike the current The End of Longing), the heavy flip from weak comedy to sombre, hopeful drama is great—if only the play were to begin as it ends.

When not dealing with his character’s prosaic racism, Swift’s portrayal of Moss is highly affable. Although he too frequently fumbles lines, his frank blokiness goes over well with Hardy’s attempt at naturalism. Conversely, Gentely is unconvincing for most of the play as Carver’s frenzied persona, although is movingly lowly when toning it down for the final scene. Bonnast is easily the most consistent performer: her plucky and ebullient Marta lifts the sagging first half from disrepair to neutral drama. Production-side, there is sleek blocking on director Harry Burton’s part, though he often fails to tease out the rough rhythms of Hardy’s dialogue, leaving awkwardness where tension could exist. The set changes are overlong too, there being much on stage with not enough time to move it.

Blue on Blue is patchy but it resonates in unexpected ways. It highlights why a confident tone is important, because when the right tone is struck the actors finally get their chance at offering assimilable experience.