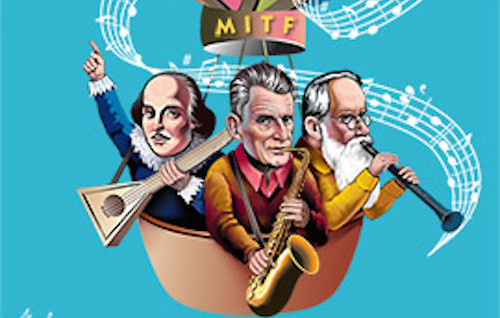 Part of the mission statement for the Seventeenth Annual Midtown International Theatre Festival is to “offer a safe environment to develop innovative theatre.” Held at the WorkShop Theater’s Main Stage and Jewel Box Theaters, the festival featured over thirty performances. The productions are typically about a half hour, and many even shorter than that, which provides ample opportunity to see several shows.

In the first moments of The Grade, written by Seth Freeman, directed by Mike Keller, and staring Joel Repman, Cherie Mendez, Colin Fisher, and Katie Repman, we are told this is going to be a play all about sex. But at only 25 minutes, it was too short, too rushed, and when all was said and done, I was left unsatisfied. This is not to say the length of a play always matters. I’ve had great experiences with plays of all sizes, and I certainly enjoyed parts of it (I rarely say no to theater), but just as the play was beginning to capture my attention and getting into a nice rhythm, the lights came on and I realized that it was already over.

In The Grade, an orthodontist (Fisher) has a one-night stand with a woman (Mendez) who gives his lovemaking a mediocre grade, devastating his confidence. Joel Repman plays the orthodontist’s best friend who is also the woman’s therapist. The premise is clever and the acting is strong all around, but the scenes are rushed, jumping ahead in time and location, and the result is that the play’s resolution, as well as the characters’ emotional struggles, feel unearned. Although the premise is a one-night stand, by the second date the leads are conversing like a couple deeply in love and struggling through a relationship crisis. It seems the play’s ultimate flaw is its rush to achieve climax without taking the time to warm up the audience. Perhaps I’m old fashioned, but this is a play in need of more foreplay.

Word Play, written by Ran Xia and directed by Florence Le Bas, tells the story of Icarus’ (Adrian Burke) last dying days: his memory is waning and he has invited his girlfriend Esme (Charlotte Arnoux) on a final road trip. As his memories fade, she recounts the moments of their love and loss. The play was inspired by a Buzzfeed post (23 Charming Illustrations Of Untranslatable Words From Other Languages), which later became a book, Lost In Translation, by Ella Frances Sanders. The play uses 11 of these words, and each of the play’s scenes is purportedly based on one of these 11 untranslatable foreign words. The program given to the audience before the show provides a list of these eleven words with an approximate English translation. For example, the German word, Torschlusspanik, is described as “gate-closing panic,” and the word Cafuné is a Brazilian Portuguese word meaning, “the act of tenderly running one’s fingers through someone’s hair.”

The show consists of many vignettes, some a few minutes long, and some only a few seconds. The set is scattered with crumpled up paper as well as paper airplanes, and in the background, those eleven untranslatable words hang on a long string. The play struggles to find its identity, as it balances being a homage to the Buzzfeed post and being an independent show. At first, the play feels beholden to the Buzzfeed post, as the first few scenes explicitly act out the untranslatable words hanging in the back of the set (I found myself squinting in the dark at the program to see which word was being incorporated into the scene). However, as the play progressed, the Buzzfeed post and the untranslatable words seemed entirely irrelevant. The actors never discuss the words hanging behind them (if the audience doesn’t read the words’ “translations” ahead of time, they’re not going to know what any of them mean), and some of the later scenes do not seem to incorporate the untranslatable words at all. As a result, the looming hanging words end up being more confusing than anything else.

Despite its flaws, the show is certainly worth watching for the creative writing and particularly for the versatile acting of Charlotte Arnoux. Ms. Xia’s writing is strong but the story between Icarus and Esme would have been stronger without the inspirational Buzzfeed gimmick.

Godhead is an enjoyable dark comedy by Richard Curtis, directed by Paul Navarra and starring Laura Fay Lewis and Mike Roche. It uniquely explores what happens to art once it leaves the hands of the artist. Madeline (Lewis), a painter who is passionate, frenetic and prone to emotional outbursts, sold her favorite painting to the nebbish and unsophisticated Martin (Roche). When Madeline discovers that her masterpiece has ended up in the hands of an unworthy and unappreciative amateur collector, she suffers the ultimate seller’s remorse and wants it back.

The play spans the moment Madeline walks into Martin’s apartment until she leaves a half hour later. Although Madeline is artistically more sophisticated, she is sanctimonious and at first her approach of insulting Martin seems a poor strategy for regaining ownership of her painting. She questions everything from Martin’s interpretation of the painting to his choice in placement and hanging height. Martin is likeable as the everyman who, at first, just wants to enjoy a painting without having to deal with the heft of deeper symbolism. But his desire to better himself and his artistic understanding is honorable, if not a bit convenient for the premise of the play.

The strength of this show is its overwhelmingly smart dialogue. Martin and Madeline spar and trade words (she is much better equipped), but he comes off better. And he has all the leverage since returning the painting to Madeline is ultimately his decision. The direction, however, is somewhat uneven as it sways from serious and profound to cartoonish and slapstick. And it ends a bit too cleanly with everyone emotionally richer and happier after a 30-minute conversation. But the show is saved by clever retorts between the characters and the humor derived from the stark contrast between them.