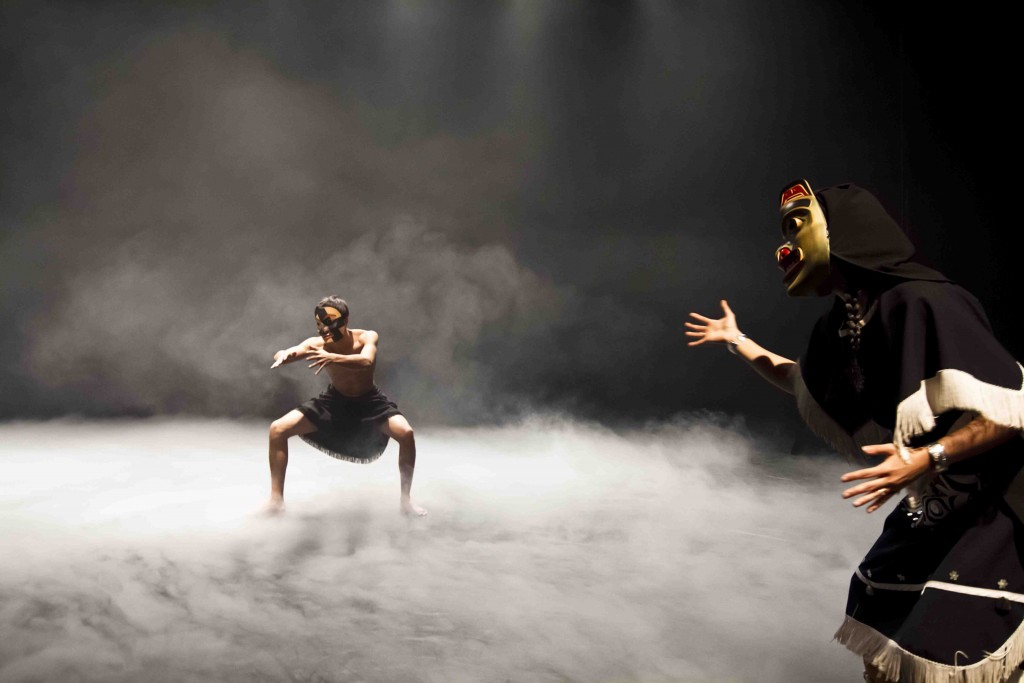 Luu hlotitxw: Spirit Transformingby Dancers of Damelahamin and Lara Kramer’s NGS (Native Girl Syndrome) was a provocative pairing for the Native Earth Performing Arts and Danceworks Coworks partnership. This was a double bill steeped in contrasts, the calm rhythmic repetition of Luu Hlotitxw seemed a world away from the chaotic frenzy of NGS,while iconographic images of West Coastal culture in the first half of the evening appeared incongruous with the gritty urban despair presented in the latter. Although at odds in presentation, the strength of this double bill was the disharmony revealed in watching them back­to­back. As the program cover offers: “Two transformations. Two dramatically different outcomes”.

Luu hlotitxw: Spirit Transforming is a tale of personal journey. A young man reaches back to connect with his ancestors while receiving their support to move into his future. Created in the style of the traditional dances of the West coast Gitxsan, the show is rooted in cultural tradition. Repetition in movement, percussion and song kept a rhythmic pace throughout the show, while animation and traditional mask work became aesthetic focal points. The opening scene evokes the majestic orca whale as the dancers undulate through the space with painted fins on their backs, this becomes interspersed with eye­level footage projected on the back scrim of multiple orcas swimming in the ocean. The imagery of ocean and orca may have been overly prescriptive, the visual was jarringly literal while the rest of the work was more allegorical. The projector was put to greater effect later with two interactive scenes created by Knock Knock Animation. The dancers perform both in front of a projected animation, but also slip behind the screen and enter into the animation, a clever way of articulating the liminal spaces inherent to transformation. In this different space the dancers appear as silhouettes and shadows, evoking the relationship between the young man and the ancestors in an endearing way.

The performance culminates with the young man receiving a button adorned blanket from the three women ancestors that have been accompanying him on his journey. The program notes that the Gitxsan are known for their button blanket regalia. Nigel Grenier in the role of the young man is physically tasked with conveying the weight of the moment to the audience as he repetitively performs an athletically challenging piece, emphasising the perseverance required in his personal journey. As his solo culminates the other three dancers/ancestors step forward, singing, and addressing the audience for the first time. This final connection to the audience seems poignant, as the lack of this connection throughout the piece created an emotional distance from the performance that worked against the personal story of transformation that the work was building towards.

It is worth noting that among the stronger aspects of the piece was the connection between Nigel Grenier as the young man and dancer/choreographer Margaret Grenier as an ancestor. Margaret Grenier’s grounded performance provided a depth to her character that resonated through the theatre space.

We are invited into the theatre as Lara Kramer’s NGS (Native Girl Syndrome) begins, the sounds of a loud busy freeway or racetrack fills the space, two women are stage right, backs to the audience. Cardboard boxes and black garbage bags are strewn around the edges of the performance space. Each women is hunched over a cart (one is a baby carriage) containing the scraps of their lives.

Both women are inebriated. Their dissociation is palpable and it is uncomfortable to witness.

The following 60 minutes passes in a drunk haze as the audience is witness to the debasement and degradation of the two women. Their physicality shifts between the halting movements of one who has lost physical cognition to evocative interpretations of raving, sex and everyday survival. There is much to be uncomfortable with in this piece, and the exacting and unwavering performances given by Karina Iraola and Angie Cheng is unapologetic, they offer no breath of escape for the duration of the show. The scenes drag out, everything seems to last an uncomfortably long time, the audience is completely saturated in discomfort as the women enact the mundaneness of addiction and isolation.

The use of symbolism is pointed, a yellow plastic crucifix lashed to the side of a cart, a copy of “The Story of Canada” being dragged around, a novelty Canadian flag left open on the stage. Kramer’s inspiration is her own grandmother’s experience moving to an urban environment from a remote First Nations community. The work explores themes of street culture, dissociation and alienation, thematically matched to Luu hlotitxw’s transformative narrative, but a dark and destructive transformation that is the antithesis of Luu hlotitxw’s hopeful conclusion.

NGS reaches a climactic note when Cheng finds an old microphone. She begins speaking then yelling at an unknown assailant, though her words also serve as a destructive and learned self narrative as she screams gendered and racialized slurs over and over. This scene culminates with Cheng stumbling across the stage enraged, her face contorted, her movements more animal than human. This is the first time we see her face, or the face of either women. For the majority of the show both women perform with their long dark hair falling over their faces, a curtain of anonymity. These are two anonymous women in front of us on the stage, their alienation highlighted by the lack of identity that is afforded them by an audience that can not recognize or identify them.

The stage lights fade to black and the audience waits uncomfortably, people begin to wonder out loud if they should applaud, two glowing exit signs cast a red light across the stage. Someone begins to clap as the house lights come up, the two women bow, their long dark hair covering their faces.