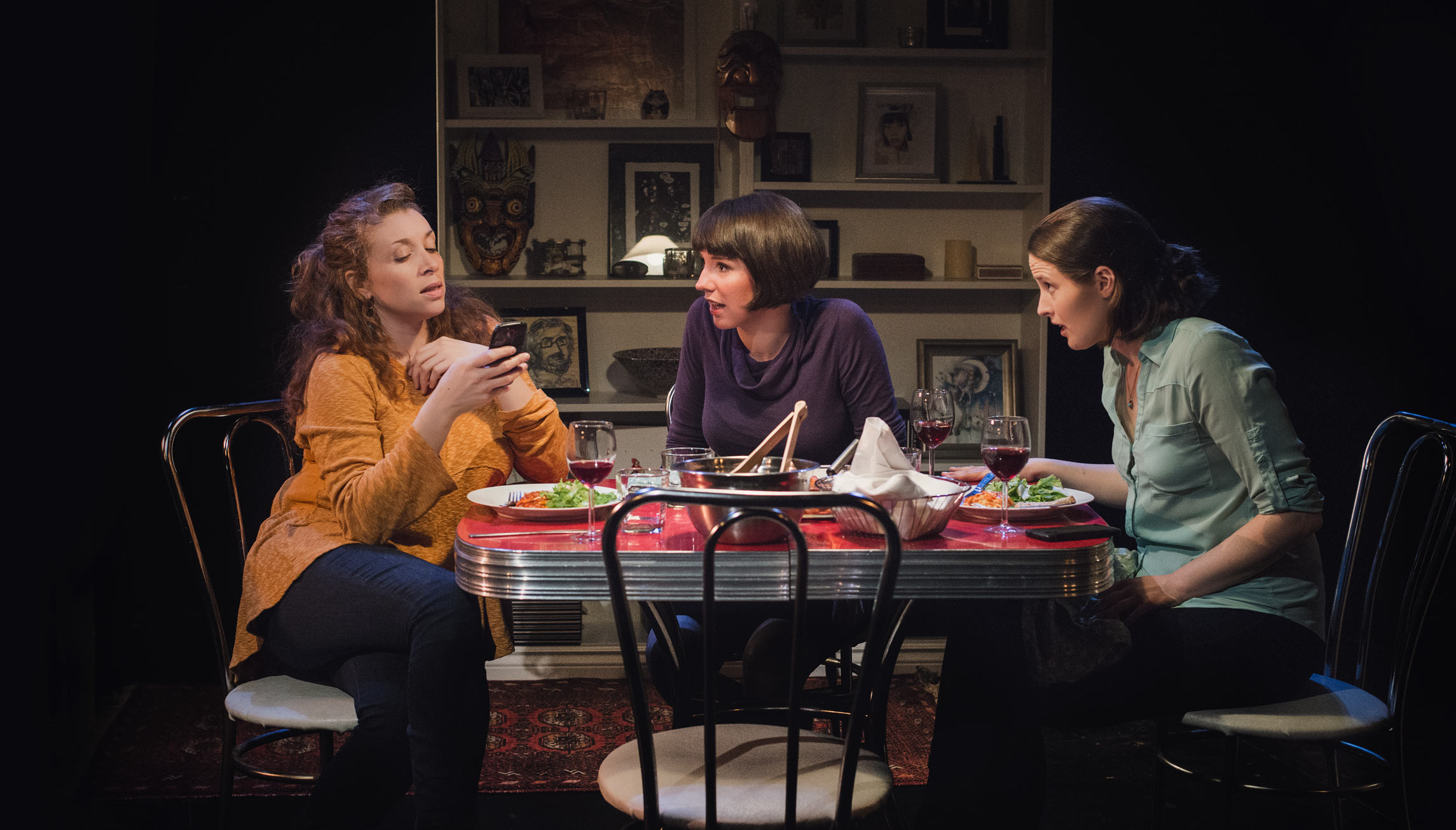 We Three is a collaborative new work by Sarah Illiatovitch-Goldman with a clever title inspired by the Henry V speech a character passes off as “a poem she wrote”; a speech about brotherhood forged in shared experience and unshakeable as years pass. If only the bonds between modern women were as simple as those between Shakespeare’s soldiers, the heartbreaking harsh reality faced by this titular trio wouldn’t be so infuriatingly relatable.

Trim some of the more redundant politics from the dinner table scene (surely we could get by with a shorter “Blurred Lines” recitation) and cut the play off a few beats earlier for a more painful and ambiguous ending and We Three might be a near-perfect real-time encapsulation of modern liberal Canadian young womanhood (a hyper-specific demo, but an engaged one to be sure).

The play zooms in tightly on a trio of best friends who share all the macro markers of hive mind liberal agreement to reveal the pressures, judgements and philosophical fissures that divide even the most like-minded of individuals from the most similar of backgrounds. Two and a half years removed from their idyllic time as university roommates, Jamie (Sarah Naomi Campbell) and Skye (Hallie Burt) have remained in their same home, pursuing intellectual ideals and passion projects while Blaire (Suzette McCanny) has moved to Calgary, taken a corporate job, married a reportedly uninspiring man and gotten a boob job. When Blaire stops in for a mid-business-trip dinner, that last point takes much of the heat but it’s really the whole package that irks Skye and, especially, Jamie as they assess their apparently happy friend and have a hard time seeing her as the same girl they once held so close.

At times, the play threatens to be swallowed by its full-throated op-ed qualities, retreadings of arguments so familiar that Skye’s insistence that they go one night without bringing up Jian Ghomeshi works almost like a meta-commentary on the fact that all these conversations (Ghomeshi, Thicke, rape culture, the hateful misogyny of Entourage) have become an inescapable everyday facet of modern womanhood. The artists are preaching to the choir on the broader stroke arguments and the minefield complexities of the less black and white issues are somewhat undermined by the varied quality of the performances. Campbell is the strongest voice in the room as the most liberal voice in the room, balancing Jamie’s warmth and vulnerability with a principled self-righteousness that insightfully threatens to undermine her empathy. Burt sits in the middle, delivering a nicely layered performance as sensible scholar Skye with infectious doses of fun that (for reasons that can only be made clear by seeing the play) broke my heart into a thousand pieces. The most frustrating thing about We Three is that its only weak performance comes from the character who arguably needed the strongest performance. McCanny shrieks and preens her way through the play’s lone set of counterarguments, diminishing the strength of Blaire’s point of view as a well-drawn, complex centrist who maybe might have voted for Harper but is no less worthy a human being because of it.

It’s a shame that the imbalance of a weak Blaire and a particularly strong Jamie makes the play seem more agenda-pushy than I think was intended because the actual political, social and cultural opinions being expressed are ultimately so much less important than the characters who are coming together to learn, through the expression of said opinions, how far apart they’ve grown. The surface level politics may feel predictable but the underlying story about identity, ideology and the limits of adult friendship is truly something special.

We Three has just been extended until April 23rd. Get your tickets HERE.