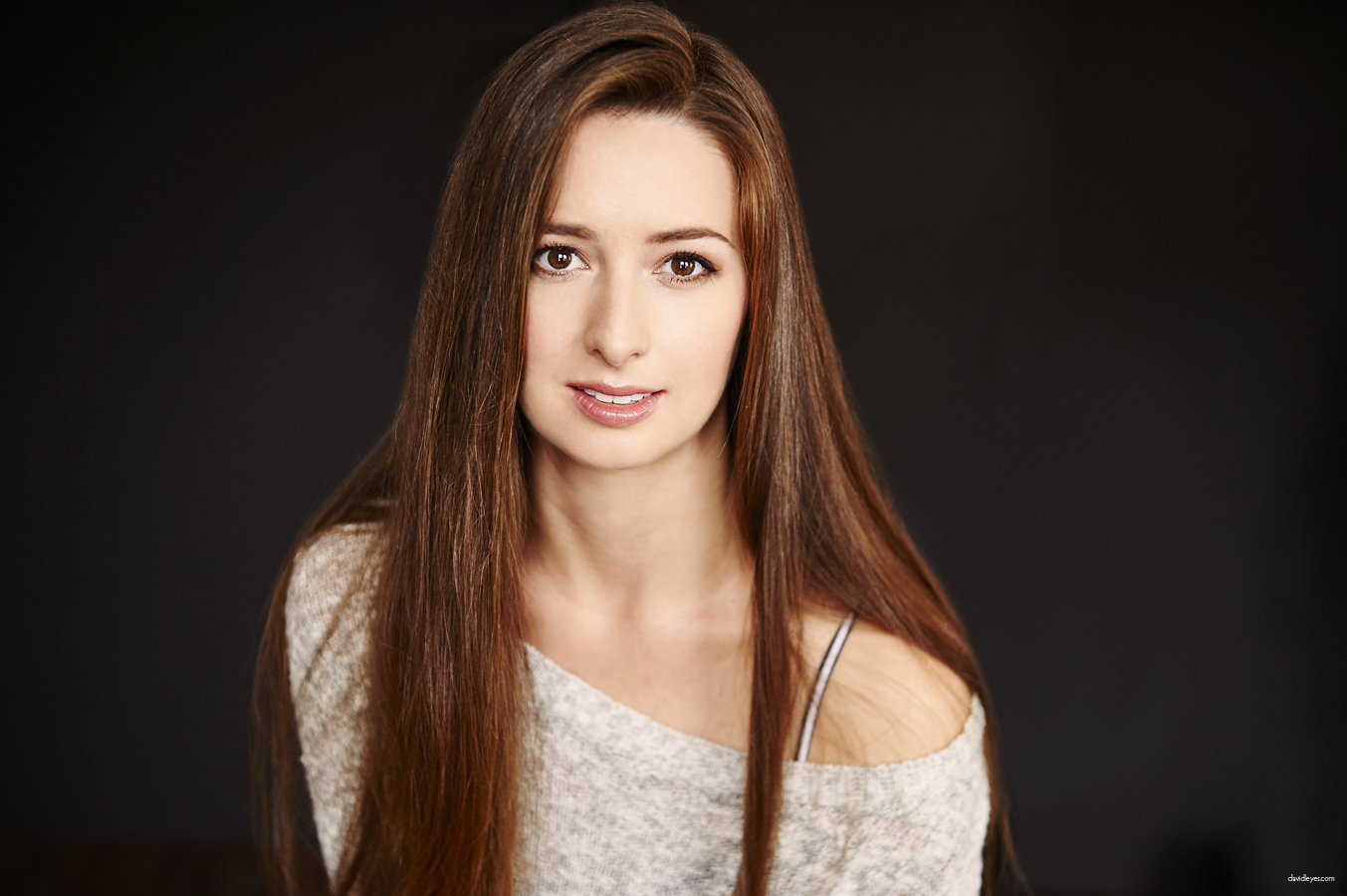 One of Toronto’s brightest up-and-coming ingenues, the delightful Peyton LeBarr brought her stellar classical training to the Toronto Fringe last summer to join Ale House Theatre as one of very few new actors in their Twelfe Night remount.

Funny, smart, sad and sincere, the only thing not to love about Peyton’s Outstanding Actress-nominated performance as Viola was her wig (okay, just one more jab at the wig then I promise to drop it forever).

Can you remember the first theatre production you ever saw?
I do. It was a school production of Jumanji. I was supposed to be in it. I was playing one of the spiders, but right before I went onstage I couldn’t find my spider mask and so I had to watch the show from the back of the auditorium. My mother took pictures of a different child in a spider costume thinking it was me.

How did you develop as an actor?
Very slowly. I spent most of my teenage years doing terribly embarrassing youth theatre, mostly musicals, but when it came to choosing a career, I wasn’t sure if jazz hands were my true calling . One year I got lucky with a drama teacher who opened my eyes to some more alternative ways of storytelling, and by the time I was reading Caryl Churchill I was sold. I got a BFA in acting at the University of Windsor followed by an MFA in acting in England at East 15 Acting School. Something I realized near the end of my training was that no degree was ever going to prepare me enough to be an actor, and that I’ve learned just as much about acting through travel, being immersed in other cultures, and also just growing up and experiencing life. So I guess you could say I’m still in develop[ment].

What’s your favourite role you’ve ever played?
Oh gosh I couldn’t pick just one. For an average looking girl-next-door white chick, I’ve played a lot of strange and unassuming characters. Really, my resume is all over the map. But if I have to, I guess the first time I was ever trusted with a meaty role was Constance from Goodnight Desdemona, Good Morning Juliet. That was the first time I felt what it meant to let loose and enjoy the ride of a show.

Do you have a dream part you’d like to play one day?
I’ve got a few bucket listers, but I’ve also got a strange feeling that my “dream part” may end up being something that hasn’t been written yet.

You have a lot of experience with Shakespeare. What is it that keeps bringing you back to the bard? Do you approach his texts differently than you might a contemporary playwright?
I actually spent many of my years in training under the impression that I needed to love Shakespeare when really, I was secretly more fascinated with more alternative playwrights. I wanted to tell stories beyond that of the young lover, the power driven ball buster, or my personal favourite, the witch. I later realized while studying and working abroad that it wasn’t Shakespeare I disliked, it was the way I was taught to approach it that held me back. The first lesson I learned while working at Shakespeare’s Globe was that we know nothing for certain, we just have a lot of good guesses. As far as the text goes, Shakespeare broke rules left right and centre, and his actors had very little time to even memorize their lines let alone do scansion for every soliloquy. I certainly can’t ignore the years I spent studying which words to stress and how to respect the verse. This training is the base on which I stand. But at the heart of it, text analysis is only useful if you can apply it in an active way. It may take a few extra steps to find the clues in the script of a Shakespearean play, but this is also the case for any play written in a different era other than my own, or a play that was originally written in a different language, or by someone who has had vastly different life experiences. At the end of the day, the end goal is still the same, figure out the story and find the best way to share it [with] the audience.

How did you get involved with Ale House Theatre?
I had sent a video submission to an earlier Ale House Theatre production audition notice. In hindsight, it was pretty humiliating. It involved singing and playing the ukulele, an instrument I can barely play. When Joshua [Stodart, artistic director] contacted me months later it was a huge shock. Now it’s a nice reminder that you never know what’s around the corner.

You were one of only a few new cast members coming in for a remount of an existing production. What are some of the biggest challenges that go along with that?
Well it was certainly overwhelming to walk into a rehearsal room with everyone not only offbook, but having already established a lot of the blocking! I was literally one step behind everyone else for the first few weeks. But I really can’t complain, the cast was so incredibly supportive and the whole Ale House team was so generous.

Viola is considered one of the greatest female roles in Shakespeare’s canon. What were some of the key qualities you zeroed in on for your interpretation of the character?
I think the biggest challenge for anyone playing a famous role is to remove everyone else’s vision of that character from your head. Although, one thing I did notice about Viola’s story was how incredibly tragic it is compared to the rest of the plot. Most of the humour comes from pranks and drunken foolery and it often pokes fun at superficialities. Meanwhile Viola, while humorous in her own sense, brings a slightly deeper level to the play with the loss of her brother, the pain of unrequited love, and her determination to stay afloat. With that in mind, I was very careful with my choices so that people could empathize with Viola’s story in order to get some kind of catharsis at the end.

How did director Joshua Stodart’s ideas about the role mesh with your own?
Josh is such an incredible director that I honestly couldn’t tell you. If I ever combated with his image of Viola, he never let me see it. The great thing about Josh is that his direction style is very encouraging. He’s outrageously present in the rehearsal space, so everything you do feels like it was created as a collaboration.

Tell us about working with fellow nominee Hilary McCormack as Olivia.
Hilary is the perfect combination of being incredibly smart and having a willingness to play. I immediately trusted her in rehearsals and I always felt a great sense of teamwork whenever we found ourselves in a challenge. I’d do it again in a heartbeat.

How did the traditional “original practices” approach the production took influence your performance?
The most influential part of the original practices for me, which Joshua continually encouraged, was maintaining a direct and continued involvement with the audience, especially during soliloquies. It’s easy to forget we’re just talking to people when speaking such a poetic language, so its a good way to stay humble.

How does one deliver a serious performance while wearing a terrible wig?
With an irrationally persistent belief that I looked as fabulous as Julia Roberts as Tinker Bell in the movie Hook.

Did you have a favourite moment in the production?
That’s a tough one for me. I really enjoyed the ring speech, mainly because the audience was always so involved which meant it felt so different from show to show based on the people in the room. I also really enjoyed being in the larger scenes when I wasn’t the focus because I got to watch the show. And of course, there was the one performance when my pants ripped in the back and I gave the audience a little more than they paid for. It wasn’t until then I realized just how often servants had to bow in Shakespeare plays.

What are you up to now/next?
I’ve got a couple of different projects up my sleeve at the moment but they’re all in their early stages. I’ve written a short play that was showcased at Theatre Pass Muraille’s Crapshoot which is still in development. I’m also a core member of Spiel Players Theatre Company, and have a show with them that is soon to be be announced.

Do you have anything you’d like to add?
A huge thanks to MyTheatre Awards not only for the nomination, but the much appreciated support to the indie arts community.