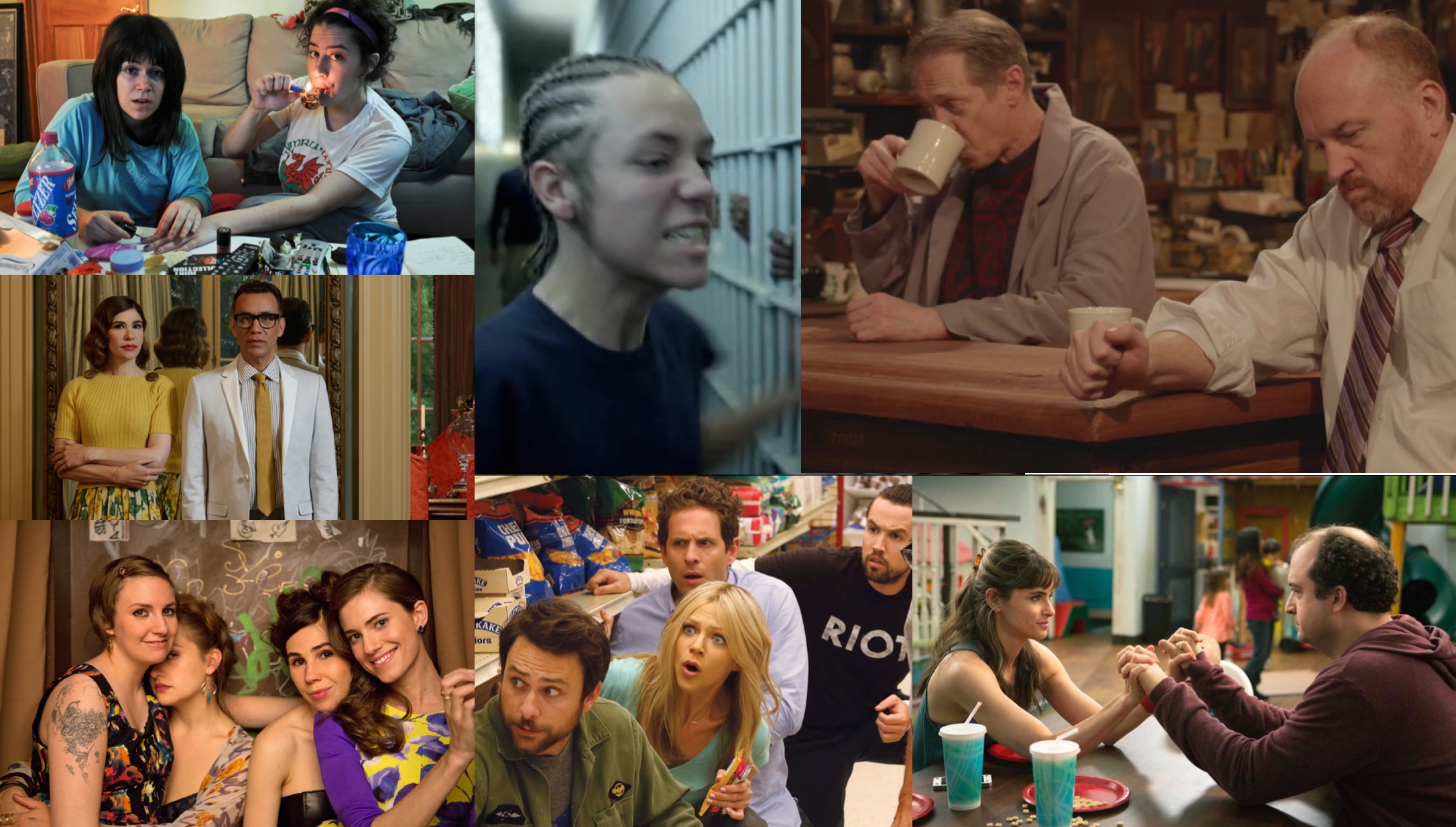 The first few months of the new year are the best. The temperature drops below -40°, the ice makes dog walking nearly impossible, and the best holiday is again almost a full year away, but it’s all good because it’s the Best TV Season. For 13 or so weeks in the dead of winter, my favourite show comes back to Showtime, HBO reinstates mumblecore Sundays (at least for now), broken terrible people run amok in New York and Philadelphia, two best friends named Carrie and Fred reunite to keep Portland weird and, this year, Louis CK is making these great months some of the most memorable ever.

I couldn’t love Showtime’s brutal, hilarious and heartfelt ensemble dramedy Shameless more. This has been well documented at this point but the current excellent season is even further renewing my faith (which had, to be honest, waned a bit during the mediocre fifth season). The best cast on TV is best known for including William H Macy but what the Emmys desperately need to realize is that Frank is as much the lead of Shameless as Cymbeline is of Cymbeline (meaning not at all). He’s more accurately the third or fourth main character and generously the seventh or eighth most interesting. Macy’s performance is serviceable- consistently charming/gross with just the right lack of vanity- but its his kids who run this show and always has been. Emmy Rossum continues her remarkable tour de force as Fiona struggles to keep it together and the incomparable Jeremy Allen White’s genius Lip will always anchor the show as one of the best characters in modern television (with more to come from him as his genetics finally start to haunt him). Cameron Monaghan’s Ian is finally starting to find his feet again after two rough seasons, starting a new career path and a new out-of-character relationship after closing the book on tragic lover Mickey in a season premiere scene that might be my favourite scene of the series. After highlighting season five with Debbie’s sexual awakening, Emma Kenney’s been saddled with a pregnancy storyline that isn’t my favourite but the beauty of Shameless is that the bench is incredibly deep so a lackluster Debbie story means nothing when Kev has his best arc of the series thus far (an only-on-Shameless absurd and absurdly haunting story involving paraplegia and Molotov cocktails gone wrong), V connects with a young refugee and, most importantly, season one’s nine-year-old (really 11) Ethan Cutkosky gets his big breakout season as he joins the ranks of the grownup characters (Carl’s faux cancer storyline in season three was fantastic but it was really more about Frank). Coming out of juvie to kick off the season, Carl is all put-on swagger and dangerous cultural appropriation (leading to both a series-highlight dramatic speech from V and a series-highlight comedic device when his slang got too extreme to be understood without subtitles), swirling darker and deeper until a brutal realization scares him into legitimacy just a little too late for a clean break. I know if the show played all year I would never get a chance to miss my beloved Gallaghers but there’s yet to be a year since Shameless premiered when I didn’t wish TV’s Best Season lasted longer than 13 weeks.

Programmed opposite Shameless, HBO uses this time of year for what I call their mumblecore block, an identity that felt much more unified last year when Sundays on HBO also included the tragically cancelled gem Looking. The pairing of Lena Dunham’s Girls and The Duplass Brothers’ Togetherness is one of my favourite hours of programming offered by any channel (RIP, the days when FOX Tuesdays had New Girl and The Mindy Project together). I was severely skeptical about Girls in its maximum zeitgeist days but in the past two or three seasons it’s really found its groove and has finally stopped trying to prove anything to anyone. Modern Girls is searing, complicated and really fucking funny. Its understanding of its characters is so finely tuned that a lot of the jokes come almost more from a “Of Course she just said that” place than the overused “I can’t believe she just said that!”. Once you tune into the idea that Girls doesn’t approve of Hannah any more than you do, her occasional glimmers of humanity are extraordinarily effective. Jessa’s growth has been as fascinating to watch as Marnie’s regression and Adam Driver’s skyrocketing star has done nothing to hinder the dedicated authenticity he has always brought to Adam. Meanwhile, The Duplass Brothers continue to solidify their position as Hollywood’s foremost creators of low-fi, personal, genre-unidentifiable true human stories. Togetherness might be their definitive project- a slow-moving, introspective investigation of modern adult misery, its sources and its beautiful reprieves. I always laugh, I usually cry and I never ever miss it. HBO, however, disagrees. They’ve cancelled Togetherness before season three, which means there are only two weeks left when it will be a part of the wonderful winter season.

As much as the early months of the year bring us deep, complex character portraits, they also bring us some of the most inspiringly ambitious and uniquely absurd comedies on the market. Comedy Central’s Broad City, FXX’s It’s Always Sunny in Philadelphia and IFC’s Portlandia are all consistently hilarious but it’s their sheer creativity that most impresses. Last year, Always Sunny did an episode called “Charlie Work” about preparing for a health inspection shot in the style of Birdman as though it were all one long take. Just finished season eleven(!), it’s still one of the freshest shows around with one of the most cohesive ensembles ever (except Frank, Frank still sucks). Broad City is well-measured, character-grounded insanity week after week without ever letting up and I’d have to do more comprehensive consideration to declare this definitively but it’s very possible Broad City generates more laughs from me every episode than any other show on average. Portlandia I’m just incredibly attached to. I love its weirdness, its world building, its continuity and the fascinating, unique, unshakeable friendship that is both its heart and its driving force.

And then there’s Horace & Pete, a unexpected, unanticipated, unprecedented piece of work unlike anything else. An on-the-somewhat-cheap webseries written and directed by Louis CK and shot then released on a schedule so tight an episode might include a reference to news from two days before it reaches the audience, Horace & Pete looks kind of like mid-century live television, shot like theatre in approximately real time on a handful of large sets. The first episode of Horace & Pete could literally be a stage play, comprised of two half hour acts of unbroken action set in a single place. The writing is absurdly beautiful, honest but verbose, funny and unapologetic and intelligent. The characters are deeply drawn and performed by a miracle of a cast (Alan Alda as Uncle Pete is one of the greatest creations in any medium in recent memory), the perspectives so varied and insightful it’s baffling that it could all come from a single creator with a single perspective of his own. But it’s the form that’s most interesting. There isn’t one, really. An episode might be an hour or it might be 20 minutes. It might be a series of scenes in various places leading to a climax like a “normal” episode of television or it might, like the genius third episode, be a two hander shot almost entirely in closeup where guest star Laurie Metcalf speaks for 24 minutes straight. Horace & Pete has an internal logic and characters grounded in very personal realities but it’s independently distributed and comes from a multi-hyphenate with the connections and power to literally make anything he wants without answering to anyone but himself. The result is the kind of unfiltered, unrestrained but also unadorned creation that could only ever come from this one man in his specific circumstances at this one time in creative and technological history (the show is distributed through and thus funded by CK’s website). It’s somehow appropriate that Horace & Pete is happening now, not just at this time in creative and technological history, but at this more specific time- the Best TV Season.