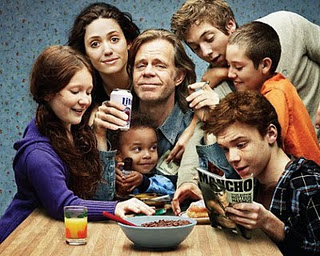 In January I read a pretty harsh review of Showtime’s new “comedy”* Shameless, calling it crass, preachy, pretentious and easy. Of all the features of a series I might hate, those are probably the four I have the hardest time getting over. But then I heard the series’ praises sung by a couple friends with excellent TV taste, so I reluctantly put it on my list- somewhere before things like True Blood, which are notably not up my alley, but after surething favourites like Shameless‘ writerly neighbour in programming, Episodes. When I finally got round to it, it took me 2 days to get through the pilot. And about 16 hours to get through the entire rest of the first season. Once I got to know these characters I loved them like people I’d been watching for 6 seasons already and I absolutely had to know what would happen to them next.

I have a friend who hates Aaron Sorkin. He complains that no one talks like a Sorkin character and demands what he thinks is realism in dialogue. I think it’s less realism than it is a lack of witty characters, but that’s an argument for a different day. My point is that the writing in Shameless walks that superb line of something he would like while never surrendering the wit, camaraderie and whip-smart feeling that most of his favourites lack. It’s some of the sharpest writing I’ve heard in years- hilarious and thoughtful but also colloquial and character-specific. Slowing Lip’s dialogue down would be as unhelpful as speeding Fiona’s up, they speak as they think- slowing him down makes him less realistic as who he is. The stories are engaging, well-paced and stirring but its really the characters that make Shameless fly.

The brilliantly-crafted family of distinct but intrinsically linked characters (adapted from the British series of the same name) is led, not by William H Macy’s poster-featured drunk patriarch, but by his frazzled, harsh and martyrous daughter Fiona (played with remarkable sympathy by Emmy Rossum). From her subtle accent to her skeletal form to her sunken and tired eyes, Rossum embodies Fiona’s down-trodden life perfectly. She’s frustrating and impossible and heroic all in one, a too-tough, infinitely fragile caretaker who’s forgotten how to be anything else. It’s a truly exceptional performance.

My other favourites are Jeremy Allen White and Cameron Monaghan as her younger brothers Lip and Ian (Emma Kenney and Ethan Cutkosky round out the speaking portion of the Gallagher family as the promisingly-played but as-yet-outshined younger siblings Debbie and Carl).

I love a good contradictory character and Jeremy Allen White’s hooligan genius Lip (short for Phillip) fits the bill perfectly. He’s just plain fantastic- from his older-brother protective instincts to his horn-dog antics to his dedication to his scholastically fueled entrepreneurial efforts, Lip quickly became my favourite Gallagher. The development of his relationship with Karen proves so much more interesting than I anticipated the first time we met her. They never put a label on it, never stop sleeping with other people; from day one Lip and Karen call each other “friends”, but are never platonic, either way, no one is anybody’s “boyfriend”. But Lip treats her like a girlfriend. Not like Steve treats Fiona, always trying to impress her, rather, Lip treats Karen with the reverence of a best friend, (that’s what he calls her), wanting more to make her happy than to make her like him. And he desperately clings to that, because he knows he’ll lose her if he tries to make her his girlfriend. As it is, he has a best friend and has sex with the girl he likes- the best possible combination. So when she tries to put a stop to it, he desperately pleads “I don’t love you, I swear” even though every fiber of White’s performance screams “of course I love you, you idiot!”. The moment is horrible to watch, in the very best way. From Lip’s fantastic witticisms to his most heartbreaking (and wonderfully ineloquent) moments, White is a standout performer I’ll be looking out for for years to come and Lip is truly a character for the best-of lists.

But as good as White is, his strongest moments always come alongside Monaghan’s Ian. One of the show’s greatest achievements is the chemistry between the siblings (the hardest dynamic for actors to develop), never more evident than in the torturously excellent relationship between the two eldest Gallagher boys. The moment I knew I would love this series came in the pilot episode when Lip confronts his younger brother about being gay. There was something about the way both brothers reacted to the conversation that gave me hope for the characters and the series- it wasn’t over-dramatised or idealized, not really bad or really good or even played for many laughs, it was just honest. From there, Ian quickly becomes the central figure of some of the show’s strongest stories. In a refreshing take, Ian isn’t tortured by his sexuality or bullied (not that that many people know at this point in the series). Rather, the drama of his sexuality comes from the same place it does for Fiona- his relationships. He’s conflicted about his relationship with Kash (the complicatedly charming Pej Vahdat) not because Kash is a man, but because he’s an older, married man, and Ian’s boss. He’s conflicted about his relationship with Mickey because he knows he’s falling fast for someone who wholeheartedly doesn’t deserve him (the darkly funny but heartbreaking motif of “you kiss me and I’ll tear your face off”-like comments is particularly excellent). An ROTC candidate, Ian is also tough as nails, though the quietest of his siblings, and perhaps the most mature (despite his questionable taste in men). I also adore his girlfriend storyline, him and Mandy (Jane Levy) protecting each other by forming a fascinating mutually-beneficial relationship. They may not be having sex but I’d venture that their relationship is far from fake. Having her has helped him keep his head about his screwed up sexual relationships that aren’t as deep as he wishes. Played with heartbreaking subtlety by the babyfaced Monaghan, Ian is the stillest of waters in the Gallagher household and consequently the deepest.

Oh, and William H Macy is… well, come on, he’s William H Macy. He’s awesome. He’s always been awesome. Surely, I don’t have to dedicate a paragraph to William H Macy and his over-the-top, brazenly bad Frank the Plank. If I had the time I would dedicate a paragraph to the wonderful Joan Cusack, a master of awkward comedy and heartbreaking neurosis. Or Tyler Jacob Moore, whose virginal good guy is perpetually stomped on by our supposed good guys. Or the unbelievably scary Eddie, played with slow-burning fury by Joel Murray. Or Shanola Hampton and Steve Howey’s strangely grounding eccentric neighbours/ steady confidants Veronica and Kevin. I could go on and on because I haven’t been this engrossed in a series this quickly in years (I don’t think since Veronica Mars have I plowed through episodes so fast). Shameless is excellent. Don’t let Entertainment Weekly or anyone else tell you it’s crass, preachy, pretentious, easy, or any other terrible thing- because I have a sensitive radar for such things, and I’m here to tell you they were wrong about Shameless.

*PS: Soo NOT a comedy. Why on earth would you promote this show as a comedy? It’s got a sense of humour, that’s for sure, but this thing is a drama, no question.