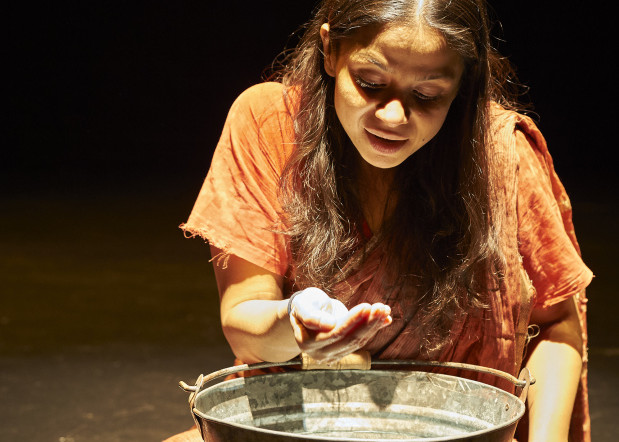 In case you missed it the first time around, you’re in luck because Pyaasa is currently being remounted at Toronto’s Theatre Passe Muraille. Written and performed by Anusree Roy, this is a one-woman show detailing the story of a family of Untouchables in India.

Set in Calcutta, the story revolves around 11 year-old Chaya, only daughter of two Untouchables, who dreams of going to school. Unfortunately for Chaya, the reality of her caste means that instead of school, she has to work to help to support the family. Her mother begs her boss to give Chaya a job at a tea shop. The job changes Chaya’s life, but not in the way that she expects.

The play deals with the intensity of classism and misogyny as it manifests in the Hindu culture, but also depicts a reality that is all too familiar to many Canadians. The story is depressingly common, but the way Roy tells it is nuanced and sophisticated. The set is simple – a single can that collects the leaky bridge water, a metaphor for the social and emotional state of Chaya’s family. The set and lighting are simple and so the show relies entirely on Roy’s storytelling abilities, and her performance is no less than astounding. In under an hour, Roy carves out and brings an entire world to life, playing a myriad of characters with a kind of grounded precision that more than rivals Daniel McIvor. In that time Chaya’s world is built up and overturned in a narrative that is simple in its structure but so very emotionally complex.