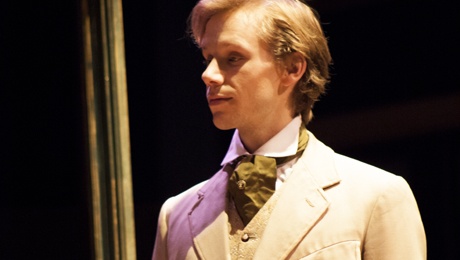 The Picture of Dorian Gray at Trafalgar Studios

Oscar Wilde’s beloved novel has been adapted into a play and is currently showing at Trafalgar Studios; it is not an event to be missed for all the Wilde enthusiasts of the world. Adapted by Merlin Holland and John O’Connor, it brings together elements from the story which was first published in Lippincott’s Monthly Magazine, as well as elements of the book itself, making for an absolutely fantastic script put onto the stage. The production brings in beautifully elements of crime, friendship, scandal, tragedy and love which are so crucial to the story, yet the theme of mystery and fear still manage to loom in the background all throughout the performance.

The set design of Dora Schweitzer shows a tremendous effort in doing a lot with just a few elements. Scenes go from one home to another, to the theatre, the garden, and even Dorian’s attic, yet so little furniture is on stage. This does not bother the audience in the least. Au contraire, the subtle change of décor, combined with the use of lighting to darken parts of the stage, transports all of the spectators to different areas of London very easily. No one realizes the extent to which the stage is miniscule unless it is the intermission, where everyone must take a breath from 19th century London. Furthermore, music and surrounding sounds are brought in at good times to further bring the audience to the world in which Dorian is living. Be it birds chirping, a crow howling or even the music taking over Dorian’s dreams, all of it adds to the strength of the production. The frame of Dorian’s painting is crooked, which adds a fantastic detail, and though it is a hollow frame, the audience can easily imagine the changing nature of this terrifying and mysterious portrait of Dorian Gray.

There are only four actors in this play, yet at times it feels as though there are sixteen. That is because every actor, aside from Dorian, plays a multitude of roles, allowing their talents as masters of the stage to shine. Rupert Mason portrays Basil, the painter terribly in love with Dorian, but also a hilarious elderly duchess bringing a delightful comical aspect to the play, a ticket vendor, a frame storeowner, and even more. All of these are done beautifully. John Gorick’s portrayal of Lord Henry Wotton is also fabulous. It is almost frightening the way in which Gorick plays this role so well, as if a version of Oscar Wilde himself was on the stage of Trafalgar Studios. Helen Keeley must also not be forgotten for her variety of 19th century female roles, each done better than the next. Without a doubt, Guy Warren-Thomas’ performance as Dorian Gray is spectacular. His character development from the first to the second act is wonderfully executed. He manages to maintain both a youthful innocence and a devilish conscience, which is exactly how readers imagine him when they read the book. Physically, he could not suit the role more perfectly. His gaze is both terrifying and innocent, and the beige suit he wears throughout the play keeps this ambiguity between innocence and sin.

Trafalgar Studios offers an exceptional night back to Wilde’s wild 19th century London to a world of sin, scandal and art until February 13th. The only complaint to this performance is that it should be showing for a longer period of time.