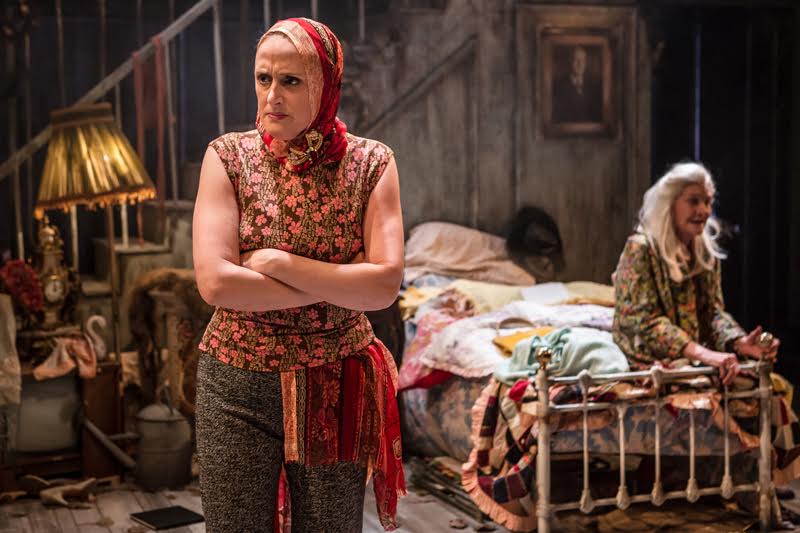 Grey Gardens at the Southwark Playhouse

Uniquely written, eloquently put together and beautifully performed, for one hundred and twenty minutes we are given an insight into the highs and lows of the once celebrated Beale family who lived at Grey Gardens.

For the first half of the show, we are taken back to 1941 and introduced to ‘Edith’, a self-assured but eccentric mother whose love for performing seems to distract from her marriage troubles and inability to engage with her daughter ‘Little Edie’. The interaction between these two characters is the main focal point of the show with Jenna Russell and Rachel Anne Rayham both displaying insightful and deep performances in their respective roles. Russell brings ounces of confidence and class to ‘Edith’, while Rayham mixes naivety with determination in her performance. The supporting cast also do a great job in their roles, namely Aaron Sidwell as the stalwart ‘Joseph Kennedy’ and Jeremy Legat as the flamboyant ‘George Gould Strong’. The act feels more like a period drama than a musical with the songs so eloquently slotted in-between the dialogue. Doug Wright’s intelligently written book keeps the show moving and allows the accomplished actors to display the quirks and insecurities of their characters. Despite the lavish setting and heated interactions the show never feels intrusive or overwrought, but rather is beautifully subtle as it presents this dysfunctional family and their struggle to keep things balanced.

While the first half is both entertaining and intriguing, it is after returning from the interval that we get treated to a truly remarkable master class in acting. Set thirty years later, Russell switches roles to ‘Little Edie’ while Sheila Hancock takes over as ‘Edith’. In the time between, both characters have become recluses, living together in the once lavish but now rundown and unfit for purpose stately home. Jenna Russell’s portrayal of the older ‘Little Edie’ sees her as a hopeless, estranged and slightly schizophrenic woman while still fighting to hold onto the ambition and charm we saw in Rayham’s take of her younger years. It truly is a remarkable performance from Russell highlighted even more by its stark contrast to her first half portrayal of ‘Edith’. Hancock is equally wonderful in this act as the once theatrical and now slightly dishevelled lady of Grey Gardens, justifying yet again her plaudits as a star of the London stage. It is largely just Russell and Hancock who feature in the both humorous and tragic second half and the show makes no excuses for the uncharacteristically slow pace of the drama. It meanders through unobtrusively, as we learn how the two characters fell from grace and the strain of their complex yet loving relationship. In fact, it is the moments when the ensemble are added to numbers where the act feels slightly less authentic and messy, and it may have worked better had it just featured the two leads throughout.

The interspersed songs are mellow and solitary and perfectly complement the mood. Music is a recurring theme of the show, with the Broadway stage being the ambition both characters once longed for. It is when they are singing you see the hope that has slowly fallen into despair and really begin to empathise with these difficult characters. Scott Frankel’s score, while not particularly memorable, is beautiful and incredibly appropriate to the piece. The instrumentation is contemporary of the setting and it is clear that both Frankel and lyricist Michael Korie understand how to create both wonderful and fitting songs. The set design is beautifully grand and director Thom Southland uses the traverse space well to create an appropriately cluttered and natural feel.

This eloquent musical has already come close to selling out its limited run at the Southwark Playhouse but if you can still get tickets, I would strongly recommend you do so. It is incredibly satisfying to see this gem of a show do so well and I hope that Russell and Hancock receive the plaudits they deserve come award season.