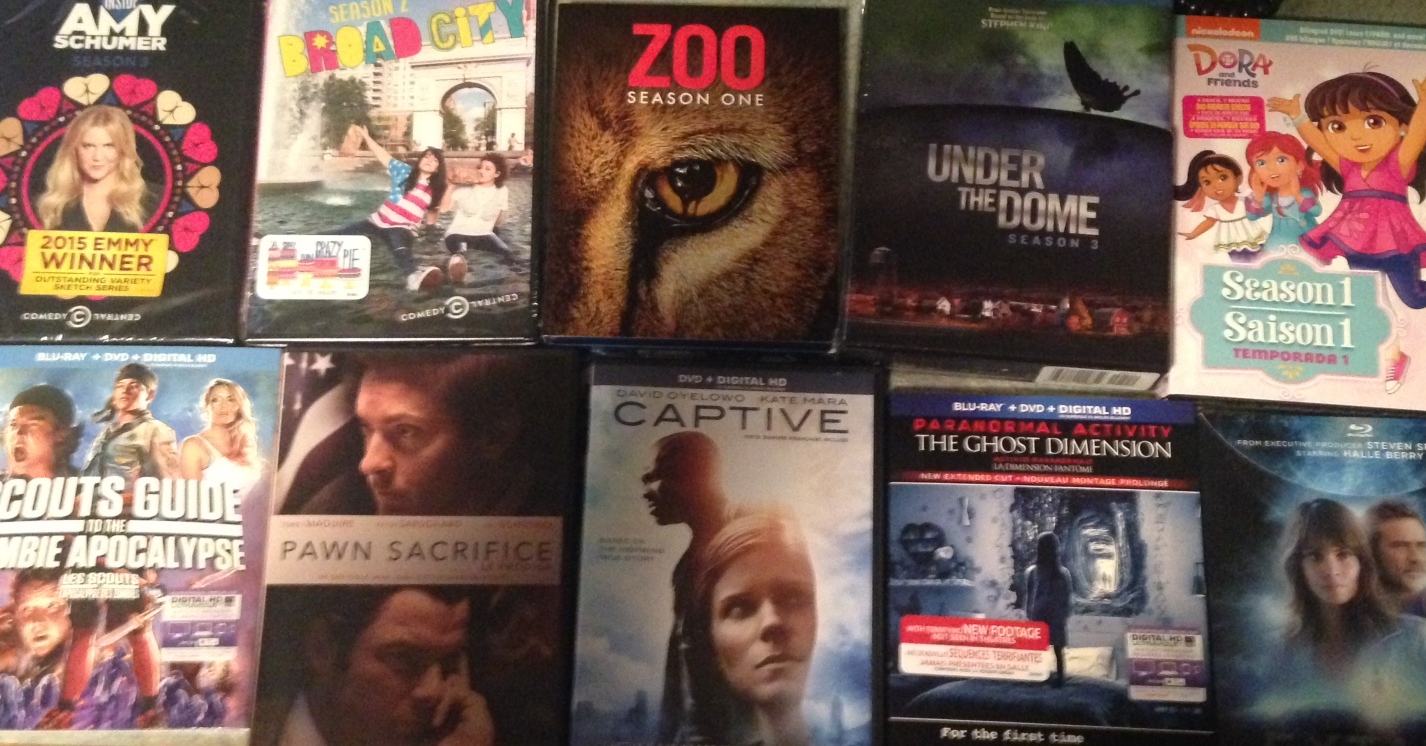 It’s time, once again, for the On DVD series featuring new releases from Paramount Home Distribution, Elevation Pictures and more!.

Inside Amy Schumer: Season Three
This show was great in seasons one and two but it just keeps getting bigger. The special features on this disc don’t amount to much but the rewatch value is high and the sketch format (especially with so many classics this season) makes it the perfect party background set.

Zoo: Season One
The impossibly handsome, genuinely funny, oldschool movie star-ish James Wolk is one of my favourite actors. Do I wish it was Political Animals or The Crazy Ones or the two-episodes-and-done Lonestar that was the vehicle to successfully deliver James Wolk to my TV screen over multiple seasons? Absolutely. But Zoo it is. It’s bonkers and sometimes surprisingly boring but, hey, I’ll take it.

Under The Dome: Season Three
This show, though, I completely don’t get. I’ve been forcing myself through it with the understanding that it’s a “limited series” and therefore not a huge time commitment. But it just won’t end! The cast is good and the special features on this Blu-ray set are excellent but, much like the dome itself, I’m always wondering What Is This Show and Why Is It Here?!

Broad City: Season Two
YES PLEASE. One of the best shows on TV, Broad City has such impeccable re-watch value that I didn’t even need the special features on this DVD to be as good as they are. I’d pay almost anything to own these excellent 10 episodes.

Dora and Friends: Season One
Most Dora discs (and kids DVDs in general) have a handful of episodes at most. On one hand, the fact that kids like repetition makes those sets a smarter choice (why pay extra for extras you don’t need?) but the full first season of this older-Dora spinoff, in my opinion, is worth it (if you can stand Dora, which most parents can’t). There are 18 episodes here and the DVD is bilingual because putting up with Dora sometimes seems worth it if you can keep alive your pipe dream that she’s gonna teach your kid Spanish.

Mission Impossible: Rogue Nation
Did it bother me that there was literally one woman in the entire movie and Paula Patton was mysteriously dropped from the team? Obviously. Did a major piece of plot development happen by way of “look at this sketch, you can feel that he trusts this person”? Unfortunately, yes. But MI5 is yet another excellently executed version of everything the Mission Impossible franchise is and nothing more than that. There’s a killer sequence set to a Puccini opera and another amazing scene where Simon Pegg is strapped to a bomb and blowing everyone away with his spectacular (and wildly underrated) acting brilliance. I got everything I came for and that’s more than a lot of movies give me. The DVD/Blu-Ray/Digital HD disc is absolutely packed with featurettes and the movie definitely has rewatch value, making this a good buy.

Captive
This strange, faith-tinged but impeccably acted kidnapping drama comes to DVD/Digital HD with decent special features and rewatch value. I never love the much-loved Kate Mara but David Oyelowo is, as always, a revelation.

Scouts Guide to the Apocalypse
The DVD version of this silly zombie movie that mostly appeals to teenage boys is selling for 30 dollars. Just the movie, in standard definition. The Blu-ray/DVD/Digital HD combo pack is an extra $10 and comes with 6 pretty decent special features. I’m not really saying either is worth it, but one is definitely not worth it.

Pawn Sacrifice
This extremely competent biopic has been unfairly overlooked this year. It’s a tad more conventional than it needs to be, especially considering the wealth of philosophy and stirring imagery conjured with the word “chess”, but the acting is excellent and, with the exception of a too-long sequence meant to reflect the noise in Bobby Fischer’s brain as he tries to concentrate, the chess sequences have great tension and stakes. The DVD only has one special feature and it’s not particularly insightful.

Paranormal Activity: The Ghost Dimension
This thing isn’t just a standard DVD release, it’s a “Blu-ray 3D + Blu-ray + DVD + Digital HD” release. It’s actually 3 discs with the film in every format you could possibly want, including rated and unrated, theatrical and extended, standard definition and high definition plus an alternate ending and 3D deleted scene. The re-watch value on most horror films is less than nothing but, in case you want to show this to someone who hasn’t seen it yet, this disc gives you all the formats you could ever need.