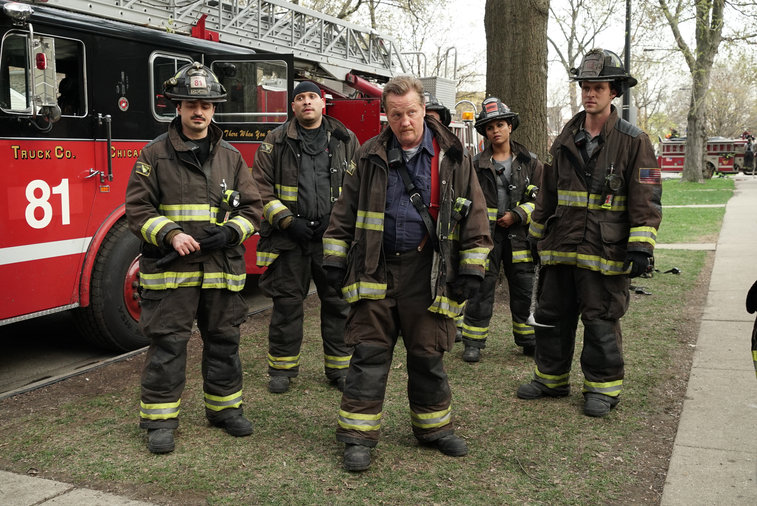 Halfway through the forth season of Chicago Fire I find myself wondering what I’m missing. Where did the Gabby baby storyline go? Why is Chili being a raging bitch? I’d like to chalk it up to my inability to watch a show without simultaneously playing Candy Crush on my phone, but unfortunately, I believe the problem stems from the Chicago Universe as a whole. Between Fire, PD, and, now Med, there are just too many characters and too many interweaving storylines for me to follow. Fire had aired six episodes of season four by the time Med premiered, the first five of which featured a cameo from a character from Med. The only episode that didn’t was “2112” which aired in the hour before Med premiered. And hey, I could have missed one, IMDB is not infallible, despite making me that weird girl who knows far too much about that actor whose name you don’t know, but you’ve seen in everything.* My only assumption here is Nick Gehlfuss aka Will Halstead can only appear in so many episodes of Fire before being considered a regular cast member. People start to worry when their doctor becomes a regular at the local bar, you know?

The storylines this year seem to start in one show and resolve in another. I can say that, because that literally happened in the midseason premieres of all three shows when they did one giant crossover episode. I feel sorry for people who only signed up to watch Chicago Fire in 2012 and now don’t understand what’s going on because they don’t have time to be sucked in to the Dick Wolf universe. I don’t know any of those people, but they probably exist, right?

Breaking down the major storylines makes more sense by major character or characters. Firstly, Dawson and Casey have had a rough beginning and basically nothing to do with the storyline since, despite being the leads. Casey’s dramatic strip-club storyline was wrapped up in the premiere, and was quickly followed by Gabby revealing she was pregnant, something we surmised in last years finale. Nothing like an unplanned pregnancy to bring two people together. Oh, did you forget Gabby was pregnant? Re-engagement bliss can only last so long when you suffer a miscarriage. It’s too bad this story line was dropped so quickly. I wasn’t expecting a baby to end up in the fold, but something, anything on Dawson’s state of mind more after words would have been nice. Whenever something happens to a member of the firehouse, they get an episode to mull on it before someone else has a problem. Since then, the only significant role Casey has played is being the person to make my ears bleed with his awful American accent. Though, I may be slightly bias after moving to Australia.

Severide has also been kind of a non-factor this season. He got demoted, and was involved in a Boden centric storyline before being reinstated as Lieutenant but he’s been pretty insignificant, which is probably why Taylor Kinney’s real life partner Lady Gaga won a Golden Globe before he did. Come on writers, give him something to work with, that should not have been a sentence I ever had to type.

Boden was more important this year when he was accused of assault of a woman renting the house next door to his. Turns out she was hired by some guy because the firehouse did something that was so insignificant I can’t even remember it a few weeks later. Just another story line that was wrapped up by the cops over at Chicago PD anyway.

Most recently, Herrmann has played a central role in all three shows. He was stabbed by Freddie, a friend of Cruz’s younger brother, that Cruz was trying to help out of a gang. Cruz is a terrible role model apparently, because it didn’t work and the kid was sent to jail. The story started in Fire, with the whole house at the hospital, where it continued on Med while Herrmann was in the hospital. Sometime in all of this Dr. Rhodes claims Herrmann is his friend too, which is strange since they’ve never interacted in any of the storylines and since when did Dr. Rhodes get friends, he just moved back to Chicago? Also, why does everyone think Herrmann is the heart of the firehouse, the guy got stabbed because he was being rude to someone? I’m glad that’s not always the end of result of unpleasantness – otherwise my siblings and I would have made multiple trips to the hospital. The storyline completed in PD where Freddie was arrested. Last we left him Herrmann was still lying in his hospital bed, only to show up serving drinks a week later in the Chicago PD world (Fire, and Med didn’t air episodes the following week). Could you not have used any other Fire actor to serve those drinks? Was there not suspense in the unknown fate of Herrmann? Perhaps this stems unforeseen schedule changes, but if you’re going to invest so much effort into this universe, NBC, at least make it consistent.

Finally, the villain of the season award (it is awards season after all) goes to Chili for not understanding social dynamics. Girl has been all over the place this season – sleeping with the new guy, showing up late to work, and lying about important matters to save her own ass. While I usually appreciate the villain, and let’s be honest, these are all relatable circumstances, she is lacking a certain charm to be able to pull off this behaviour. We find out that she is not in fact, off her meds, but rather grieving for the loss of her twin sister. Remember how Chili has a twin sister? No, you didn’t. It was the Chicago Universe’s way of explaining how the same actress played two different roles. Before, Chili, there was Jelly Bean, a criminal informant to Antonio. They liked the actress so much, they recast her on a different show, in a more permanent role, an explained it away as a twin sister thing. Instead of addressing it and moving on, like they usually do (re: this whole post), they have decided to bring Jelly Bean back into the fold, except not really because she’s dead now. Finally, an explanation for Chili’s icy behaviour (that was almost too easy).

As the season progresses, here’s praying for a bottle episode so I can keep track of who is on what show.