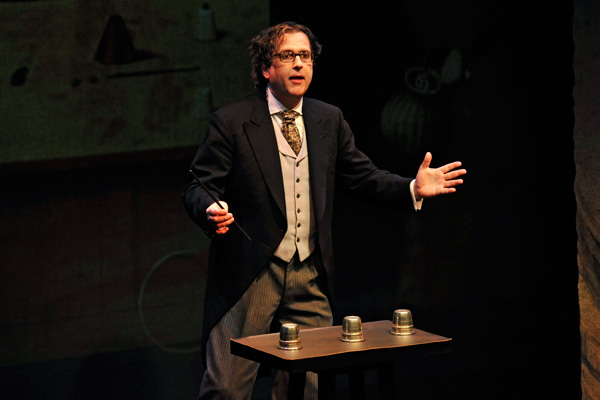 It’s unfortunate that so few magicians receive the funding or programming support to perform regularly in Toronto. Rather than a rich landscape of illusionists within which, like in any performance genre, there are some great and some not-so-great performers, all we really have on this theatrical level is David Ben. In a technical sense, that’s alright (like how the entire form of ballet is repped by the National); Ben is second to very few (arguably none) in his mastery of the classics: linking rings, cups & balls, various “guess my card” machinations. But he’s not a great showman, he’s awkward with kids (a real drawback in an audience participation-heavy medium) and his hardline approach to performing “the classics” leaves his act stale and dated.

There’s certainly merit to going back to basics and making sure the foundational pieces of the art still make it to the stage on occasion but those foundational pieces need an update, some interpretation, something exciting to put the awe back in the experience. A very halfhearted attempt to integrate technology by filming an illusion with an iPhone doesn’t count as an actual eye towards modernization. At our particular performance of Tricks (which is remarkably similar to The Conjuror, theoretically more “intimate” but only in the move from a 300 seat theatre to 200), only one illusion, the first one, elicited the sort of oohs and ahhs that should be the hallmark of any great magic show. The rest was polite applause for what we could all plainly recognize as practice makes perfect.

Ben’s dedication to oldschool magic is clearly an attempt to keep a potentially dying art alive. He’s carrying a torch forward while his flashy contemporaries compete to be the next Criss Angel. The trouble is what comes next. While Ben is here, magic has its spokesman, a stalwart scholar who still sees merit in a perfectly executed linking rings routine. But David Ben is unexciting, uninspiring, uninviting- three qualities that, to me, suggest the torch he’s carrying will go out when his era is over because it doesn’t feel likely that there’s a kid in the audience who’s going to be inspired to carry it forward