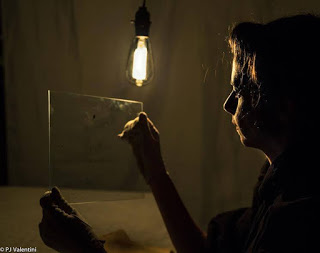 Insignificant: A Story of Merit

Long before Alan Turing laid the groundwork for modern day computing, the Harvard Computers were processing astronomical data and making scientific advances and discoveries that would drastically impact the field of astronomy and allow mankind to better understand the cosmos. The Harvard Computers began their work in the 1880s and operated for a mere pittance compared to the pay demanded by young men working in the field. The Computers went by another name as well – “Pickering’s Harem” – a callous call sign for a group of bright women who worked tirelessly without proper recognition, monetary or otherwise, to expand our knowledge about the universe. Despite having an early appreciation for science,* I somehow managed to make it this far in life without learning about the female astronomers at Harvard and appreciate that Infinite Variety Production’s new play, Insignificant, brought such an intriguing tale to my attention. Looking beyond a few pacing issues and some distracting creative choices, in Insignificant, playwright Sean Michael Welch celebrates the remarkable achievements of scientists and mathematicians at the turn of the century while also successfully exploring the professional and personal obstacles that women have faced (and continue to face) in working environments.

Insignificant opens with PhD student Cecilia Payne conversing with her mentor, Annie Jump Cannon, at Harvard in the early 1900’s about her decision to submit her doctoral thesis with an addendum – an addendum that recants her monumental finding that the sun is actually made of hydrogen. Annie, horrified by Cecilia’s decision, tells Cecilia about her experiences as a young Harvard Computer working alongside notable female astronomers like Williamina Fleming, Antonia Maury, and Henrietta Swan Leavitt. The four scientists endure everything from mild slights to outright hostility at Harvard because of their gender, they are paid dismal wages despite their significant scientific contributions, and they are refused recognition for their efforts (often being relegated to footnotes in a male professor’s publication). The women bond over their shared struggles and each approaches her job cataloging stars with gusto, despite being underappreciated – but the strain of their position takes a toll. Antonia fights bitterly for distinction and failure eventually drives her away from the institute and strains her relationship with Annie. Williamina struggles to raise her son independently on a small salary and Annie eventually accepts her secondary role at the institute. However, it is sweet, level-headed Henrietta who suffers the most despite her brilliant work on the measurement of distance between objects and the earth. Ultimately, Cecilia is left to ponder what her own achievements mean not only for future women in the scientific profession but also for the women who came before her and diligently paved the way for her success in the field.

Despite the dialogue drifting precariously close to preaching at times, Welch works hard to illuminate social and professional barriers for women in the first part of this century while also heralding the successes of four scientists overlooked by history. This is not to say that the issues explored in Insignificant are a thing of the past. Commentary on wage disparity between men and women, the socioeconomic struggles of single working mothers, and the entitlement and overconfidence that lead some professional men to make work places infuriating spaces for women** are interwoven into the plot as well – drawing parallels to ongoing problems in the United States and elsewhere. The greatest flaws in Welch’s work include the self-aware dialogue acknowledging that the play is not real and some thematic devices that do not befit the tone of the show. For example, rather than have Annie tell Cecilia about her youth and rely on flashbacks, the living and deceased characters acknowledge that their on-stage interactions are part of a production. Actors even engage with members of the audience as if the audience was watching a show (e.g., “hi audience, are you enjoying the play?). The choice permits women in two time periods to interact with one another; however, this staging too often feels like a distraction from the strong narrative at the heart of the play. Additionally, the male figures in Insignificant are often presented as exaggerated caricatures of real men – entering and exiting as if they were clowns at a circus. While I appreciate that this choice highlights the absurdity of the female astronomers’ situation, it also appears to fictionalize the very real confrontations and engagements that these women had with their male counterparts (and the confrontations and engagements that women continue to have with some male professionals).

The female ensemble of Insignificant is a strong one. Of particular distinction is Deanna McGovern as the feisty and self-assured Cecilia Payne, Laura King Otazo who delivers a sharp comedic and poignant performance as the hard-working Scot, Williamina Fleming, and the delightful Kathleen O’Neill who successfully conveys Annie’s wisdom, tenacity, and embattled conscious as Annie grapples with her life-long struggle for personal recognition and the recognition of her female colleagues. However, it is Alla Illyasova’s performance as Henrietta Swan Leavitt that leaves an indelible impression. Illyasova portrays Henrietta as a timid, warm-hearted soul with a level of intelligence and passion that exceeds that of so many of her male colleagues. Her performance is genuine and makes Leavitt’s ostracization within her academic field all the more heart-wrenching.***

Insignificant succeeds in its mission to shed light on a group of gifted and industrious scientists who were ridiculed by the very group of men that benefited from their hard work and persevered, often at great personal cost, in the hope that their work would advance humankind’s knowledge. Although this piece would benefit from some careful editing and a re-structuring of the flashback sequences to eliminate all theatrical self-awareness interwoven in the plot, in totality, Insignificant presents a story about professional endurance in the face of sexism that is anything but insignificant.

Insignificant is being performed at the Kraine Theatre until December 19.

* I was the cool kid who requested that Santa bring me a microscope and a telescope on separate Christmases. Santa granted those wishes and tolerated the crazy experiments I concocted for months thereafter. Thanks, Santa.

***Please go read about this phenomenal woman who should have received a Nobel Prize nomination in physics but didn’t because her educated male colleagues were idiots. It’s cool, I’ll wait.