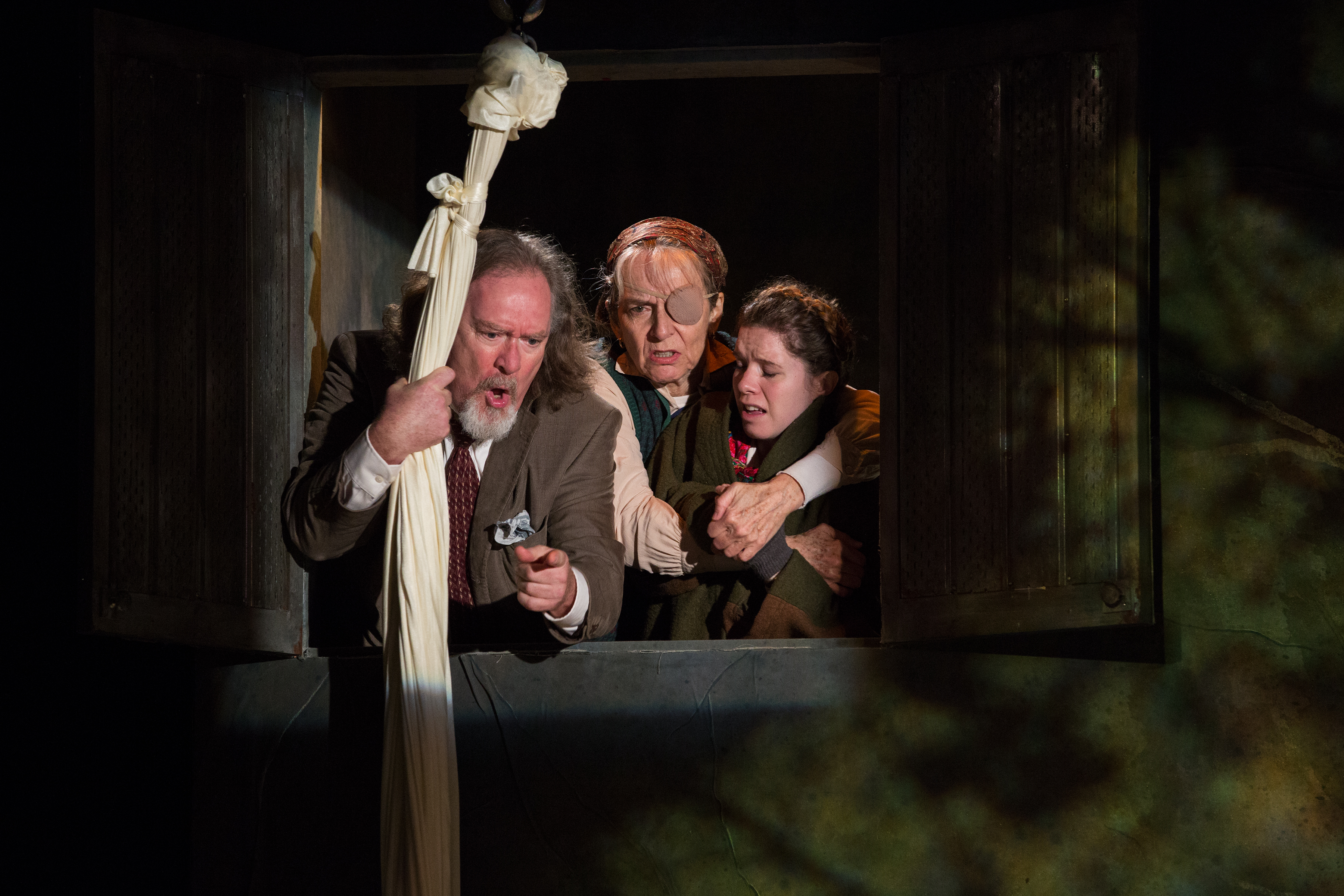 There was a buzz in the air as I found my seat at the Tarragon Mainspace at the opening night of Wormwood. The theatre was packed to see the latest from Tarragon’s Playwright-in-Residence, Andrew Kushnir. Audience members trickled in from the lobby where Ukranian folk singers had just entertained the crowd. An announcement was made before the show that there will be a reception following the performance, complete with vodka shots. A Bandurist (Victor Mishalow) sat to the side and provided the live score for the play, from underlining the scenes themselves, aiding scene transitions, and even at one point mimicking the sound of a cell phone.

As you may have already guessed, Kushnir’s play is set in the Ukraine. The ‘Orange Revolution’ has just transpired, and it is the awkward political period right before the elections for the new president. A young Canadian of Ukrainian decent, Ivan (Luke Humphrey), travels to the Ukraine to observe the election process. Children of Canadian families tend to be nostalgic for their family’s roots, thinking of themselves as a continuous part of that culture. But from the moment that Ivan arrives, he’s seen as an outsider, and is tricked and manipulated by the people he encounters. He doesn’t speak the language the way they do. Some of them refuse to speak Ukrainian, demanding to speak Russian, or, if they must, English. His host family sends his brother to another location, hoping to get him to fall in love with their daughter. The victim of a staged mugging, Ivan is injured, sick, and house-bound for most of his time there, unable to leave, and at the mercy of those caring for him. He’s slipped a drug and hallucinates a woman in a garden below his window. He wakes and discovers that she’s real – but that there is something strange about this woman – Artemesia (Chala Hunter) – who at first refuses to talk, and who cannot leave her garden.

This is a play about survival: what it means to survive despite being poisoned, both literally and figuratively. It’s also a play about agency and autonomy, and what it means to be in control of your own decisions, whether we are talking about a country trying to elect a president, a nation trying to wrench independence and respect back, or whether you’re a girl in a garden who has men telling her, over and over again, what’s good for her.

The play is good, if complex. But there is so much going on that trying to keep track of things as the audience is at times onerous. As the third, fourth, fifth reveal happens towards the end of the play, I wondered if Kushnir had tried a little too much in the play. There are so many plot twists and turns, and while they do tie together, it was starting to feel a bit like watching a daytime soap opera. I wanted Kushnir to dial back some of the details in order to focus on one or two themes, instead of what seemed like a dozen interwoven themes.

The other aspect of the play that gives me pause is the main character, Ivan. I noticed at one point that I just didn’t care that much about this guy, which is sort of a problem since he’s the main character. In a scene between Ivan and Artemesia, she informs him that in fact, he doesn’t know ‘what’s best’ for her, and neither does her father. It was at that moment that I realized that we’re not really supposed to like Ivan, that instead of endorsing his character’s idealism, the play actually positions him as a kind of naïve Western influence who is fetishized but also resented. I also don’t entirely buy the love story between Ivan and Artemesia, since his effort at seducing her consists basically in just refusing to leave after she’s asked him, over and over, to leave. Ivan is entitled, naïve, oblivious and downright selfish. Meanwhile the character of Artemesia seems underdeveloped, and yet is central to the themes that Kushnir is aiming at. In fact, we realize that she embodies the Ukraine as her situation is revealed more and more towards the end of the play. As a result, I found myself wishing that the play was written from Artemesia’s point of view, instead of Ivan’s.

The play is easy to watch, and the acting is strong across the board. Despite my reservations about the emphasis on Ivan’s character, the story is told well, and there are themes here worth pondering.