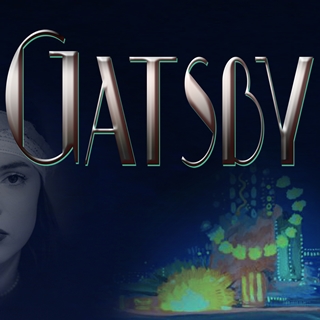 Gatsby at the Arts Theatre

It has a more authentic angle than most adaptations of F. Scott Fitzgerald’s acclaimed novel, but this musical version by Ruby in the Dust cannot overcome the text’s inherent problems and its attempt at a modern reworking lacks unity.

There is a danger in adapting The Great Gatsby: for a story about the dark underside of excess it is too easy to have this excess dominate to the point of the criticism being lost—this is what happened with the latest Baz Luhrmann film. The inverse is that the critical angle gets played up so much that the audience never understands Gatsby’s appeal—this is what happens here. Since these productions have to cut down the text (the Elevator Repair Service’s 6-hour Gatz cheated in this regard), the balance is inevitably skewed; however, I believe that the latter mistake is a better one to make than the former, and for this I credit the production’s efforts.

Hopefully intentionally, the mood of the early 1920s here is one of tiredness, as though everything is the morning after a blowout party: all are effete and passive as the action happens to them. The way the performances are underplayed lends well to a criticism of the lifestyle, but the problem is that no cares for the mystery of the eponymous hero and even Nick (Sebastian Blunt) is only mildly curious to learn of who Gatsby (David Ricardo-Pearce) actually is. Nick’s character is fundamentally altered here and for the worse: he is not a narrator and therefore occupies the same space as the other characters. This way there is little doubt as to the facts of the plot and crucially we never receive the phenomenology of narration to make us get why Gatsby is worth caring about; the rumours of his prestige do not have effect on us because we do not have them filtered through Nick’s perspective; when the veneer falls away we feel nothing. Ricardo-Pearce is a nicely internalised Gatsby who makes his views on Daisy appear progressively more outlandish as the story continues and lets his guard down quickly—it is refreshing to see an actor who forces the ‘old sport’ phrase as the text clearly intends. Nevertheless, while he conveys the stripping of prestige, there is no hope seen in his character. It may have been that director Linnie Reedman intended it to be this way but this is precisely what sets the novel apart from other cynical works: what makes it special is that it exists in a superstate: it is at once a paean and a polemic to the American Dream. The one actor who understands this is Matilda Sturridge, rendering Daisy’s eternal sadness with slight hints of optimism, making her the eminently empathetic character.

The real inconsistencies appear in the music of the production, which trades off the opportunity of authentic twenties jazz for bogstandard broadway fare. The six-piece band (Benoit Viellefon and his orchestra) is always sharp, yet what they play contradicts the cast’s anachronistic voices who sound firmly and blandly in the twenty-first century. There is also the classic problem—and this is partly a deficiency in the range of early jazz music—that the songs sound too similar and not in the sense of having a consistent style. There are standout singers like Maria Coyne and Kim Metcalf, yet not even they can deny the fact of a missed opportunity. While I know this is a sombre take on Gatsby, what is also missed is the presence of period dancing and not mere half-done choreography to fill space in a song; for the time of the charleston and other developing swing dances, there is nothing on offer here.

The set is well conceived: great hollywood-sign-style letters of G-A-T-S-B-Y are flipped 180 degrees, the grimy backs representing the true nature of the characters’ decadence. The set has been constructed on top of that of the Arts Theatre’s current show, American Idiot, and although this would always naturally restrict there is the issue that with all that appears on stage, the space is used in a cursory way: the action is squished into centre stage and the result is boring.

What has happened here is that Ruby in the Dust have attempted an adaptation that does not care for trifling details. It works, and the critical trumps the superficial in potent ways; however, the fact of it adding a contrived musical structure wounds the criticism and drama it sets out to create.