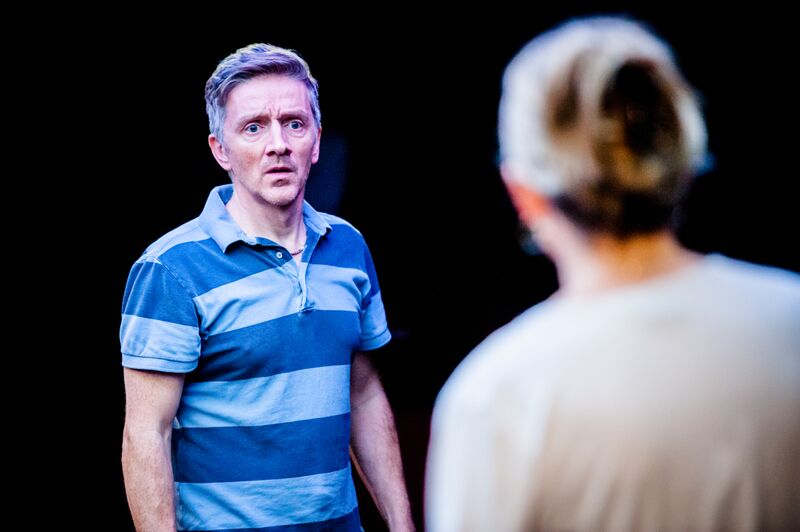 Did this play deserve its Olivier Award nomination last year? Absolutely. Its development of character, slow revelation of plot and bitingly black humour make James Fritz’s work a triumph of new writing. The story revolves around two parents, Di and David (Kate Maravan and Jonathan McGuinness), whose son Jack has been beaten up on his way home. We learn that Jack has made a film of him and his girlfriend Cara (Ria Zmitrowicz) having sex which has been leaked online. Cara’s family are displeased, and so Di and David play detective in ascertaining the facts of the matter.

Di and David as the protagonists are judiciously well-crafted by Fritz: each scene effects a change in them, particularly the deconstruction of their ostensible parental roles, yet crucially the play concerns their lives and so the existence their son, who never features onstage, becomes an incidental aspect of their dismantling. As the truth, or the perceived truth, overwhelms them they change, and it is genuine change: by the play’s ending these characters have undergone emotional ruin and fundamentally altered the constitution of their marriage; in the beginning, Di and David unequivocally work in tandem to solve the dispute between Cara’s family and Jack. However, the truth divides them—their work inexorably fractures with Di taking the lead role. Never willing to stabilise her character, Fritz has Di’s allegiances change spectacularly over the story’s course, leading the audience and herself to constantly question her presumed fidelities to her neighbours, her husband and her son.

The play’s master structural-stroke is the absence of Jack. The audience has no perception of him other than what the characters perceive him to be. We in this way vicariously experience the radical transformation of Jack’s image in the eyes of his parents. His existence is mercurial, and so at each accusation of his wrongdoings (which progressive worsen in nature) the audience feels the same paradigm shift that Di and David feel. To instantiate: Di and the audience initially believe Jack to have been attacked by schoolboys—instant sympathy is created for an unreal character; once we realise that fact is not true, this sympathy changes and doubt begins. This doubt engulfs the characters, in others and then eventually themselves. Whereas the perception of Jack mutates unsympathetically, this also works the other way: Di’s scenes with Cara and her longtime friend Nick (Anyebe Godwin) begin with a seemingly justified fury: we are meant to hate these people on the information given; however, the truth counters our partiality—these are good people, and the more our assertions as an audience are proved incorrect, the more our skepticism of everyone grows: the way we once thought about these people is not so much wrong as axiomatically uncertain.

I should be hesitant however to give the impression of Four Minutes as a quintessential vehicle of pacing: while the opening is pitch perfect in terms of plot and character, the revelations that bind the story happen somewhat unevenly: the greatest reveal happens too early and therefore is, by its nature, too intense for us to feel its true impact when it is structurally misaligned in the narrative. The consequence of this is that the unrestrained drama of the finale feels loose when compared to the premature climax.

Anna Ledwich’s direction is understated yet complements Fritz’s work in useful ways. The spectre of suspicion that dominates the play’s mood is backed up by the dizzying luridness of the set, two primary-coloured squares that form the stage’s floor and ceiling. Ledwich’s meticulous choreography of the thrust stage is also essential, meaning that each actor is seen in their totality by the audience, an urgent demand of a piece that relies so heavily on registering the transient states of its characters. The cast is similarly accomplished: Maravan nails her role as the inquisitive matriarch while McGuiness fully characterises Jack’s pusillanimous father. Zmitrowicz and Godwin similarly provide an unexpected sympathy, bringing righteous anger and sincere comedy in their respective portrayals.

Four Minutes Twelve Seconds is strong. Formidably strong. Although it may possess a flimsier ending than the quality of the writing anticipates, Fritz and Ledwich have produced something new and visceral and for that I readily look forward to wherever their dramatic trajectories take them.

The play runs until 5th December at Trafalgar Studios 2