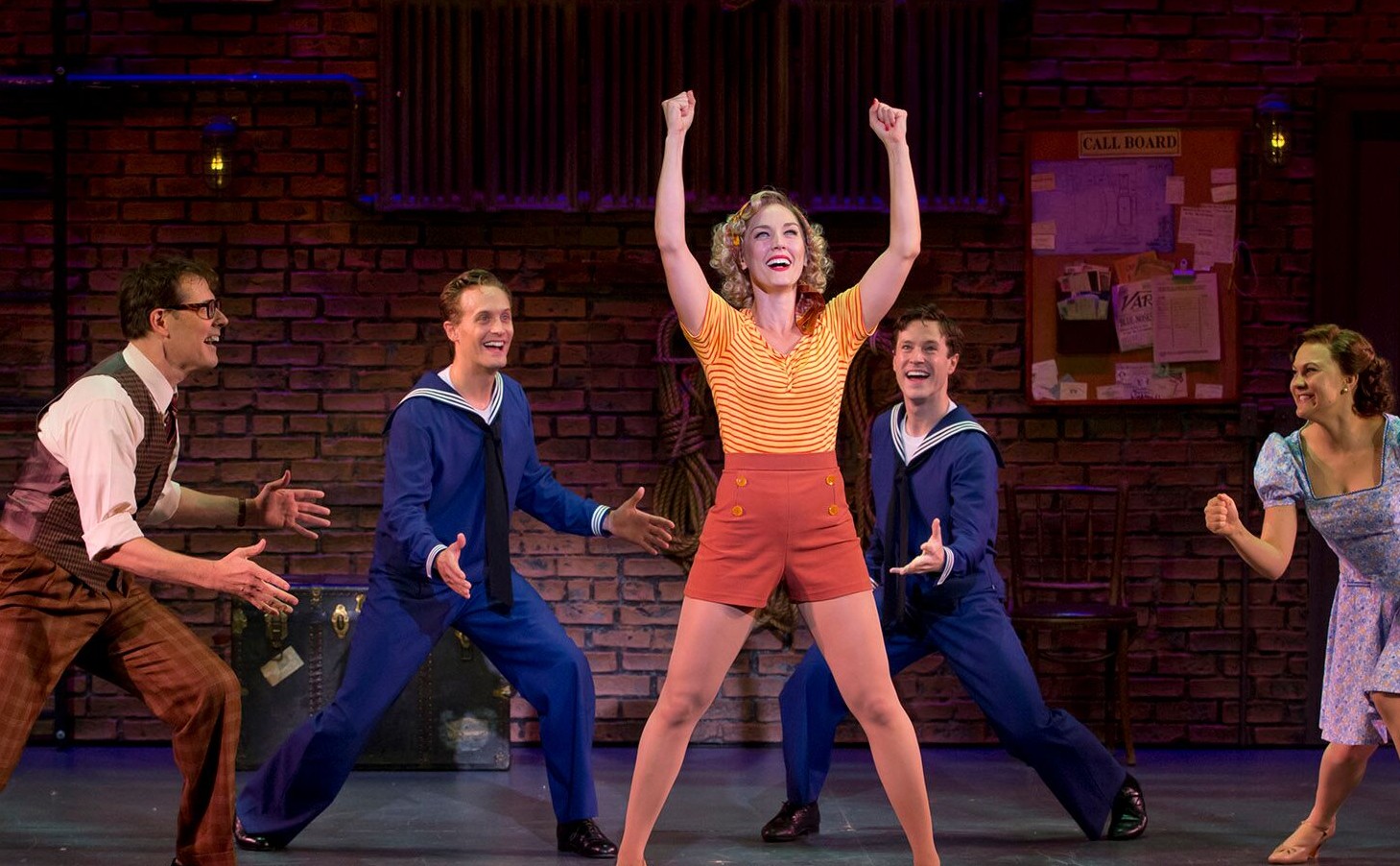 Dames at Sea: Old-Worldly, For Better or Worse

Early in the first act of the musical Dames at Sea, cast members scurry around the stage as they practice for a dress rehearsal of “Dames at Sea”, which is to premier that very night. Even indoors, warm lights fill the stage with a yellow glow as if somehow the sun can shine just as brightly inside. This is fitting, because Dames at Sea invites the audience into a world where a piano rolls onto stage the exact moment an aspiring composer needs one to impress a famous actress. A woman can faint knowing that a handsome sailor will catch her.  Blanche Dubois could step off a bus and become an overnight Broadway star if only she remembers to bring her tap shoes.

Debuting off-Broadway in 1968, Dames at Sea was a parody of 1930s Busby Berkeley-style musicals, such as 42nd Street.  Instead of large choruses performing multi-leveled geometric-patterned dance numbers, however, Dames at Sea is scaled down with a cast of six.  The six are effective in creating high energy dance numbers with the help of complementary color schemes and occasional props. That feat is in no small part thanks to director and choreographer Randy Skinner, who un-coincidentally was nominated for a Tony for the 2001 revival of 42nd Street.

Now, in the year 2015, 1968 is just as far removed as the 1930s were when the original off-Broadway cast of Dames at Sea premiered.  This certainly has its disadvantages.  The cultural references may seem dated to anyone born after the Johnson administration. Songs such as “It’s You” with references to Noel Coward and Bert Wheeler won’t pack the same punch today with younger theatergoers. Even though Dames at Sea shows its wrinkles, it is difficult to leave the theater without a grin and at least a hint of nostalgia for classic Broadway.

Dames at Sea tells the story of Ruby (Eloise Kropp) arriving off the bus from Utah and hoping to make it big. Resembling Dorothy Gale, with her blue dress and red tap shoes, Ruby provides little doubt that she will ultimately tap her way to triumph as a Broadway star. The plot itself offers no real surprises. The “small town gal trying to make it in the big city” McGuffin is purposefully tired for comedic effect. Along the way, Ruby falls in love with the sailor and aspiring composer Dick (Cary Tedder), befriends the Broadway chorus girl Joan (Mara Davi), and clashes with the aged star Mona Kent (Lesli Margherita). At each step, things seem to go wrong for Ruby, but never for very long. Every sign of trouble is met with the ridiculous and the serendipitous, pushing our heroine back onto her road to stardom. Everything works out, of course, culminating in a fantastic tap dance routine in an odd yet strangely memorable second act song (“Star Tar”).

In 1969, Bernadette Peters had her breakout role playing Ruby. In today’s production, it is Mara Davi who is the real standout.  Ms. Davi seems to have been plucked from the 1930s and dropped into the Helen Hayes Theater. Her comedic timing seems effortless, and her mannerisms are impeccably old-world, as she slides and bounces across the stage like Groucho Marx bent over with a cigar.  She also ends the first act with one the musicals most memorable numbers (“Good times Are Here To Stay”).

There is a very cynical way to view this musical, and this author admits dipping into such cynicism at times. After all, in 2015, a time full of memes and instant online entertainment, audiences have become desensitized to parody and the ridiculous.  How can Dames at Sea compete in the twenty-first century? This is especially true because the humor in Dames at Sea repeatedly relies on the same premise that it is preposterous that the naïve girl straight off the bus could succeed so quickly and effortlessly. Similarly, chorus members who fail to master a routine on their first try perfect it on the second go.  There is also a moment when the chorus in the background is bopping along to the music with their hands outstretched and their fingers extended in the Broadway equivalent of the movie Bring It On’s “spirit fingers.” It was the moment this writer could no longer tell if Dames at Sea was a parody or if had become the show it was intending to parody.

Regardless of the weaknesses of the musical, there is a certain charm to experiencing the show, like re-discovering a favorite childhood movie a few decades later. It was difficult to not enjoy the show in large part due to the charm of the actors. Their carefree performances were contagious as they tapped and sang and delivered even the most corny of lines.

At one moment, Lucky (Danny Gardner), a sailor and the love interest of Joan, gets grabbed off the sidelines by producer Hennesey (John Bolton) and ordered to join the chorus. Lucky proclaims, “I’m not even in the show!” even as he inevitably masters the dance routine in seconds.

As an audience member, you get to decide whether or not you want to throw off your year 2015 cynicism for a couple of hours and join in the fun of Dames at Sea. Ultimately, this theatergoer did.