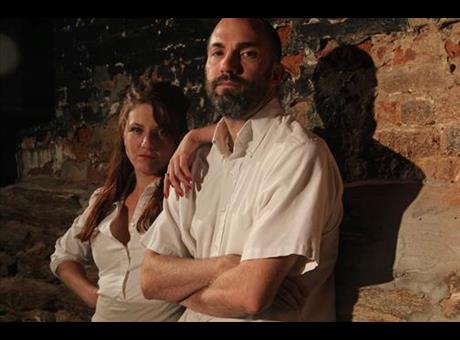 Full disclosure: I have not nor will I ever be a fan of scatological humor. Just not my cup of chili. That said, I highly recommend taking an hour out of your evening to dissect The Pumpkin Pie Show: Labor Pains, currently playing at Under St. Marks in the East Village as part of Frigid New York. Ick factor aside, it’s a prime example of how sometimes theater isn’t about the subject, it’s about the presentation of that subject or, in this case, the remarkable talent of the presenters.

Don’t get me wrong – The Pumpkin Pie Show is very funny stuff. And the laughs are authentic, not of the fake variety you often hear at shows like this (usually some guy seated right behind me, guffawing at every line of dialogue). It’s just that the kinds of images that will unavoidably enter your head over the course of the hour won’t be pretty and may even repulse you as they did me, but if you’re a parent with a newborn – or simply a human being with a working digestive system – it won’t be anything you haven’t seen a million times (at least on those days you’re feeling regular).

The show is comprised of five stories, each one funnier and darker than the previous, and each is a mini tour-de-force for the two individuals tasked with laying them before us. The first, “Labor Pains,” is about a woman who, propelled by the gut-wrenching agony of a new life passing through her loins, pops out not just a baby but a secret, something involving a hairy creature and a tent (I’ll stop there). Let’s just say it’s enough of a shocker that it doesn’t matter if her husband is invisible to the audience – you can still see his face hitting the floor and smashing into pieces. Hannah Cheek is positively delightful here as a wife with exceedingly bad timing and a mother who’ll have a lot of explaining to do in years to come.

The next segment, “Diaper Genie,” is the real showstopper here, though I must precede any discussion of it with the following public service announcement: have dinner before the show. If you don’t, even if you retain your appetite, you might have a hard time getting certain pictures out of your mind while you’re slicing up your meatloaf. It’s a tail – sorry, tale – of the discharges one young father finds in his infant daughter’s diaper and how they come to change his life in a very real and peculiar way. But it’s his in-depth descriptions of the sizes, smells and designs of these discharges that will not only make you happy that you ate already, but may also cause you to glance away from the wonderful Chad McLeod Chapman as if he’d brought props (he doesn’t, thankfully). Things eventually turn dark as this father who only wanted to do his part to care for his baby evolves into a man who begins to exploit her unusual gift for personal gain. It’s every bit as eccentric as Mr. Chapman is engaging.

“Pick of the Litter” is a brief but chilling study of a woman (Ms. Cheek) as she surveys a playground full of children, none of which belong to her. This proves to be an inconvenient detail as it won’t stop her from taking one home anyway. Even if you dare to imagine what for, it won’t stop you from wishing “Litter” was a bit lengthier so that the audience could gain more insight into this monster masquerading as just another mom.

“That Family,” easily my favorite sketch of the evening, details the nasty showdown between a father with a screaming newborn who disrupts a flight to Italy and the passengers who are ready to kill the child. This piece is a rollercoaster and a field day for Mr. Chapman, who attacks the material like a crouching tiger, outnumbered and backed against the wall. Like a good suspense novel, the tension just keeps ratcheting up with Mr. Chapman’s despondent dad desperately trying to find a way to quiet his child and protect her from the army of sleep-deprived zombies closing in at the same time. I could just feel the audience, possibly filled with parents who’ve been in this father’s shoes, sending this guy collective empathy, especially when some pissed-off jerk with no understanding of parenting flat-out threatens Mr. Chapman’s baby. This is when things really get menacing as Dad realizes he has nowhere left to run. Hold on for dear life.

Finally, “Mama Bird,” the piece that closes the evening, is yet another testament to Ms. Cheek’s very real acting abilities. She assumes a character both noble and terrifying, loving and sinister, indicative of the reality that sometimes a parent’s desire to protect and nurture a child can go too far. And given that the child in question sounds like something out of a 1980s Wes Craven movie, you also know that it’s unlikely the life of this child or her parents is destined to end well. The Pumpkin Pie Show: Labor Pains will make clear to you that this child, like the stars of the play, is capable of just about anything.