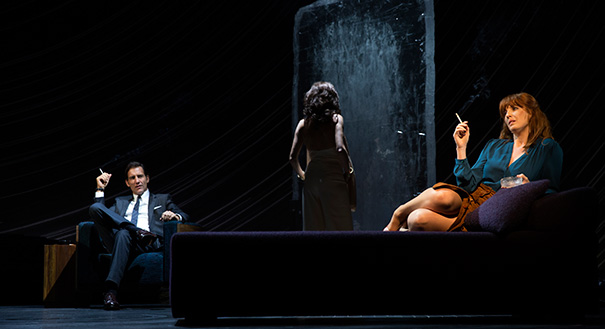 “What the hell just happened?”

My first words when the curtain closed are indicative of where this piece is headed, so take a deep breath with me. Roundabout Theatre Company’s revival of The Old Times may be unintelligible, but the fault does not necessarily lie with the director, Douglas Hodge, the three-person cast of Clive Owen, Kelly Reilly, and Eve Best, or any member of the creative team. Frankly, to borrow a quote from Winston Churchill, Harold Pinter’s play is “a riddle, wrapped in a mystery, inside an enigma.” Even Roundabout’s artistic director suggested that “the play defies easy analysis or categorization.” To some, such incoherence means that Pinter’s work is brilliant. To others, it is little more than 70 minutes of head-scratching torture. At first, I fell in the latter category; however, after some days of intense pondering, The Old Times has grown on me. I do not mean that I suddenly comprehend everything that I witnessed, but I am (now) content in my bewilderment.

The setting of The Old Times is a mystery. We know that it is autumn and nighttime . . . that is about it. Christine Jones’ set design has an almost ethereal quality with a backdrop reminiscent of a northern lights landscape. The starkly decorated stage includes two chaise lounges, a chair, a few small tables upon which drinks can be set, and an opaque ice-like block that sits in the middle of the stage, which doubles for both a totally useless window to the outside world and a fairly useless window into the shower (assuming you like to shower in privacy).

The play opens with Deeley (Clive Owen) and Kate (Kelly Reilly) talking about the anticipated arrival of Kate’s old friend Anna (Eve Best). Deeley asks questions of Kate as if he and Anna have never met, including musing over whether Anna is a vegetarian and if she will bring a husband with her. Playing coy, Kate never quite answers Deeley’s questions, as if she knows very little about the woman that she claims as her only friend. When Anna arrives, the trio banter and drink, discussing everything from Anna’s love life to the casserole for dinner, until the discussion turns to Kate, who remains silent and aloof while her husband and friend analyze her. Leaving the room to take a shower, in anticipation of “going out” for the evening, Anna and Deeley are left to talk, and Deeley tells Anna that they have met before – a chance meeting in college, where, after seeing Anna in a bar, Deeley followed her to a party and admired her thighs. When Kate emerges from the shower, no longer interested in leaving the house, the three tango around the idea that they have all met before, and that their former encounter may have resulted in the demise of one of more of them.

During the show, I developed two theories on Pinter’s work. At first, I thought perhaps that Kate and Anna were really a single person, which would explain Deeley’s initial lack of knowledge about Anna, Kate’s alleged best (and only) friend, and his later realization that he has indeed met Anna.* Kate at some point rectified her split personality, thereby destroying Anna (i.e., killing her, as alluded to at the end of the show).

However, the set and staging seem ill-fitting for such a supposition and certain elements of the plot, admittedly, do not contribute to this theory.

Theory number two: Kate killed both Anna and Deeley when she was in college after she discovered that Deeley and Anna were sleeping together. She has been imprisoned for her actions since that time. The play is merely a fantasy world that Kate has created in her mind – an escape from her confinement where both Deeley and Anna are not only still alive, but love her and not each other. This theory not only addresses the odd behavior exhibited by both Deeley and Anna with respect to their knowledge of one another, but it also explains why Kate is the center of much of the conversation despite her relative non-involvement in it. Moreover, it explains the setting. A prison cell would be starkly decorated and could have nothing more than a seating area, a table and (perhaps) a shower. The walls would obstruct any real view of the outside world, and Kate certainly would not be able to go out for the evening. At no point is any member of the cast off stage, and, even when Kate is showering, she can easily be seen – possibly still controlling the narrative.

The cast does little to shed light on the truth of the matter. Owen is boisterous as Deeley, charming and handsome with a drink in one hand, but he has very little chemistry with Reilly. This lack of chemistry may be an intentional acting choice, but it is a difficult one to swallow given their supposed relationship. This lack of chemistry is also due, in part, to Kelly Reilly. Reilly’s Kate is so cold, aloof, and resolutely silent that she might as well not be on stage at all, which befits the role and adds an additional air of intrigue around the plot. She is coy, as if she knows more than her stage counterparts about the truth of the situation, but she refuses to reveal it less the revelation ruin the party. Eve Best portrays the sultry and enigmatic Anna with ardor and verbally parries Owen’s questions with an enjoyable tenacity.

Director Douglas Hodge has carefully crafted the staging for The Old Times, yet his intentions are somewhat puzzling. For example, at a point midway through the play a turntable is utilized that causes all of the actors and furniture to move halfway around a circular platform.** A deliberate action, yes, but the purpose of this movement? No idea. Perhaps to signify a shift in time or an adjustment in Kate’s memory? As an audience member it is frustrating to recognize deliberate staging techniques and remain totally unaware as to the director’s intentions. Aside from these confusing staging elements, it often feels like the actors on stage are posing rather than engaging one another. Again, this could be a conscious decision (i.e., if this is occurring in Kate’s mind, people are unlikely to behave as fluidly as they would in real life – they are simply fixtures in her memory), or it could be the result of over-staging. Perhaps a little of both.

For those individuals who appreciate a challenging play that raises more questions than answers, The Old Times delivers plenty of content that warrants consideration; however, it is, by no means, a play that is likely to find mass commercial success. Both the cast and the creative team have done their upmost to further muddle the playwright’s intentions, although, to appreciate their efforts, one may need to undertake a few days of mental digestion.

**Turntables are making a big comeback on Broadway this year.