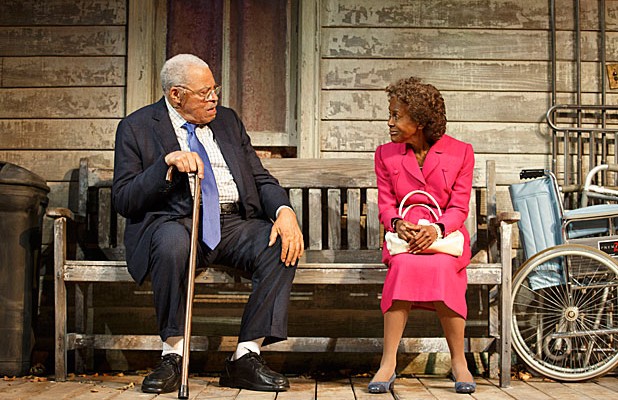 The Gin Game: A Losing Hand

While perhaps counterintuitive, staging a once-successful revival does not guarantee present-day success at the box office nor an audience enamored with the subject matter presented. The cold, harsh truth is that some plays simply do not age well. The Gin Game by D.L. Coburn, currently running at the Golden Theatre, is one such production that blends themes of domestic violence and abuse with comedy – a formula that may have worked when the play initially premiered in 1976, but one that causes eyebrows to raise in 2015.

Set at a home for the elderly, The Gin Game is about a developing friendship between two relative outsiders at the facility – Weller Martin and Fonsia Dorsey. Weller is something of a gin rummy connoisseur, and, after striking up a conversation with Fonsia who is also visitor-less during the weekly Visitor’s Day, teaches her how to play gin. Fonsia catches on quick and begins to win every hand, which causes Weller to grow increasingly frustrated and, eventually, enraged to the point of physical aggression. During these games, the pair chats about family, money and business, which are topics that only give rise to more heated confrontations between Fonsia and Weller – exacerbated by Fonsia’s increasing confidence in her gin abilities and her willingness to challenge Weller’s unreasonable behavior. Fonsia’s and Weller’s verbal and card-fueled sparring ends in disaster each time they meet, suggesting, perhaps, why neither has friends or supportive family that visit.

The relationship between Weller and Fonsia is an unhealthy one, therefore, it is perplexing that the audience would laugh at the toxic battle on stage simply because the two combatants are elderly. Weller’s outbursts of violence, in addition to wounding Fonsia emotionally, are dangerous. Losing control, Weller topples tables, bangs his cane against metal and wood, and even grabs Fonsia who, irrespective of her confident card play, is clearly a frail old woman. Theirs is a dark engagement – hardly humorous even if Weller is unable to cause much actual damage due to his age and declining health.

Hoping to alleviate my confusion as to why so many members of the audience were finding humor in Weller’s violent actions, the friend who accompanied me to the play likened the humor in The Gin Game to that of The Honeymooners. Admittedly, I have never seen the 1950s sitcom, but I am well aware that the main character, Ralph, often threatened his wife Alice with violence, despite the fact that he would never act on such threats and Alice was far stronger than her bully of a husband. Here is the simple truth: The Honeymooners would never air on television today as a new sitcom, and it certainly would not air with flippant threats of domestic violence treated as punchlines. Moreover, unlike the scripts for The Honeymooners, The Gin Game does not just suggest that Weller may be violent. He is violent.

Yet, “violent” is not a term one conjures up when thinking of James Earl Jones – a legendary actor behind some of the most iconic movie roles and the man who brings Weller to life. Jones’ onstage counterpart is Cicely Tyson, an accomplished actor in her own right. Given the respect that both of these actors have garnered throughout their exceptional careers, it is difficult to write critically about their performances; however, neither Jones’ nor Tyson’s best work is on display in The Gin Game. Whether struggling to recall lines or unable to find a natural rhythm in their onstage rapport, at times the actors trample on each other’s lines or seem to be struggling to fill silences. Granted, Coburn’s play is a bit of a beast with respect to dialogue and action. Many of the scenes are centered around a game of cards, and playing cards requires concentration. However, topics of conversation are then layered on top of the game – demanding significant multi-tasking of the performers. Irrespective of the acting challenges built into the plot, the fact is that both performances are also marred by unconvincing acting choices. For Jones, the moments that feel most forced are when Weller’s physical aggression is on display. During these action sequences, Jones looks like he is calculating each outburst of violence – straining to hit marks on stage as he topples furniture. For Tyson, the moments that feel most artificial are when she screams in terror or tries to run away from Jones. Her screams sound like school-girl squeals that could easily be construed as peals of laughter rather than yells of fear.

The artistic and creative design teams for The Gin Game similarly fall short of expectations. Riccardo Hernandez’ scenic design looks more like a rundown family home than a facility housing numerous old people, and the pile of decrepit furniture and household wares stacked up outside the home significantly reduces the stage space left for free movement – relegating all action to a few small areas of the stage. Jules Fisher and Peggy Eisenhauer’s lighting design, as well as David Van Tieghem’s sound design, is strikingly unnatural (for example, backlighting in the house that looks as if someone placed ground lighting in the middle of a room, or the sound of birds chirping, reminiscent of the singing robin that visits Mary Poppins during the song A Spoonful of Sugar). More successful is Riccardo Hernandez and Paul Huntley’s costume and hair design, which appropriately reflects the age of the characters – dressing Weller and Fonsia in simple but clean-cut garments.

In totality, the abusive relationship depicted in Coburn’s The Gin Game mars the comedy underlying the plot, and the leads, while talented, are unable to overcome the thematic failures in the play. Older audiences may appreciate the story, but young patrons will struggle to find meaning in this dated play.