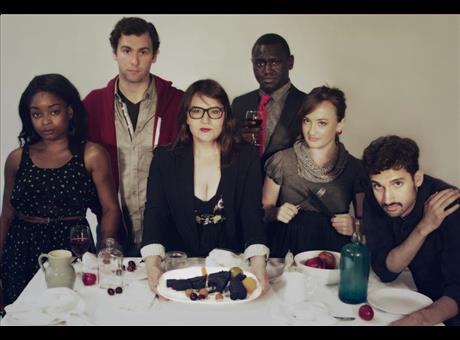 Ten Ways On a Gun

Guns and those who flaunt them recklessly are hardly a laughing matter, yet guns are the subject of Dylan Lamb’s serious and seriously funny comic drama Ten Ways on a Gun, currently being presented at Theater for the New City in the East Village. An analysis of behind-the-scenes theater politics as well as the propensity for sadism in so-called civilized society, the “play about a play about a gun” (according to production notes) hits mostly all the right notes, starting with a honky-tonk dance performed by its diverse and appealing cast. The story begins with a young couple, Tommy and Becca (Mr. Lamb and Alisa Murray), having a meal when he suddenly announces that he’s bought a gun online. This startles Becca, who can’t believe he’s done such a thing, and Tommy tries to convince her this is a smart move – that having a gun is essential in today’s perilously uncertain world. Becca does not see it that way, fearing her partner has lost his mind. From there we meet Tommy’s co-workers, a strange set of characters who, over the course of the play, will become part of his gun-sharing circle. We also meet Tommy’s boss, Rich Dick Phillips, who also happens to be his girlfriend’s father and doesn’t feel Tommy is the right man for his daughter. In a tense, well-acted scene between Mr. Lamb and Leajato Robinson as the disapproving father, all the awkwardness that comes with such a naturally-adverse relationship, exacerbated by an imbalance of power, only serve to make Tommy’s workplace that much more unbearable.

Simultaneously, we’re also treated to the inner mechanics of the theater troupe within the play who are putting on this production about Tommy and his gun, a very imaginative if somewhat bizarre curve in Mr. Lamb’s storytelling that could drive the play off the road but instead introduces a whole other set of oddballs. One is Stage Directions (Laura Darrell) – yes, that is the character’s name – who establishes each scene for the audience with a certain Serling-esque élan. She gets to flex a bit more personality later in scenes with her collaborators as they struggle with the mounting of Tommy’s increasingly complex story. Granted, some of Mr. Lamb’s text zooms past you faster than a speeding you-know-what but the strain to keep up is also due in large part to New City’s virtually non-existent sound system, though that’s more of a tech concern than a dramatic one and doesn’t rob the play of its final impact.

Given the horrific things we see on the news these days, Ten Ways does an admirable job of taking its audience on a refreshingly humorous trek across very tricky terrain, which Mr. Lamb shrewdly elevates to a higher level with blunt commentary on how something acquired for your protection can also be the greatest threat to your life. The production itself is virtually budget-free, with no set save for a low-hanging bulb switched on and off by Ms. Darrell as our narrator and a kitchen table around which Tommy and Becca converge to get the story off the ground – the most interesting costume change consists of two pairs of purple underwear – don’t ask. The director, Kathryn McConnell, works well with what little space she has and knows how to put together a cast that’s both capable and likeable, even if some are slightly more seasoned than others. The playwright, Mr. Lamb, has a very compelling stage presence and I hope to see more of him on stage in the future, either in his own work or that of other writers.

Don’t let your guard down with this play. Though lighthearted throughout, the final quarter takes on a somewhat more serious tone, with the titular gun passing from one character to another, some with more ominous intention for its use than others. I don’t think it counts as a spoiler to say that violence does eventually wield its ugly head, though by whom and against whom I will not reveal here. Suffice it to say, Mr. Lamb shows that there are very real consequences to such violence, which also causes the loose ends of the evening – the play and the play about the play – to collide in a very affecting confrontation between Tommy and the interior play’s director, vividly portrayed by Brandi Varnell.*

Minor quibbles aside, Ten Ways on a Gun has a lot to say about private gun ownership and a unique way of saying it, a testament to society’s ability to momentarily cede its fixation on the inconsequential and turn a studious eye on a sensitive, and highly divisive, subject matter. Moreover, Ten Ways asks the question of why – why a person, pushed to the limit of his emotions, drained of any hope, and reeling from fear of a world against him, would bend to his sickest instincts and pick up a gun to resolve his problems, foregoing any promise of a reasonable solution – will enter your mind and stay there. Mercifully, unlike in life, the blood here is fake, not real.

*Ms. Varnell is also one of Ten Ways’ producers.