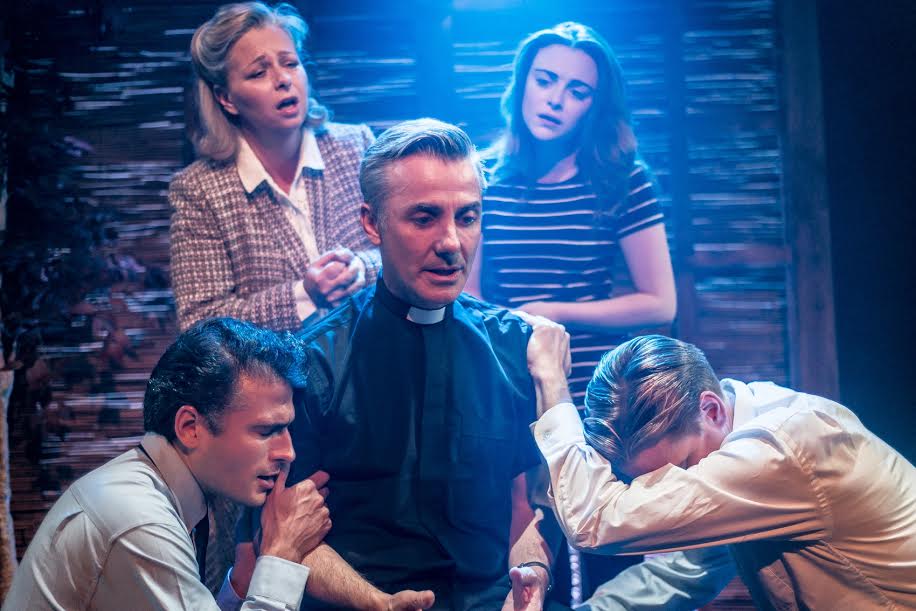 See What I Wanna See at the Jermyn Street Theatre

A very well executed production of a unique and interesting new play, See What I Wanna See brings together three stories, with no clear ending to any of them, in an effort to show the importance of perception. While this doesn’t seem very clear, it is difficult to put this musical into words.

Based on three Japanese short stories set in different time periods, the play gives a unique voice to every character that lives or explains an event through their eyes. In the first Act, we see a woman in a kimono about to murder her lover, while at the start of the second Act, the lover has a different way of explaining such events. We then fall into New York, 1951 where a rich man has been murdered and the police are trying to uncover the murderer. But such is a difficult task when the wife, the thief, the janitor and the psychic have completely different stories to tell. It makes us see what we want to see, as is the theme of the play.

The second act presents the story of a modern day priest, questioning his faith, who decides to create a fake spiritual event as a farce. He initially does this for his personal entertainment, but does not expect the anticipation to be felt by so many. He meets individuals who are marked by the prospect this event, each with a past to tell. Once again, this makes us see what each character wants us to see and draw our own conclusion to the meaning of each story. Centered on the theme of miracles, it has a more spiritual aspect to it.

The lighting and the set design wonderfully accompany Adam’s Lenson’s tremendous directing. While staying very minimal, the set features a single tree in front of bamboo panels across the small stage, reminding the audience of the Japanese inspiration of the original script. With a table and chairs in the middle, the minimal décor leaves room to fully pay attention to the various stories and, of course, the extremely talented actors. Lighting is effectively used in changes of scenes and of moods, emphasizing each character as they explain their version of the events. The transitions are very well done, allowing there to be a superb flow to the show.

All throughout the two hours, the audience genuinely understand the personal battle that each character goes through. There is a certain feeling of proximity that is difficult to achieve in larger theatres. The Jermyn Street Theatre is small and therefore does not create a strict barrier between audience and the actors. The intimacy of the venue adds to the quality of the performance. Music is well brought into each scene to either lighten the mood or emphasize the importance of a certain actor’s telling of his or her story. The musicians are subtly put to the hidden side of the stage but their professionalism does not distract the audience from the performance.

The actors each bring something to the production. While Cassie Compton’s fantastic voice and stage presence bewitches us all, it is also important to mention Sarah Ingram as both the comic relief and the wise voice of the play. Because of the different stories in each act, the play gives the audience the chance to appreciate the diverse characters. This is especially the case for Jonathan Butterell. While his role as the janitor in the first Act is well portrayed, his performance as a priest losing his faith in the second Act is remarkable.

See What I Wanna See forces the audience to create their own ending to the stories since they are not clear and nor are they fully formulated. While this is rarely seen in musicals, it is a refreshing way to experience musical theatre. It is a production that leaves more room to enjoy the quality of the acting and of the direction