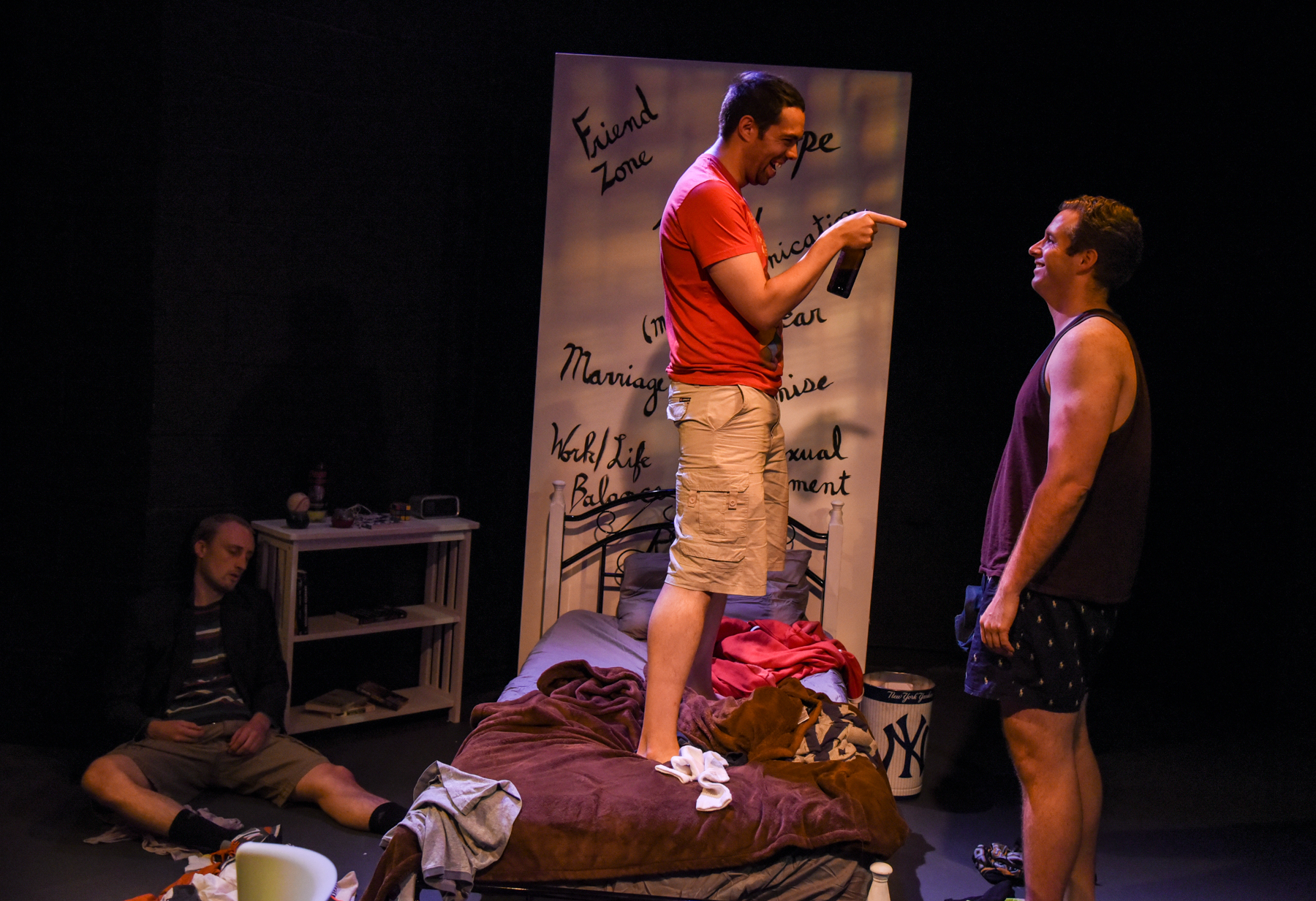 What is gained by reviving this play?

That is the first question that crosses my mind each time that I attend a revival. In some cases, a show is simply beloved and that alone warrants a revival, but, for lesser known works, a director or producer’s motivation for presenting an aging play to a modern audience merits serious consideration – without a credible anchor in the current social, political, and/or cultural environment, a play can feel dated and frustratingly irrelevant. While watching The Seeing Place Theater’s production of Boy’s Life, my frustration level steadily grew as I struggled to connect with the action and characters on stage, yet, I cannot help but feel that this was precisely the reaction that I was expected to have to the piece.

Boy’s Life was originally published in 1988 and its three protagonists are perhaps best described as unsuccessful yuppies – college educated men in their late 20’s living in the city. Wasting away their post-college days in apparently less than noteworthy jobs, Jack, Don, and Phil can best be summarized as pathetic, self-indulgent, aimless shmucks who think far too highly of themselves and the superficial lives that they lead.* They are, by no means, role models. The antithesis to a sensitive man, Jack pretends to be the alpha male of their wayward group while actually struggling with his disappointing state of his existence. Engaging in habitual drug use, fighting with his wife, ignoring his son, and hitting on women unabashedly, Jack is unable to find a sense of self in any facet of his life while also achieving a level of douchebaggery** that makes him nearly impossible to like. Phil and Don are only slightly better. Living life in a perpetual state of depression and seemingly unable to connect with women except through artificial declarations of love, Phil is somewhat more sympathetic as a character because of his social failures – that is, until he reveals himself to be a rapist. Despite feeling terrible about his actions, there is something repulsive about his willingness to recount the event to Jack as Jack chuckles in amusement and asks questions about the encounter. Don, the most respectable of the group, also struggles to engage women on any real level and, when he manages to secure a relationship with a woman, he jeopardizes that relationship by having a one-night stand. What is his motivation for infidelity? A desire to “see if he could get away with it.” Classy.

In totality, Howard Korder’s play is an utterly disenchanting case study of three young, college-educated, white males in the late 1980s and one can only hope that these three men are not actually representative of their peers.*** Korder’s play feels dated but portions of Korder’s commentary on the perceived social role of men (e.g., strong; virile; capable provider) and how that can impact a man’s perception of his role in the world and his behavior (e.g., creating feelings of inadequacy; leading to sexual violence) remain relevant. At the same time, it is hard to ignore the advances that have been made in the U.S. with respect to destroying traditional gender roles and chipping away at expected gender norms. – advances that make some of the elements of Boy’s Life almost farcical.

While the themes of Boy’s Life remain relevant, it is occasionally difficult to find modern-day relevance in this production, not because of the story, but because of the staging and time-period references. Director Erin Cronican has opted to bring the play into the 21st century in some respects, such as incorporating a runner who is listening to music through her iPod ear buds. However, at Don’s wedding, the actors dance to such hits as Iris by the Goo Goo Dolls and melodies from ABBA – music from several decades ago. Moreover, the three men sit around reminiscing about the 1970s as if they are expected to remember key occurrences during that decade. Presumably, that means Jack, Don, and Phil were born in the early 1960s, which makes sense if the play was being staged in 1988 – less so in 2015 when the “young men” would be over 40 (and apparently still behaving like immature jerks).

Regarding casting, credit is due to actor Brandon Walker for his thoroughly believable portrayal of the tactless druggy, Jack. The Seeing Place specializes in a sort of “in the moment” acting style that relies less on advance staging and more on organic interaction between the actors. Walker excels at this style of acting and seems at ease with the freedom such a staging provides him. Olivia Baseman is similarly successful at crafting an attention grabbing, if eccentric, character as Don’s oddly alluring one night stand. Not everyone is quite as on point though. Alex Witherow never quite develops the character of “Don” beyond the boring platitudes that he speaks, and Logan Keeler’s depressed “Phil” is similarly one-note. Unfortunately, neither the actors nor the plot is aided much by the set design, which is composed mainly of several large white canvases adorned with buzz words that are commonly associated with gender stereotypes. This attempt to stimulate contemplation about social roles is undermined by the forceful way that the message is delivered – sometimes, it is far better to let the audience members derive the themes of a show by themselves.

Ultimately, Boy’s Life, while somewhat dated, discusses socially-constructed gender roles in a meaningful way, and the ensemble in The Seeing Place’s production of this play nicely explores those themes in a very organic way, resulting in a thought-provoking, if occasionally awkward and underdeveloped, production.

***Or I have lost all faith in Generation X because this trio is a pile of cash and one murder away from American Psycho territory.