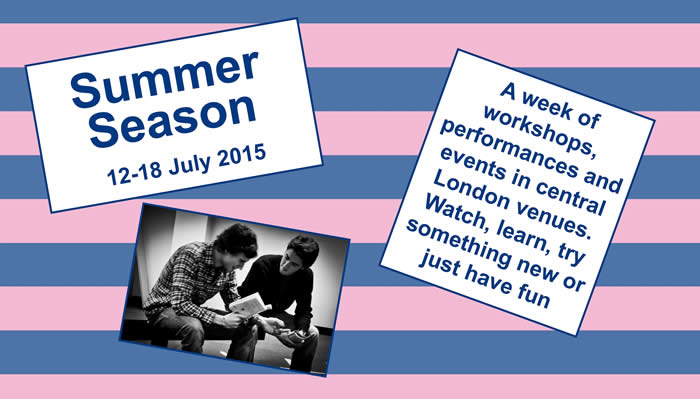 As part of their eclectic ‘Summer Season’ week, Sedos has put on a series of scenes from six American plays, each with distinctive moods and dynamics. I say dynamics because that it was most apparent in the selection we were given by the director Alex Magliaro. Despite the almost century-wide gap between the plays’ various authors, the drama of them is derived from that very basic idea which is taught to all drama students: shifting status. Each play had power shifts and when they were atomised in such a way—one scene from each play from their first act, then another of each from their second—those shifts became so much more apparent.

It is prudent to mention that this piece, and the entire Summer Season, was experimental in nature and had a short rehearsal process. What I did not realise until the very end of Americana, although I did do it subconsciously, is that these plays were offered to us, in part, to get an idea for what audiences want to see in Sedos’ 2016 lineup. After the performance I was handed a ticket and asked to put it in a cup corresponding to the play I was most interested in. With that understood I will explore the individual plays.

The first, Our Town, was the most difficult to break down into just two scenes. When in full, the play takes the smallness of Grover’s Corners to a cosmic significance; although the director/God-figure did this in the scenes presented, on their own they do not quite create the same effect. The stage’s minimalism helped the candour of the actors, yet the intimate action of George and Emily in the second scene would have worked better if it were to have been brought more downstage.

The Bus Stop appealed the least, which was almost completely down to the writing rather than the actors who handled the content competently. The conflict arising from the juggling of power between the sheriff, the cowboy and his girlfriend was weak with unsubstantial dialogue. This is not to say that the director did not use the material well: the set painted the status of its characters colourfully with its layout of tables and benches.

Sweet Bird of Youth took two very hard scenes, scenes which, unlike what came before in the night, had no climaxes. Since nearly all the action was downstage in the center with sparse blocking, all the audience had to go on was the performances themselves. While the performances were handled well by both actors, the backstories of both were a lot to take on, especially without prior scenes to reveal them. There was also a welcome decision with the bed being constructed out of benches but with a hole in the middle, a hollow center for both of the characters.

The Odd Couple, conversely, was the easiest to put on. The lines spoke for themselves, although the actors did have impressive comic delivery. Again, the dynamics of the piece were handled well: status went in constantly different directions as shown by, primarily, the characters’ physicality. The staging was done well, particularly with the first scene where the poker table was placed downstage right in order to make Felix’s entrance all the more pathetic and isolated coming from stage left. Both scenes had the essential quality of the piece, humour, but I feel as though, unlike, the others, it lacked a resonance beyond such humor.

The fifth play, Steel Magnolias, shocked me with its rawness. This was helped by the actors facing the audience downstage with no barrier other than an imagined hairdresser’s mirror. The actors conveyed the sadness that undercut the joy of the initial wedding scene and then altered those performances to become ones of pity in the subsequent scene. The fact that the seated actors had to remain rigid in order for their hair to worked on meant that the first scene had a subtle stillness to it that all of the other scenes lacked.

As I understand it, the two scenes chosen from the 2002’s Take Me Out are not ones which form the central action of the play, yet the drama of both still carried as much weight. It was moving how the simplicity of set helped arouse such complexity from the scenes’ various dilemmas. It showed that a table could easily represent an office, or that a bare stage could simply be a baseball field. In fact, the scenes chosen were better for having not been part of the play’s central action. It gave me a taste for more, and alas this is play I would probably want to see in full.

As a general note, the actors were highly capable of switching between the roles and, more significantly, showing their shifts in status and mood within the roles themselves. The only detractions, and of course I understand the limited rehearsal time, were the accents that sometimes came unstuck in the more rapid passages of speech and some of the gestures which needed to be more defined. Other than that, Americana was a promise of rich, fruitful drama and showed the Sedos has the skill to put on just about whatever it wants.