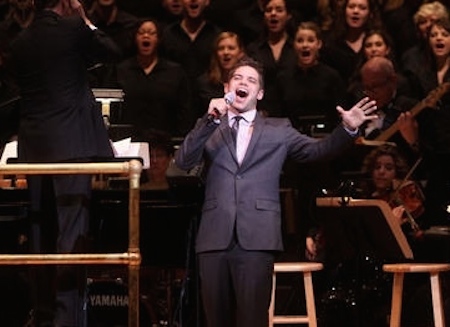 TSO Pops: The Wizard & I

Performing with a symphony orchestra is a tricky thing, especially for a musical theatre performer. On a stage that likely has better acoustics than your usual proscenium, in a space traditionally occupied by concert cellists and world-class operatic sopranos, without the help of your costume or your co-stars, the story or the special effects, you really have but one prong of your triple threat to lean on- you have to Sing. All great musical theatre performers can sing but many of them can sing while acting their hearts out or doing amazing choreography, which are wildly amazing skills that the aforementioned world-class operatic soprano just does not have. But with the symphony, you just have to sing (bonus points for charisma) and you therefore have to sing better than you ever really have had to sing before. Such a setting separates the flawless from the fading really really easily and when the music in question is as familiar and stealthily demanding as Stephen Schwartz, every flaw stands out just that much more clearly.

Lively conductor Steven Reineke has assembled a group of four Broadway singers for this incarnation of The Wizard & I: The Musical Journey of Stephen Schwartz, performing alongside the Toronto Symphony Orchestra and Amabile Choirs of London. The foursome is slightly altered from previous versions of this concert (New York got Norm Lewis as their baritone; stupid New York always gets the best stuff) but the format seems to always be the same- a loosely chronological trip through the composer’s work (I say “loosely” because the brilliant and underrated Children of Eden opens the show despite being written well after Pippin and Godspell). The chatter between songs is a combination of dull production history (far too many dates) and a few fun anecdotes (Julia Murney tells a fun story about the standard procedure for when the “Defying Gravity” flight rig doesn’t work) with not enough story information or discussion of themes to give the evening any real structure beyond vague chronology but Schwartz’s incredible work speaks for itself and how transcendent or underwhelming the evening is ultimately just comes down to the singers.

On this front, the Toronto version of the concert bats about .800. Christopher Johnstone and Carrie Manolakos are both fantastic, knocking Pippin‘s “Magic to Do” and Wicked‘s “The Wizard and I” respectively out of the park. Murney brings the average way down with vocals that are an unlikeable combination of shaky and showy. Her flaws wouldn’t be so glaring if the concert weren’t constructed with the clear premise that she is the powerhouse of the group- she’s given the opening notes (the melismatic “be-e-e-e-yond” of “Spark of Creation”, which she warbles through), the number generally considered Schwartz’s toughest (“Meadowlark” from The Baker’s Wife) and the final solo of the night (there is some business where we pretend the two female vocalists are flipping a coin over Elphaba’s two big pieces but there was never a real chance anyone but Murney would get to sing “Defying Gravity”; of course this meant that “The Wizard and I” overshadowed the more famous song).

But you’ll notice that .800 is not an average that makes sense with only four players; it’s because I afforded bonus points for Jeremy freaking Jordan. Are you kidding me with this guy? Occasionally I start to question myself a little- am I building him up in my head because he’s a rare Broadway performer I’ve gotten to see live in their OBC (Newsies)? Maybe he’s not as good as I remember (I’m told some people didn’t love him as much as I did in The Last Five Years). Is it possible that subconsciously I’m giving him extra points for being so handsome and charming and other things that make the boy-crazy among us give people extra points? Just to be sure, I closed my eyes when I knew his first solo was up next- Children of Eden‘s “Lost in the Wilderness”, my favourite male song in the entire Schwartz canon (Jordan’s tenor range meant he was assigned all my favourites; I tried not to give him extra points for that either). Nope; the magic is real, even more irrefutable because it gets stronger live (the key change in “Santa Fe” on the Newsies OBC recording is probably the closest to the full magic but you haven’t really heard Jeremy Jordan until you’ve heard Jeremy Jordan live). One of the key marks of a truly killer musical theatre belter is that their top notes don’t feel any more precarious than their middle ones. With Murney, you can feel her pushing to show you how high she can go, the unspoken text seeming to be “look what note I can hit!”. With Jordan (and the other two, but especially Jordan) those notes are just there, big and breathtaking and seemingly effortless, allowing the unspoken text to be the subtext of the character’s headspace, the real artistic reason why thoughtful composers (of which Schwartz is definitely one) decided to put that note there.

The Wizard & I isn’t a perfect showcase. There are some songs included that shouldn’t be (cheesy found-text anti-bullying anthem “Testimony”) and some important elements that are missing (a proper Glinda showcase; more thematic exposition) but the songs of Stephen Schwartz are the sort of heart-capturing, foot-tapping, spirit-stirring stuff that can shine through even the most awkward arrangement or distractingly over-zealous choir performance. What they do need, though, is a dependable vocal from a musical theatre star powerful enough to stand in front of a symphony- without their costume, without their co-stars, without their story or their special effects- and just Sing it. On most counts, that’s what Reineke delivered.