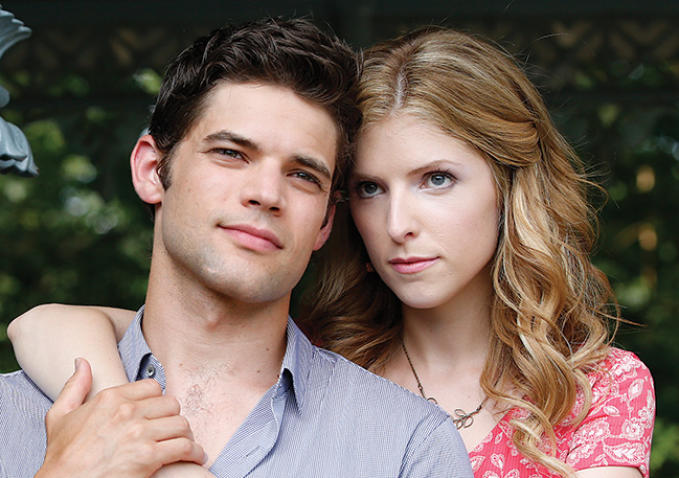 Director Richard LaGravenese did right by Jason Robert Brown and his off-Broadway masterpiece The Last Five Years. From casting to small script additions to keeping Hollywood out of it and presenting the original songs and structure fully in tact, LaGravenese made a lot of smart calls that make The Last Five Years a beautiful film.

It’s therefore somewhat annoying to have to say that my least favourite thing about the film is his actual direction. It’s too handheld (so much wobbling and spinning!), often too close-up, and the few particularly impressive shots like the tracking in “Nobody Needs to Know” are overshadowed by some seriously questionable angles (I like the steady, overhead shot of a defeated Jamie as that song ends but couldn’t we have come to it a few bars later when he’d finished his final “allllllright” so we’re not staring down his very exposed throat?). There’s also a moment where the extras in “Moving Too Fast” inexplicably realize they’re in a musical, misunderstand what Kind of musical they’re in, and start dancing (it seems less out of place when they do that in 500 Days of Summer, which is not a musical at all).

The score is sung live, a deal-breaker directorial decision since a musical this intimate with this acting-intensive a score would have been completely wasted if not sung live, but the few scenes that are blocked in a way that forces ADR instead of live singing completely pull you out of the intimate experience. Oddly, one of these scenes (Cathy’s roadtrip solo “I Can Do Better Than That” which is usually one of my favourites but is definitely among the film’s weakest) was released as the teaser scene for the film and thus my Facebook feed has been in a Panic for the last few days. Never fear, the film as a whole is drastically better than its weakest moments suggest. I was wary after seeing the teaser scene and remained wary throughout Anna Kendrick’s catatonic opening number (I like catatonic as a choice for that scene in theory but it makes the first few minutes a slow-go) but then the sun struck through the almost grayscale bleakness of the post-breakup opener, Jeremy Jordan tumbled onto screen wrapped up in a far-more-lively Kendrick and muttered, giddily guilty, “I’m breaking my mother’s heart”. And I knew this movie would work.

The casting of Jeremy Jordan as Jamie was met in early 2013 with a relieved sigh and giddy anticipation from the theatre community and its rabid fans. We all like Anna Kendrick (everybody likes Anna Kendrick) and were pretty confident that she would hit the character and emotional elements of Cathy out of the park, but we all also knew that the film actress (even with her childhood Broadway background) was a bit of a risk in one of the toughest vocal roles around (one she freely admits she could never sing 8 times a week). Jeremy Jordan, however, was an obvious slam-dunk, despite his comparative lack of mainstream fame. Following in the massive footsteps of my all-time favourite song and dance man Norbert Leo Butz, Broadway’s current beloved it-boy Jordan has that powerful tenor with a slight edge of unpredictability that most perfectly suits Jamie’s material (the ease with which he soars straight up to Jamie’s wild top notes is just plain sexy). The dangerous charm, natural comedy and sweet enthusiasm Jordan brings to the role are also key in making the allure of the character powerful far beyond his genius. He’s by far the funniest Jamie I’ve ever seen with plenty of improvised dialogue and unexpected line deliveries to delight fans who know the original cast recording too well. I’m very attached to the theme of Jamie’s talent being central to Cathy’s attraction to him (and to her frustration with him- illustrated beautifully in “A Part of That”, one of the numbers that is particularly effective in the film version) so I’m going to make the completely absurd argument that Jordan is actually too good looking for the role. But now that I’ve made that argument, I’m not going to dwell on it; Jordan gets right to the heart of who Jamie is and the perfection of his jawline is not his fault (nor can I think of anyone less ridiculously hot who could have played the role better). Because he’s working with an attraction factor of 10 even before his book hits the bestseller list, Jordan and LaGravenese smartly explore Jamie’s darker side a bit more than most stage versions. His tense wandering eye number “A Miracle Would Happen” is more debaucherous than usual with copious drinking and a verse set in a strip club; the “I’ll be there soon Cathy” refrain that tempers that song’s foreboding interestingly downplays the ‘I’ll be there for you’ element in favour of the ‘I’m not there now’ subtext. Similarly, Jordan’s “If I Didn’t Believe in You” reveals more aggression than most Jamies put into the melancholy ballad and it all comes to a head when what is usually a specific affair with his editor is revealed to be preceded by a series of meaningless sexual encounters (one with the Random House receptionist played by Jordan’s real life wife Ashley Spencer). I have a tendency to favour Jamie over Cathy in the first place (read into that what you will) so I was very glad to see Jordan tear him down a bit, evening out the extra charm he brings to the role and founding the anger and resentment of Kendrick’s Cathy in more truth than jealousy.

For her part, Kendrick demonstrates the not-to-be-underestimated value of casting a true film actress. LaGravenese made the practical decision to have the characters deliver the songs to each other rather than using the stage version’s soliloquy format, meaning that both Jordan and Kendrick have to spend a potentially awkward amount of time reacting non-verbally. Kendrick is particularly special in this regard, the best example coming in the film’s most effective scene- “The Schmuel Song”. As the Christmas vignette begins, Cathy enters exasperated past the point of reconciliation. Jamie, in all his wisdom, attempts to cheer her up by reciting a story he wrote for her (which concludes with my favourite verse of the show and the perfect line “have I mentioned today how lucky I am to be in love with you?” oy). Jordan is at his comical best here as he improvises his way around the silly story of the Tailor of Klimovich (my favourite line addition: “you ready for this?” before he starts his Schmuel impression) but it’s Kendrick (whose character doesn’t even appear in this scene on stage) who really struck me, conveying a whole relationship’s worth of detail in just a few reaction shots and improvised lines (my favourites: “it was pretty long” and “I’m supposed to be Schmuel in this?! Not the girl from Odessa?”). She moves from bitter frustration to adorable optimism, along the way revealing how effortlessly Jamie annoys her but also his unparalleled ability to make her happy (again, with ostensibly no lines). She’s also extremely funny in her own right, delivering her comically woeful showstopper “Summer in Ohio” with such pitch-perfect irony (forgive the pun) that it earned applause from the audience at its second TIFF screening. Her vocals aren’t on par with Jordan’s, but they’re far more than passable and I wouldn’t sacrifice the emotional honesty the actress brings to “See, I’m Smiling” for the most perfectly belted D# on Broadway (keeping in mind that her vocals are at least pretty good; if they were bad I would absolutely sacrifice her acting for a decent voice).

I saw The Last Five Years with a hyper-specific audience. They applauded the perfectly chosen Jason Robert Brown cameo (as the hateful pianist at Cathy’s audition) and, at the Q&A after the screening, grilled the director about script changes even after Jordan revealed that a total of 20 words had been altered since JRB’s own edits for the 2013 Off-Broadway revival (favourite Q&A Anecdote: a PG-13 film can only have one F word so LaGravenese asked the composer which one he wanted to keep and JRB replied “I want Fucking Birthday”, a perfect choice; the rest became “friggin”, “stupid” or other such things). This was the audience who has been waiting for this movie since they first fell in love with Brown’s game-changing score (very few of L5Y’s fans have actually seen a major production, it’s all about Butz and Sherie Rene Scott on that original recording). When the movie moves beyond its core audience with its newly acquired Weinstein distribution in February, there’s a distinct possibility that mainstream viewers won’t know what to do with a musical that adheres to very few of their preconceptions about what a musical should be (“but why are there no jazz hands?!”), not to mention the potentially very confusing forwards/backwards structure that the film expects the audience to follow with very little denotation of time and space. But The Last 5 Years should find its way to the sort of indie drama fans who’ve been a bit starved this year so far. The slightly over-zealous new “bigger canvas” orchestrations aside, this is an intimate, honest movie that just happens to be sung-through. It’s a little weirdly shot and there’s that one stupid scene where they have ADR sing-sex in a car but The Last Five Years is a movie that hopefully will bring musical-phobic film fans around to the dramatic (and comedic) possibilities of the medium. At the very least, we happy few JRB devotees will have a L5Y we can watch forever.