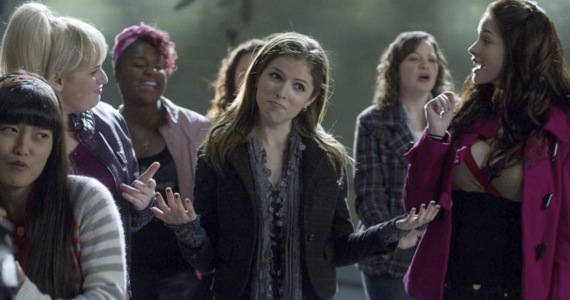 Here’s the thing, I like Pitch Perfect. I’ve seen it twice now and enjoyed it both times, because it’s exactly the movie I’m supposed to like. I mean, university a capella? Hilarious, and also ripe for all sorts of character fun and honest-to-god stories about competition and friendship and belonging (there are people whose job it is to make “bop bop bop” sounds in the background while someone else sings the solo- talk about a team sport). Pitch Perfect should be pretty close to, well, pitch perfect- and in a lot of ways it is- but the script is so predictable that I almost revolted on first watch. It got better the second time around, when I was more able to enjoy the ride without caring where it was going, but the chink still exists in the armour of what should be a great film.

The cast couldn’t be better, led by the always great Anna Kendrick with solid turns by MyTV favourite Brittany Snow (American Dreams, Hairspray) and breakout star Rebel Wilson (whose ‘Fat Amy’ offers up some instant classic one-liners like “even though some of you are very thin, I know that you all have fat hearts”). The whole cast can actually sing without having to be over-processed, which right there gives Pitch Perfect a huge leg up on most Hollywood projects about performers. Ben Platt is sweet and weird as Benji, the sweet and weird kid who isn’t let into the “cool” all-male group The Treblemakers because he’s too sweet and weird, and Adam DeVine is a ridiculous cartoon villain as the loser-as-leader Treblemakers frontman, which is exactly what he should be (fun details are thrown in that make him even funnier on a second watch, like his background conversation about how Sisqo gave the best live show he ever saw- “you know ‘Thong Song’ wasn’t his only hit”). Snow plays Chloe, the sweetheart second-in-command of The Barden Bellas with Anna Camp’s Aubrey as her tyrant captain (a character that has her moments, but is entirely too reliant on prop vomit as both a comedic and humanizing devise). The rest of the Bellas are an assortment of crazies from the sex-crazed dumb one (who falls flat a bit) to the softspoken semi-psychopath (an audience favourite) to major pop songwriter Ester Dean who is a superstar of the soundtrack but the victim of boring lesbian jokes in the film itself. Back over with the Treblemakers, Donald (the scene-stealing Utkarsh Ambudkar) is their only developed minor member, and he’s terribly amusing in a nerd-who-raps Kevin G kind of way.

The film’s leading man is Skyler Astin as Jesse, a character well written (in a dialogue sense) and well played enough to easily get past the fact that he only really has two defining elements: he’s really into movie soundtracks and scores (and, subsequently, endings), and he’s kind and protective towards his crazy roommate Benji, never once acting like he’s too cool for the kid (which, let’s face it, most of us would have). The simplicity in that character points to the problem with the movie- it’s just too easy. The plot plays out like a screenwriting 101 class- Logline: The Bellas want to win nationals. Protagonist: Beca (Kendrick), an outsider who comes in and changes the Bellas for the better. Themes: acceptance, courage to go against the norm. Story Arc: inciting moment, rising action, climax, resolution that anyone with half a sense of storytelling could see from the first shot. Everything from Benji’s subplot to the romance to the setlists is on a trajectory so flat and straight that Mr. Magoo could navigate it.

The great John Benjamin Hickey does what he can with the tiny, ridiculous role of Beca’s dad who lazily serves as the source of all her Big Life Problems and crappy attitude. He’s a professor and is insisting that she get a proper (free!) education before he’ll help her move to LA and get a job at a record company. There’s an unoriginal backstory about a divorce and someone Beca likes to call “the stepmonster” (you can tell she’s cool because she uses awesome wordplay like that!) but it only really gets addressed when Beca needs an excuse to a) be an ungrateful, unreasonable and unkind brat towards her Clearly well-intentioned father and b) push away anyone who might care about her and generally treat others like they’re useless and always in the wrong, no matter what. You’re telling a story about an 18-year-old, I get it, some of the mistreatment of dad stuff goes with the territory even if it is Way over the top here (though it is odd to see Kendrick play, considering she’s made a living thus far on twentysomethings who are wise and successful beyond their years). I even get the mean spirited and self important way she looks down on the Bellas immediately- hey, judgemental’s my bag too, Beca, it’s fine. But I have to draw the line at Jesse.

On paper and, especially, as played by Astin, Jesse is the definition of wonderful. He’s kind and sweet and smart but he’s also cute, cool and carelessly funny enough that there’s no reason for Beca to pull that ridiculous “he’s too nice, he’s not exciting” crap that girls do so often. Boy is perfect, And he can sing. Really sing. Like, original cast of Spring Awakening sing. But he spends the entire movie getting smirked at, and ignored and then outright yelled at by Beca, to the point where my friend leaned over and asked “why does he like her?”. And she was right. Beca’s smart, I guess, but she doesn’t give any of the other characters a real reason to trust and love her as much as they do. They follow her, not because she deserves it but because she’s the lead character and the movie wouldn’t work if they didn’t- that’s the entire reason. The only character Beca is particularly nice to is her hateful roommate Kimmy Jin (a deadpan Jinhee Joung), my favourite character in the movie (apart, obviously, from Jesse, because I’m in love with him if you couldn’t tell). She hates Beca arbitrarily but it’s awesome because I hate Beca too (despite my love of Kendrick) and also because Beca gets funnier when she’s not in power, and the only time that happens is when she’s in a room with Kimmy Jin and is being hardcore hated.

The a capella competitions in the film are hosted by producer Elizabeth Banks and John Michael Higgins, spouting joke after joke and hitting their intended laugh target maybe 13% of the time. You can tell, with the inclusion of those characters and their shock-comedy style, Beca’s hipster hatred of everything except DJing, and absurd visuals like projectile vomiting, that the filmmakers behind Pitch Perfect were doing everything they could to not be labeled a product for the Glee generation. They wanted to be a cool movie about something that people don’t think is cool. And they almost succeeded. It’s a really fun movie with a particularly fantastic soundtrack, but is it actually a good movie that is tonally consistent and structurally tight with fully developed characters? Sadly, not even close.