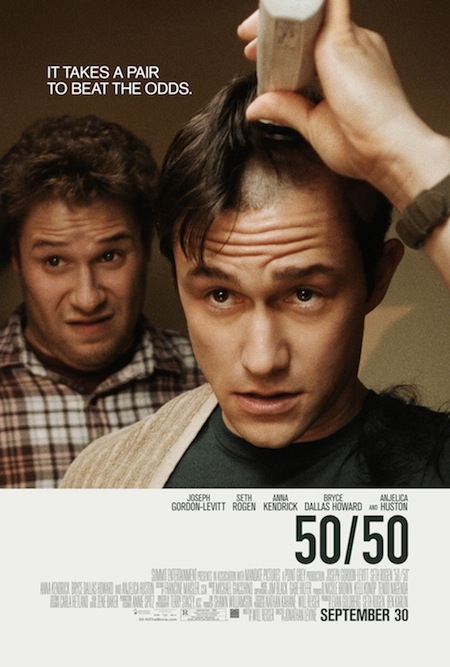 It is amazing to me that the release and theatrical run of 50/50 came and went with very minimal hoopla. The film is everything Hollywood commentators love- clever and unexpected but somehow in adherence with current tonal trends, well cast, smartly written, genre subversive, thematically daring, backed by big names and based on a true story. 50/50 should have knocked Hollywood off its feet. I have no idea why it didn’t, because I think it’s a truly wonderful film.

I don’t often find Seth Rogen’s brand of comedy funny, but I laughed out loud through much of 50/50. Unlike so many broad, bro-centric comedies, there is absolutely nothing lazy about 50/50. The jokes are clever, insightful and honest as literally only Will Reiser could have written them. The story of a healthy 27-year-old who is diagnosed with spinal cancer and given a 50% chance of survival was based on Reiser’s own experiences, a story that shouldn’t be funny but, like absolutely everything in life, when looked at from the right angle, somehow is. The bogus, unfair, utter randomness of cancer has a certain absurdism to it that leaves you laughing when you’ve run out of tears, anger and denial. And in a year like 2011, when everyone I know seems to be under personal attack from the unbearably widespread disease, there seems to be no other reaction instincts left. So Reiser makes us smile and reminds us of what’s funny and sentimental and worth it in all the crap that randomly lands on the heads of those like himself, like his character Adam, like my friends Jane and Andree and Les.

Adam’s story is told with the lightest of hands and the greatest of nerve. It dares to cross lines of sensitivity and poke gingerly at our deepest-seated anxieties and greatest failings. But it’s not one of those uncomfortable-but-ultimately-trasformative pieces, 50/50 is legitimately enjoyable, even when it propels you into sobs of catharsis. The laughter at my showing was never riotous, the audience seemed somehow nervous at the honesty in Reiser’s words, but to me that scared-of-the-joke effect the film seemed to have on its audience made it all the more fascinating. Reiser’s cancer may have given him heavy material to work with but, as is the case with Adam, it couldn’t change who he is, and who Will Reiser is is a comedy writer. A closely observant, brimmingly intelligent, damn funny comedy writer. And 50/50 is his movie.

Marketed as a Rogen-starring buddy comedy, 50/50 is no such thing. It’s a comedy, to be sure, and it plays host to a brilliantly drawn and excellently played central friendship, but it’s also a complex and exhaustingly true family story, a beautifully delicate romance, and a remarkably lonely character portrait.

Seth Rogen’s true-to-life turn as Adam’s best friend Kyle (a bumbling good guy both desperate to help and quick to realize how incapable he is of really helping) is the best I’ve ever seen him. Playing a version of himself, Rogen has a self-effacing charm and refreshing candour as he tries and fails to make life a little easier on Adam. Arguably the film’s most important relationship is also its most perfectly understated, with no big speeches or impassioned declarations of loyalty to make the point of their closeness. Rather, a quiet scene in which Adam finds a guide to dealing with cancer in Kyle’s bathroom says everything that needs to be said. It’s comically real (the guy was reading it on the toilet!) yet undeniably affecting, clinching exactly what kind of friend Kyle is with a scene in which Rogen never even appears.

The family drama aspects of the film are given great life by the legendary Anjelica Huston, who plays Adam’s mother with the exact sort of smothering desperation that makes you feel for her and him in simultaneous and opposing ways. An only child with a father afflicted with Alzheimer’s, Adam is his mother’s whole life, something she clings to even more unbearably when he tells her he’s sick. Like Kyle, all Diane wants is to help and, like Kyle, her own failure to react with inhuman perfection makes it even harder for Adam to deal. She’s aggravatingly caring to the point of becoming surreptitiously needy. That’s the thing about unconditional love; when you’re sick and need someone to lean on, the only people who are there are people whose loved one is sick and need someone to lean on.

In 50/50 there isn’t a soul who doesn’t mean to do the right thing, it’s a mark of Reiser’s impeccably honest character writing that none of them are able to completely measure up. That includes Adam’s girlfriend Rachael (Bryce Dallas Howard, who needs to get herself a nice, sweet romantic comedy role after a series of antagonists this summer). Rachael’s still new to Adam’s life and given a fair out when he tells her he’s sick, an out she should but doesn’t take, understandably so. Rachael, the closest thing to a villain 50/50 has, finds herself trapped in a catch-22 of impossible circumstances: she’ll feel guilty if she leaves but she’s unhappy if she stays. And as we do when we don’t know what to do, Rachael does nothing, the absolute worst thing to do. She goes along with the relationship as best she knows how, becoming an insubstantial support system for Adam, stringing him along and eventually cheating, presumably out of sheer “fuck, I can’t do this!” depression. Kyle’s triumphant “I told you so” outing of Rachael’s failings is more melancholy than that scene in any other movie ever could have been.

Rachael’s counterbalance appears in the wonderfully neurotic form of Anna Kendrick’s Katherine, a counsellor-in-training who’s assigned Adam as her third-ever patient. An outsider who finds her way to Adam through his illness, Katherine takes an opposite but equally intriguing journey in contrast to Rachael. Kendrick’s is a fantastically smart presence, a great mix of practiced decorum and undeniable warmth. She’s at her best here as she systematically attempts to sooth Joseph Gordon-Levitt’s Adam using book-taught techniques her quietly savvy patient sees right through. The relationship between her and Adam starts off with just the right amount of clinical distance, warming as he guides her through his sickness (as he seems to be doing with everyone). A charming motif wherein she attempts to comfort him by touching his arm, because she was taught that it can be soothing, plays out with a subtle sweetness as Katherine moves away from attempting to help Adam therapeutically and towards actually being there for him. The move might not be within the ethical guidelines of her training, but for the purposes of the movie, it’s a wonderfully told slow-moving romance.

The only people in Adam’s life who ever know what to say are two fellow patients he meets during chemo, Alan and Mitch (played by Philip Baker Hall and Matt Frewer, respectively). One cantankerous and one serene, the two older men are the ones who teach Adam how to survive, by just keeping going. They’re wonderfully moving and grounding presences in a film full of complex and spiraling characters desperately trying to adjust to the new. Alan and Mitch have settled in to the crap hand they’ve been dealt; they’re done their processing, now they’re working on the dealing, making their guidance the key to Adam figuring out how to be okay.

As for Adam himself, he’s a character drawn so impeccably clearly that we learn who he is from his film-opening morning jog- he stops at the street light when other runners race right through; he wears the exact right gear for his activity and the weather; he’s out for a morning jog for goodness sake, that’s something right there; he also rubs his back where a pain nags at his spine. With a dry wit and a boyish charm, Adam is instantly endearing while still self-deprecatingly flawed. And Reiser’s self-reflective creation is all the more wonderful in the hands of the ever-emotive Gordon-Levitt, who plays Adam as both tragic and sweet with the brightest smile in Hollywood and a heartbreaking melancholy in his eyes. His journey through the emotional and physical exhaustion of diagnosis, chemo, surgery and recovery is mesmerizing, while Gordon-Levitt never fails to play the gracenotes of Adam’s small, hopeful moments. For an actor of Gordon-Levitt’s calibre, with his unique mix of playfulness and soulfulness, a role like Adam is one in a million. But then again, if you ask me, 50/50 as a whole is every bit as special.