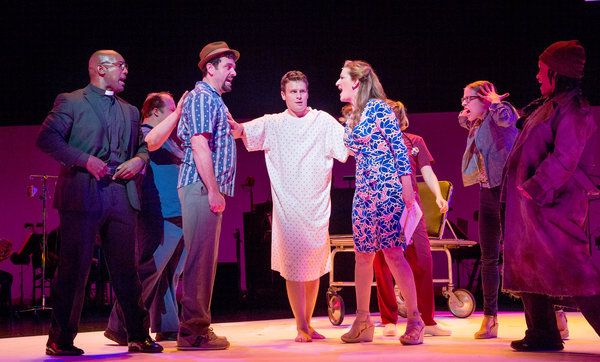 Heart and Music: A New Brain

What is your morning jam? You know what I mean. Your go to song when you are heading to work, the song you blast while getting ready for the day, or the song you set as your alarm because it is impossible to hate (or, worse, sleep through). Periods of my life are inextricably linked to my morning song, which often reflects whatever I am dealing with at the time. Unsurprisingly, many of those songs have been from musicals.* Shortly after moving New York City – after finding myself homeless in a city of strangers courtesy of Hurricane Sandy, unexpectedly ill, and in search of a new project to turn into a passion – I discovered the song “Heart and Music” from the off-Broadway musical A New Brain. A perfect combination of melody and lyrics that beautifully capture the interplay in life between grim moments of stark realism and uplifting moments of renewed purpose, “Heart and Music” was my morning anthem for a solid month. So, when New York City Center Encores! Off-Center revived A New Brain for four days in June, I had to check it out.

It turns out that A New Brain tells the tale of a young, struggling musician, Gordon Michael Schwinn (portrayed by Jonathan Groff) – a New Yorker who writes music for a children’s show starring Mr. Bungee (Dan Fogler), an incredibly annoying frog. One day, while attempting to meet a deadline, Schwinn collapses at his piano and is taken to the hospital where he discovers that he has an arteriovenous malformation and needs to undergo a dangerous craniotomy. While in the hospital, Schwinn is comforted by his well-meaning, if somewhat overbearing, Jewish mother (Ana Gasteyer), his seafaring boyfriend Roger (Aaron Lazar), and a team of nurses, doctors, and clergy. Schwinn is overwhelmed not only by his condition and the possibility of his death, but also by his desire to write a memorable musical composition before he leaves the earth – an artistic creation for which he will be remembered. Unfortunately, as Schwinn discovers, creative inspiration cannot be forced out by sheer necessity. He needs time to write such a composition, and time is something he may not have.

A New Brain is a dark dramedy with heart – a deeply personal work for writer and composer, William Finn, who based the musical on his own near death experience. The result is a striking, endearing, humorous, and heartbreaking musical that, despite a few clunky numbers and weak plot points, is profoundly enjoyable. In addition to “Heart and Music,” other memorable numbers like “Gordo’s Law of Genetics,” “And They’re Off,” “Change,” and “The Music Still Plays On” are terrific musical moments that build character and plot. Ending the musical on a powerful high note is the stirring “I Feel So Much Spring.” Anyone who enjoys William Finn’s work in The 25th Annual Putnam County Spelling Bee will likely appreciate Finn’s similarly distinctive work in A New Brain.

Given the limited run of this production, the staging was quite extraordinary and the cast incredible. Which brings me to Jonathan Groff – one of the most genuine and enjoyable male leads in the Broadway community. Groff was last seen playing King George in the downtown production of Hamilton, but he is perhaps best known for originating the role of Melchior in Spring Awakening. I caught Groff in Hamilton earlier this year and his performance was uproariously perfect, so I had high expectations going into A New Brain. He met them all. Groff’s impeccable comedic timing allowed serious sequences to seamlessly transition into absurd musical moments, yet he also beautifully captured Schwinn’s vulnerability, fear, and frustration. However, Groff was not the only casting highlight. Most people recognize Ana Gasteyer from her six-year gig on Saturday Night Live, but Gasteyer has an impressive number of theatre credits as well and is a terrific vocalist. She gave a rich and nuanced performance as Schwinn’s mother, and her rendition of the eleventh hour ballad “The Music Still Plays On” brought down the house. The entire talented ensemble performed admirably on the starkly decorated set (despite a few dropped lines that required one actor to stop the show and ask for cues – a forgivable transgression given the short run of the production).

City Center’s Encores! Off-Center program gives audiences an opportunity to revisit long closed musicals that might not otherwise find a renewed life on a major New York stage while also introducing new audiences to terrific scores and stories, like those in A New Brain. Finn’s tale of professional discontent and personal struggle, turned life renewal is an easy one to identify with, and, with a fun and memorable score, A New Brain is a show that has both heart and music.

* Studying for the LSAT? “Chip on My Shoulder” from Legally Blonde the Musical. 4th grader preparing to save the world? “Do You Hear the People Sing?” from Les Miserables. You get the picture.