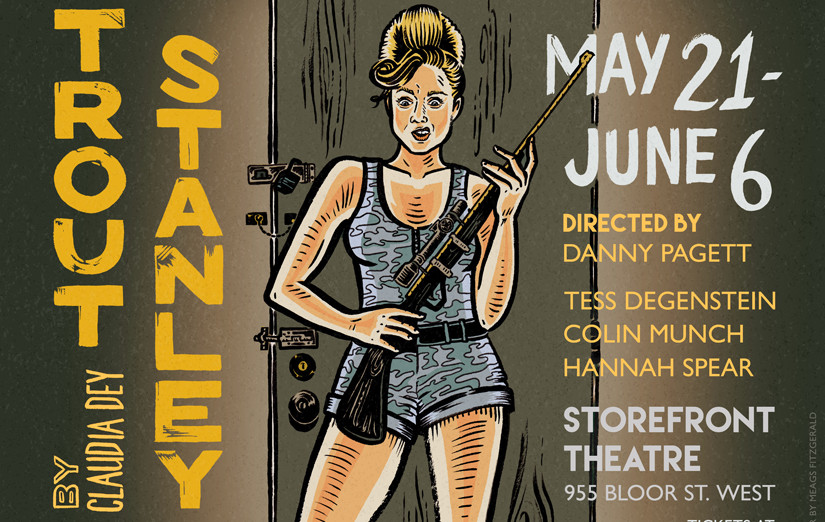 The latest indie company to take the stage at the Storefront Theatre is the excellently named Severely Jazzed, headed by improvisers Tess Degenstein and Hannah Spear.

We spoke to Tess and Hannah about their inaugural production Trout Stanley which hits Bloor West this Thursday.

Tell us about Severely Jazzed Productions and how the company got started.
Hannah Spear: The seed for Severely Jazzed was planted in 2009, when we [Hannah Spear and Tess Degenstein] started improvising together with Rapid Fire Theatre in Edmonton, Alberta- then under the moniker The Navy. In 2010 we moved to Toronto and found our improv home at the Bad Dog Theatre, run by the incredible Julie Dumais.

Tess Degenstein: Inspired by ADs like Julie Dumais and [Theatre Smash’s] Ashlie Corcoran, duos like The Templeton Philharmonic, as well as by an incredible surge of indie theatre in the city, we’ve been hungry to branch out and produce our own work. As we’ve both been fortunate enough to have careers as actors separately- often travelling with work for months at a time- it took a few years for our company to finally launch. But we are so thrilled (severely jazzed, in fact!) to be launching now with our inaugural production: Claudia Dey’s incredible Trout Stanley.

H: We are drawn to the offbeat, and wanted to give ourselves a name that reflected this. We went to the core of the feeling that we get when we work together. Its something we could only describe as being Severely Jazzed. And so it was. Severely Jazzed was born.

Give us a two-sentence pitch for your upcoming show Trout Stanley.
H: A modern day Fairy Tale, a rock and roll dance party, a murder mystery; Trout Stanley is a delicious dream that you never want to wake up from.

What drew you to this piece?
H: Trout Stanley is one of those rare plays that is a really satisfying mix of genre and tone. It’s funny, it’s dark, it’s touching, it’s dirty. It’s wonder-full (as in, literally filled with wonder).

The script itself is so poetic that even just reading it conjures a complete world- a world that is at once strange and deeply relatable.

The language of the play is incredible. It’s as if it takes place in an alternate universe where a grasp on metaphor and imagery is a basic need. And that need- to express in terms outside of what might be considered “normal”- really spoke to me.

T: Me too. The strangeness of the play- it was like nothing I had ever read before. It felt so intimate- so specific to my own personal, private nature. Those parts of being alive that are rarely seen, but instantly identifiable, and are often so funny, or so pathetic.

I have since spoken with many people- theatre artists and otherwise- who have had this same deeply personal reaction to the play. It has a definite cult following; it gets in your bones.

There’s also this incredibly complex relationship between the two women at the heart of the play. The characters are twins but their domestic relationship has evolved to become almost spousal. They’re living in the outskirts of a mining town in BC, outside social norms; their animal natures come out. Its really complex. Really exciting to dig into as performers. As women.

How are you putting your own spin on it?
H: Daniel Pagett’s vision is really bold. Him and designer Hanna Puley have used the themes of innocence (most represented in Sugar) and vanity (in Grace) as departure points for the design, setting the characters in a kind of crystal-palace approximation of their outback home. The design hints at the psychology of the central women, and the magic-mystical world the Ducharme sisters have created to protect themselves from tragic events in their past.

T: Daniel Maslany’s brilliant sound design sees the music of HEART- albeit fractured, and remixed, tangled as the sister’s history has been- as almost a fourth character in the play. It’s sort of the… rock-and-roll foundation to their crystal castle!

H: Actually, in that analogy the music is the fifth character! Without giving too much away, those familiar with the play might find there are some surprises- one of which is the number of performers involved…

Tell us about the cast and creative team.
T: We’re so fortunate to be surrounded by so many incredible artists. I honestly believe we have some of the city’s most exciting, diverse, and innovative emerging artists, all at definitive moments in their careers. It feels like we’re all taking this leap together.

H: The creative team includes director Daniel Pagett who is hot off his lauded directorial debut of The Skriker; actor and writer Colin Munch– a frequent collaborator with Theatre Brouhaha and recent Fringe VIP (NOW Magazine); actor and improvisor Dan Jeannotte, known best perhaps for lending his voice to the Assassin’s Creed video game franchise (for which he just won an ACTRA Montreal Award); film and theatre designer Hanna Puley, currently having a banner year designing the world premiere of John Patrick Shanley’s A Woman is a Secret, and season two of CTV’s CSA-winning Space Riders. Designing sound is Daniel Maslany, an incredible actor writer, improvisor, and all-around creative force. The lighting is designed by Melissa Joakim who worked with Daniel Pagett previously on The Skriker and who recently designed Kat Sandler’s hit Liver.

H: It’s a really eclectic and exciting team, almost all of whom share a background in improvisation. This has provided a grounding common language, and place to begin exploring the characters’ playful/ tragic universe.

Where and when is the show playing? How can we buy tickets?
The show is playing at The Storefront Theatre. 955 Bloor Street West. It runs May 21 – June 6. Saturday and Sunday Matinees. No shows Mondays. Tickets available at secureaseat.com.