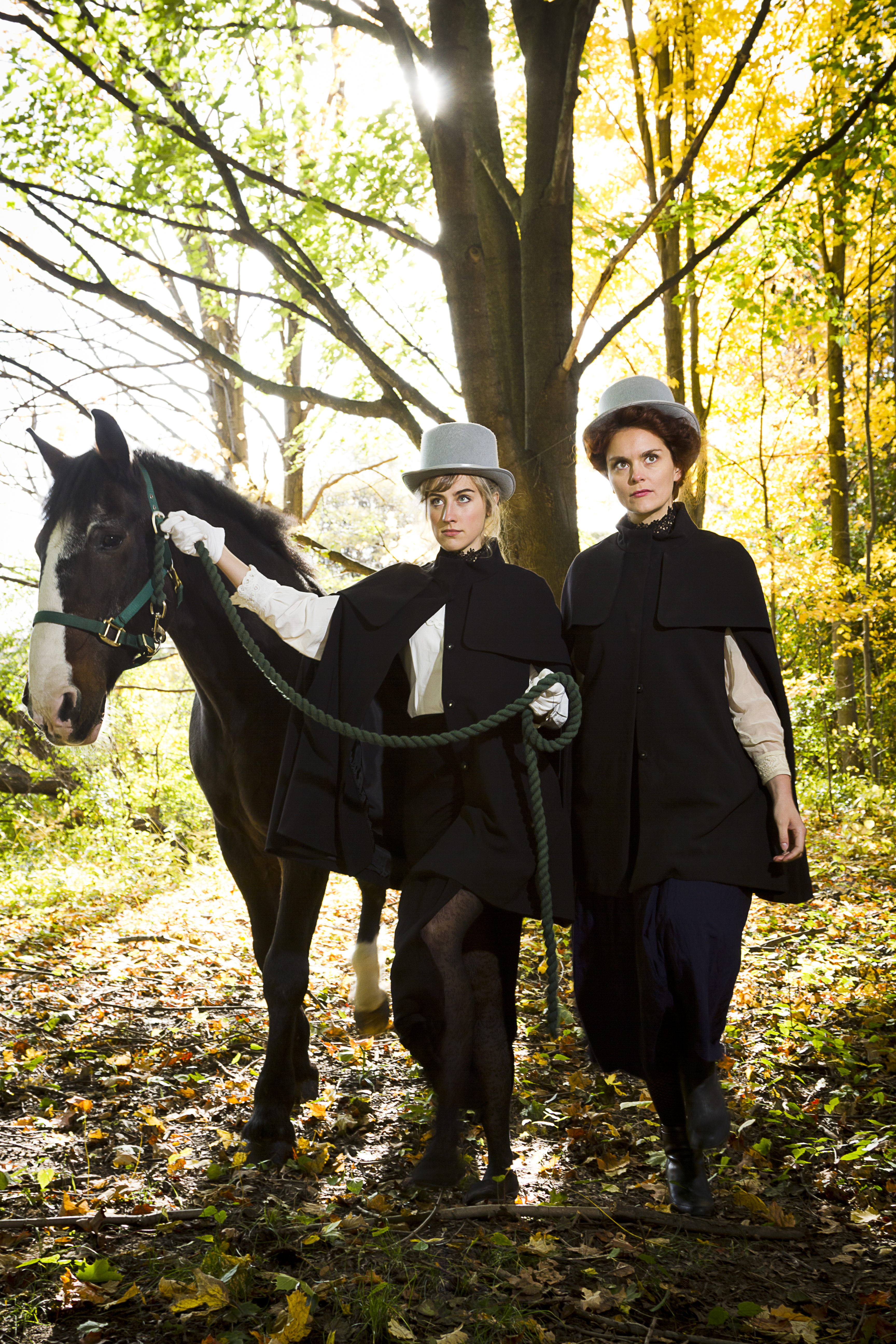 Toronto-based comediennes Gwynne Phillips and Briana Templeton (winner of the 2011 My Theatre Award for Best Actress) are the sketch duo behind some of the indie circuit’s most inventive and emotionally resonant work. Together they make up the perfectly named Templeton Philharmonic, the award-winning team who brought the fantastic site-specific roller-coaster An Evening in July to last summer’s Toronto Fringe Festival.

They’re back again under the Fringe umbrella for January’s Next Stage Theatre Festival.

We caught up with Gwynne and Briana to get the scoop on their new show.

Give us a two-sentence pitch for your upcoming Next Stage show “Unbridled & Unstable”.
B: A smart and off-kilter sketch comedy with a smattering of dance.

G: That’s only one sentence!

B: Oh shoot. How about: A smart and off-kilter sketch comedy show with a smattering of dance… and some of it is about ponies.

What inspired this piece?
G: Well, it had been a while since we’d focused on writing sketches. Over the past year or so, we’ve had a lot of exciting opportunities to work with different formats.

B: We made some site-specific, period pieces together (“Sockdolager” which was set in the 1920’s, and “An Evening in July” which was 1970’s inspired). Both were dark comedies where we tried to immerse audiences in a different world. Letting them explore an unconventional theatre set, while still having it be funny.

G: We also made a webseries for CBC Punchline (the CBC’s new digital comedy platform). Our series is called “Womanish” and is about two twenty-something women stuck in “adult-lecense” and trying to make it in the Toronto arts scene…. (Jokingly) Not inspired by our real lives WHATSOEVER.

G: So, we applied to the Next Stage Theatre Festival with a full-length sketch show in mind. Sketch is a really fun way to do character-based comedy that we had put to the side for a while. In this show, a lot of the sketches are loosely inspired by horses.

B: Hence the title “Unbridled & Unstable”. If you love puns. Boy, do we have a show for you!

G: But it’s not ALL horse themed because that would get old quickly. We’ve also got one where we play monks; one about the 2015 Pan Am Games; one about a book club meeting that goes off-the-rails…

B: A lot of them are a twisty and surreal. But also super silly. The show’s been a very fun one to rehearse since we play so many over-the-top characters.

How did you get involved with the Next Stage Festival?
B: Back in July, we performed “An Evening In July” at the Toronto Fringe. The plot involved two reclusive sisters that host a surreal, and glamourous garden party that ends in tragedy. It was loosely inspired by the documentary “Grey Gardens”. It dealt with themes of loss and memory, but it was still a comedy. Somehow.

G: It was an immersive show as well – meaning the audience was free to interact by picking up props (like books and photos) and by wandering around the set. We also let people play with a giant pink, parachute! The show was a success through word-of-mouth and positive press which helped us land a spot at Next Stage, which is a curated wintertime festival that’s produced by the Fringe.

B: We were super flattered because Next Stage is such an awesome, growing thing. We’re excited to get to do it.

Walk us through the development & rehearsal process.
B: Our writing is often character-based. So, we usually start with ideas of characters we’d like to play and then go from there.

G: We write a lot of sketches in-tandem. So, Google Drive is a blessing.

B: Usually, we’ll figure out the beats of a sketch on paper – and then improvise until we establish a rhythm and wording that we feel works.

How does Unbridled & Unstable compare to your previous work?
G: With this show, we’re definitely not shying away elements of weirdness in our sketches.

B: In terms of set and costumes, it’s more minimalist than our site-specific stuff. But, that’s very freeing since allow us to have a huge variety of scenes without getting bogged down with set changes, etc.

G: But over all, the show has a similar flavour to our past shows…

B: It’s going to be surreal, and super-theatrical. There are elements of social commentary, but it doesn’t take itself too seriously.

G: Basically, we’ve created the ultimate show that WE would want to watch in the middle of January to distract us from the gloom. Entertaining and over the top comedy that cheers you up while making you think at the same time.