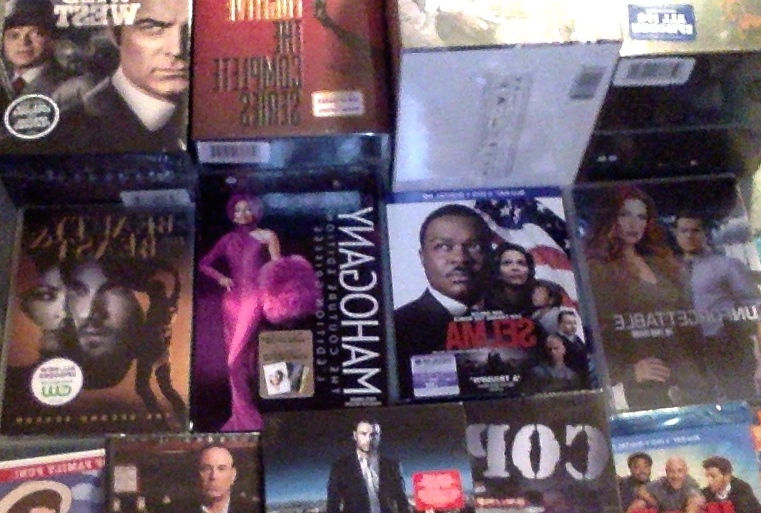 Selma (May 5)
If you’re going to buy a movie on DVD (and I understand why you wouldn’t), this is the one to get. The Blu-ray/DVD/Digital combo pack is pricey ($39.99; a better deal than the bare-bones DVD at 29.99) but the special features are fantastic (a strong mix of historical and film-related features plus the “Glory” music video and two, thats’ right TWO audio commentaries with contrasting focuses- one a director/actor conversation, one a rare director/DP/editor track) and, more importantly, this is a completely re-watchable film (the key determining factor for whether something is worth owning). David Oyelowo is so fantastic you’ll need to re-watch just to wrap your head around it. Also, Oprah (guys, Oprah is a great actress; it’s weird that we’ve allowed ourselves to forget that).

Children’s Classics Collection (May 5)
This odd mishmash of classic characters on mostly new adventures feels very knock-off-ish, even if they have been appropriately licensed (I’m assuming they’ve been appropriately licensed, even though Dorothy looks NOTHING like Dorothy). I also expect more than 3 hours of material if I’m going to shell out for a DVD instead of looking online. Better to just show your kid the actual classics.

Complete Series Sets (May 5 & 12)
This month’s contributions to Paramount’s fantastic ever-expanding library of complete series on DVD are all macho classics including The Fugitive, the sprawling 120 episode epic that bridged the black & white-to-colour gap during its TV run in the 60s then spawned the beloved 1993 film. The others are a series of westerns of wildly varying quality, the 104 episodes of The Wild Wild West that came before Will Smith got involved, a whopping 217 episodes of Clint Eastwood (if you like that sort of thing) in Rawhide, and then, many steps behind them in the race to be considered a “classic”, Chuck Norris’ Walker, Texas Ranger. I said last month that Complete Series are the best thing to buy on DVD and, in the case of something like The Fugitive, I stand behind that (you really need to see that whole show to see that show at all). I’m not, however, convinced anyone needs to watch 198 episodes of Walker, Texas Ranger.

Single Season TV on DVD (May 12 & 26)
Unforgettable– the weird zombie series (in that it keeps coming back to life; it’s not about zombies, it’s about a cop with a good memory), Beauty & the Beast– the cop show pretending to have something to do with fairytales, and Ray Donovan– the darkest timeline version of Scandal, are the latest single-season releases from Paramount Home Distribution, one representative from each of the major CBS TV hubs (CBS, The CW and Showtime), none of them the star of their networks (those would arguably be The Good Wife, The Flash and Homeland) but none the biggest dud either (well… nevermind).

Spike TV “Best Of”s (May 19)
Oh, Spike TV, I’m so not your demographic. But because I’m so not your demographic, I’m not really sure that your demographic has any interest in buying Best-Of DVDs. The Best-Of I Love Lucy? That’s a thing humans would buy. But Cops: Wildest Chases and Bar Rescue: Touchest Rescues? Who is the market for this? Out-of-touch uncles buying presents for their uncommunicative 14-year-old nephews? Frat boys trying to find something to leave in the DVD player that they won’t miss if destroyed? Misguided bros buying “congratulations on making bail” gifts? These are shows guys watch in the background because they happen to be on, like how my mother watches Say Yes to the Dress (actually, more like how she watches House Hunters; she really focuses when Say Yes to the Dress is on). Why do these DVDs exist?!

Hot Tub Time Machine 2 (May 19)
Um, well, this ridiculous and totally unnecessary sequel replaces John Cusack with Adam Scott and, while this is definitely a minority opinion, I consider that a pretty big upgrade. That’s not an endorsement of Hot Tub Time Machine 2 (in general or over its predecessor), I just wanted to take a moment to share with you the extent of my love for Adam Scott (can we take a moment to reminisce about Parks & Rec? How great was that final season?!). Unlike the final season of Parks & Rec and my great love of Adam Scott, there’s not much to say about Hot Tub Time Machine 2– if you really really loved the first one, you will like this one (just less). If you really really hated the first one, you will hate this one (just more). I mean, it’s called Hot Tub Time Machine 2, you should know what  you’re getting yourself into before you hit play. Note: I have the Canadian edition of the Blu-ray/DVD/Digital combo pack (which does not make enough use of its hilarious cast for fun “look, we’re all friends!” special features) and I think it’s important that you know that the French title of this film is Le Spa à Remonter Dans Le Temps 2.

Team Umizoomi: Meet Shark Car! (May 26)
As a human adult with no children I really need to just say that the title Team Umizoomi: Meet Shark Car! has to be an indication that we’re officially not in Kansas anymore. I mean, really, TEAM UMIZOOMI: MEET SHARK CAR! WHAT IS HAPPENING TO THE WORLD?! As a person reviewing this DVD and not obsessing about its title, I will say the following: This is great because kids love to watch the same thing over and over again (these 91 minutes will get you surprisingly far) but, really, what’s the point in owning this sort of thing (compared to, say, a Netflix Kids subscription)? Once they grow out of it (and they Will grow out of Umizoomi, this is not like my much-watched, wildly beloved old puffycase copy of Mulan), you’re stuck with it, and it’s nearly impossible to get rid of unwanted DVDs these days. #UmizoomiProblems